Heat waves and floods that used to happen once in a century, have become a daily reality, and 2019 is completing a decade of unprecedented heat. 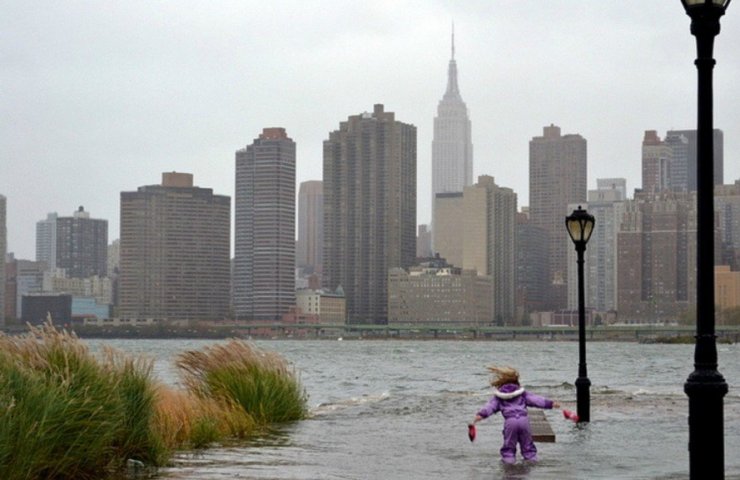 across the planet, burning forests, including in Siberia and Alaska, rapidly melting glaciers, are heated and oxidized in the oceans, sea levels are rising and the consequences of global warming caused by emissions of greenhouse gases in the atmosphere. This is stated in the preliminary report the world meteorological organization (WMO), prepared for discussion at the meeting on climate change in Madrid. A final report on the state of the climate with complete data for 2019 will be published in March next year.

"Daily effects of climate change manifested in the form of extreme and abnormal weather events.... Periods of extreme heat and flooding that used to happen once in a century, are becoming more common. A disastrous tropical cyclone struck many countries, from the Bahamas to Japan and Mozambique. Forest fires have covered the Arctic and Australia" - so summarised the state of climate, General Secretary of WMO, petteri Taalas, presenting a new report.

Experts of WMO reported that the planet continues to heat up. The global average temperature in 2019 - from January to October was about 1.1 degrees Celsius higher than in pre-industrial period. Since the 1980s, the years each successive decade has been warmer than the previous one. 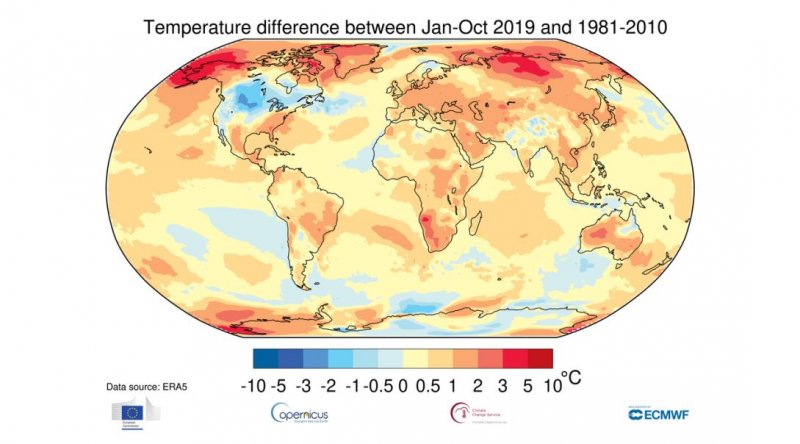 "If we do not take urgent action to combat climate change, by the end of the century we can expect a temperature rise of more than 3 degrees Celsius, which will lead to even more disastrous consequences for the inhabitants of the Earth," - said petteri Taalas. At the same time, he noted, "we haven't even embarked on the path to achieving the goal of the Paris agreement". Recall that in 2015 in Paris States have agreed to prevent the increase in the average global temperature higher than 2 degrees Celsius, and even better to keep it within 1.5 degrees.

the authors of the new report suggest that 2019 will be the second or third warmest year in the history of mankind. And the main reason for this is the growing emissions of greenhouse gases associated with human activities.

In 2018, the concentration of carbon dioxide, which is the main long-lived greenhouse gas in the atmosphere have reached new maximum values compared to the pre-industrial level, it increased by 147 percent. It continued to increase in 2019. Experts say that CO2 persists in the atmosphere for centuries, and in the ocean for even longer, and thus contributes to further climate change.

the Ocean is warming, glaciers are melting, sea level is rising

Ocean, which acts as a buffer, absorbing heat and carbon dioxide, suffers the most. In 2019, the ocean warmed to record levels. Besides, sea water is now 26 percent kislotnye than at the beginning of the industrial age. The degradation of vital marine ecosystems.

due to the melting of the ice sheets in Greenland and Antarctica has accelerated the rise in sea level. So, in October 2019 average of the world level has reached the maximum value since the beginning of high-precision altimetry measurements in January 1993.

Daily minimum sea-ice extent in the Arctic in September 2019 was the second lowest in the history of satellite observations. In Antarctica during certain months of 2019 were also recorded record lows in sea ice.

In the Central United States, Northern Canada, Northern Russia, and in South-West Asia have experienced anomalously high precipitation. Average rainfall for 12 month in some US States for the period July 2018 to June 2019 (962 mm) was the highest in the entire history of observations. Experts also link this trend with climate warming.

Forest fires and the extreme heat

the new report States that at the end of June and July in Europe swept a strong "heat wave". In France June 28, was set the national record at 46 degrees Celsius, or 1.9 degrees above the previous record. The unprecedented heat was recorded in Germany, the Netherlands, Belgium, Luxembourg and the UK. Exceptionally hot summer was in Australia, where January was the warmest month on record in this country.

this year frequent forest fires, including in the Northern regions, including Siberia and Alaska. Fires blazed in many parts of the Arctic where previously they were very rare.

the Consequences of climate change: the health of the population and mass movement

a Large section of the report devoted to the influence of weather and climate on human health, food security, migration, and ecosystems. The authors of the new study noted that from January to June of 2019, more than 10 million people were forced to leave their homes and become "climate refugees". Seven million of them withdrew from the field, escaping from the cyclone "IDI" in South-East Africa, cyclone "Fanny" in South Asia, hurricane "Dorian" in the Caribbean, and floods in Iran, the Philippines and Ethiopia.

In 2019 record high temperatures in Australia, India, Japan and Europe have had a detrimental impact on the health and well-being. In Japan in late July-early August in 2019 as a result of heat more than 100 people were killed and 18 people were hospitalized. Unprecedented heat has become the reason for the increase in mortality rates this summer and in Europe.

Current report should be another call to action for state representatives, gathered these days in Madrid at a conference on climate. The UN Secretary General has called the current climate crisis an "emergency on a global scale. Opening of the Madrid meeting of the parties to the UN Convention on climate change, he urged them to go the way leading to disaster, and to take immediate measures to curb climate change.

Финансовая аналитика, прогнозы цен на сталь, железную руду, уголь и другие сырьевые товары. More news and analytics on Metallurgprom telegram channel - subscribe to get up-to-date market information and price forecasts faster than others.
Сomments
Add a comment
Сomments (0)
On this topic
Yuzhmash told whether it is possible to launch reusable rockets from the Black Sea
Top 10 digital trends in the global steel industry
Elon Musk announced the recruitment of several thousand engineers for the "Starbase" in
UN Secretary General urged to declare a state of emergency in the field of climate and proposed six
How can integrated subsoil use objects help the development of raw materials exports in Ukraine?
The transition to a carbon-free economy is actually not as expensive as they say - the experts
Recommended:
Alisher Usmanov's Metalloinvest postponed the expansion of rebar production in the UAE
Recovery in China could be key to rising global steel prices - MEPS
Price volatility hits global steel market
News Analytics
The United States refused to impose duties on Russian metals and increase02-07-2022, 09:05
Daimler Truck began testing Actros tractor on liquid hydrogen02-07-2022, 08:54
Volvo invests $1.25 billion to build electric vehicle plant in Slovakia01-07-2022, 18:17
Swedish court authorizes construction of steel mill for the first time in 5001-07-2022, 11:09
AvtoVAZ plans to produce at least 400,000 vehicles in 202301-07-2022, 11:29
High iron ore shortage could halt metallurgy's green transition28-06-2022, 14:02
Price volatility hits global steel market27-06-2022, 19:28
Recovery in China could be key to rising global steel prices - MEPS24-06-2022, 14:00
Conflict in Ukraine spurs Europe's drive for clean energy03-06-2022, 12:14
US steel market sentiment becomes more price neutral05-05-2022, 10:15
Sign in with: