Oil-loading supertankers, idle due to coronavirus, may go for scrap

Falling oil prices and skyrocketing scrap prices could force tanker fleet owners to look at their assets from an unexpected angle. 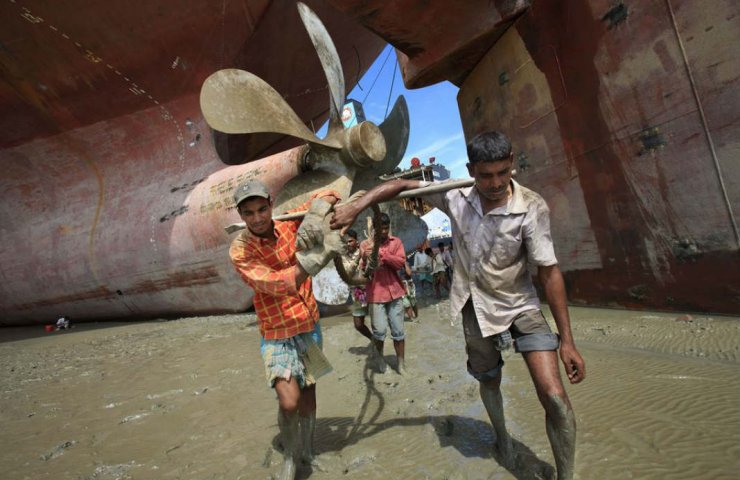 The coronavirus pandemic is disrupting the market for large tankers that deliver nearly a fifth of the world's oil, and threatens a scrapping boom in Bangladesh, India and Pakistan due to rising scrap prices, tanker executives told Bloomberg.

They noted that the decline in profits makes them think about selling ships over 15 years old for scrap. They explained that every five years they have to undergo special surveys costing millions of dollars, which are difficult to find when tanker companies suffer losses.

According to the forecast of Clarkson Research (a division of the world's largest ship broker Clarkson Plc), about 2% of the oil tanker fleet will be utilized in 2021. In 2020, only two large-capacity tankers of the VLCC class (Very Large Crude Carrier, length - 330 m, deadweight up to 320,000 tons) were scrapped. In 2019 - four. For comparison: in 2017-2018, the Clarkson Plc fleet included 823 VLCC tankers.

Clarkson Research notes that price is an added incentive to ditch the tanker: the VLCC scrapped tanker currently stands at $ 18.95 million, the highest since March 2018.

The agency notes that due to a surplus of tankers last week, tanker companies were forced to subsidize the delivery of cargo along the busiest trade route from the Middle East to Asia. The surplus has been observed since the beginning of 2020, when the demand for oil fell sharply due to the coronavirus pandemic, but until recently it was leveled by the fact that a huge part of tankers simply stored crude oil, which turned out to be excessive for the market. However, now, when oil consumption in the world has grown, this oil from tankers is sold out and they remained unclaimed, since OPEC + countries are holding millions of barrels from being supplied to the market.

A recovery in shipowners' income may occur in the second half of the year, when oil demand is forecast to return to pre-pandemic levels. But they don't have to rejoice yet.

"It is difficult to imagine circumstances that would be more unfavorable for tanker owners than they are now," Brian Gallagher, head of investor relations at Euronav NV (the third largest owner of supertankers in the world), told the agency. He acknowledged that such attractive scrap prices are changing the attitude of owners towards older tankers.

Recommended:
Illegal mining and logging in Ukraine will be monitored from space
Director of the Norilsk Concentration Plant detained in connection with the death of workers
Tesla will become a strategic partner of one of the largest nickel mines
On this topic
2021 will be the year of rapid development of private astronautics
Prospects for ship repair in Ukraine
How Tesla became the world's most valuable automaker
Yuzhmash told whether it is possible to launch reusable rockets from the Black Sea
How the reform of the electricity market in Ukraine can lead to a collapse and what to do about it
Stopped nuclear power plants and mines. What's going on in the energy sector of Ukraine?
Add a comment
Сomments (0)
News Analytics
Coronavirus drove Belgian skiers to the slopes of the Charleroi waste heap07-03-2021, 13:52
US Steel focuses on the production of nanosteel for high-strength alloys07-03-2021, 13:46
Poland could lead the race in hydrogen steel technology07-03-2021, 11:29
US Senate Adopts $ 1.9 Trillion Stimulus Package06-03-2021, 23:54
Tibet invests about $ 30 billion in infrastructure projects in 5 years06-03-2021, 14:39
Spread between raw materials and high strength alloy steel in Europe increased01-03-2021, 20:21
Increase in prices is forecasted in the markets of steel raw materials -26-02-2021, 09:25
Troy ounce of gold will drop $ 500 in two years - Fitch25-02-2021, 18:29
Global iron ore production growth to outstrip cumulative production in India23-02-2021, 10:22
Fitch Ratings Warns of “Shocking Impact” on Fossil Fuel Exporters18-02-2021, 14:44
Sign in with: