To take measures that will allow us to adapt to the new reality, assess potential risks and prepare for them in advance - UN Secretary-General Antonio Guterres called for this, speaking at the adaptation summit organized by the Netherlands. 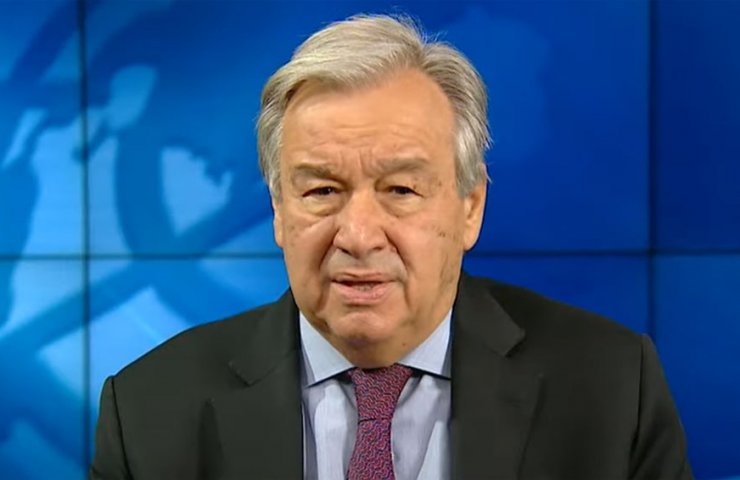 The economic crisis that followed the pandemic was the worst in a century. This was announced by UN Secretary General Antonio Guterres, speaking on Monday via video link at the high-level event "Davos Agenda".

"More than 2 million people have died, and we are in the worst economic crisis in about 100 years," he stated.

At the same time, Guterres expressed confidence that in 2021 the world "has a unique opportunity to move from fragility to resilience in the recovery from the COVID-19 pandemic." For this, according to the Secretary General, it is necessary that “governments, international organizations, the private sector and civil society work together.”

"Our common direction should be the achievement of the Sustainable Development Goals," he said. In this regard, the UN head also recalled his initiative for a New Social Contract and a New Global Compact, which "will create equal opportunities for all while ensuring universal rights and freedoms."

Unprecedented and less and less predictable extreme natural events create an emergency on a global scale, the UN head stressed. Over the past decade, weather and climate disasters have killed 410,000 people, most of them in poor countries. At the same time, according to the Global Adaptation Commission, if you know about an impending hurricane or extreme heat in just 24 hours, you can reduce the damage from them by 30 percent.

This is why the Secretary-General is calling for immediate attention to adaptation and resilience to natural disasters and their inclusion in recovery plans from the COVID-19 pandemic. And this applies not only to developed countries - we need to help low- and middle-income countries “restart” their economies and embark on the path of sustainable development.

Antonio Guterres has identified five priorities. First, in his opinion, donor states, as well as development banks, should provide more predictable financial support. Annual expenditures on adaptation and resilience to extreme climate change in developing countries are estimated at $ 70 billion, and by 2030 and 2050 these figures will grow, respectively, to 140-300 billion and 280-500 billion. Therefore, the head of the UN proposes to allocate for adaptation and the sustainability of half of the financial assistance provided by donors and banks to combat climate change. Guterres recalled that by signing the Paris Agreement, rich countries pledged to allocate $ 100 billion a year to poor countries to mitigate and adapt to climate change.

Secondly, in any budgets and investments it is necessary to include climate risks - this is especially true for investments in infrastructure.

The Secretary General also called for a wider use of existing and development of new financial instruments that would create incentives for investors. Every dollar invested in infrastructure resilience can save six dollars, he said.

Another area is debt relief and access to finance for countries most vulnerable to climate change. So far, the share of least developed countries and small island states among recipients of climate finance is 14 percent and 2 percent, respectively. But it is they, on the one hand, who suffer more than others from the effects of climate change, and on the other hand, they have much fewer resources to cope with them.

The Secretary-General also called for support for regional initiatives aimed at adapting to new realities, such as “debt-for-adaptation” for the island states of the Caribbean or the Pacific.

"We have at our disposal all the tools, knowledge and capabilities necessary to act" larger, faster and more efficiently "in the field of adaptation to climate change," - said the UN head and called on the summit participants to "make a breakthrough" and together move towards a sustainable and equitable future.

This summit is the first meeting of world leaders dedicated to the climatic aspects of recovery from the COVID-19 pandemic. Its participants are expected to adopt a comprehensive Adaptation Agenda for the next decade.

Recommended:
Elon Musk invited Vladimir Putin to the online chat Clubhouse
The largest energy company in Ukraine asks the state to intervene in the situation with coal supplies
Chinese Mars probe "Tianwen 1" completes fourth orbital correction
On this topic
UN Secretary General urged to declare a state of emergency in the field of climate and proposed six
UN chief called for full decarbonization of the world economy
UN head announced the possible death of humanity before the end of this century
UN Secretary General calls on Armenia and Azerbaijan to immediately stop hostilities
UN Secretary-General on the situation in the world: wind of hope has been replaced by wind of
The UN Secretary General in Davos stated that without reductions in greenhouse gas emissions "we
Add a comment
Сomments (0)
News Analytics
Georgia's economy shrinks by 11.5% in January26-02-2021, 21:21
Ukraine retained its position in the world ranking of steel producers and rose26-02-2021, 15:52
ArcelorMittal has raised prices for galvanizing for the European market to 90026-02-2021, 13:23
The European Commission initiated a new investigation on steel imports to26-02-2021, 13:22
A rally of workers of the stopped shipyard was held in Mariupol26-02-2021, 12:34
Increase in prices is forecasted in the markets of steel raw materials -26-02-2021, 09:25
Troy ounce of gold will drop $ 500 in two years - Fitch25-02-2021, 18:29
Global iron ore production growth to outstrip cumulative production in India23-02-2021, 10:22
Fitch Ratings Warns of “Shocking Impact” on Fossil Fuel Exporters18-02-2021, 14:44
Raw material prices rise by about 10.5% in January 2021 - Deutsche Industriebank12-02-2021, 10:48
Sign in with: