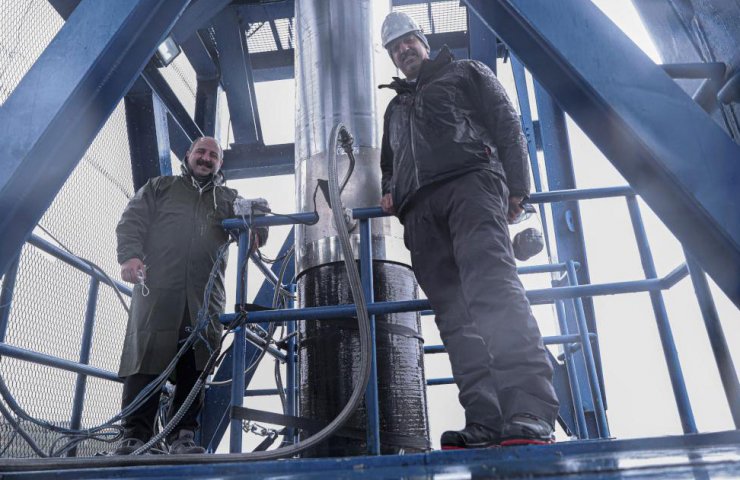 A domestically produced hybrid rocket engine for an unmanned spacecraft has successfully passed the first tests in Turkey. This was announced by the Minister of Industry and Technology of the country Mustafa Varank during a visit to the facilities of Delta V Space Technologies - the company that has developed a unique national hybrid rocket engine and unmanned spacecraft.

The Minister was told about the technical features of the project of an unmanned spacecraft, which is to land on the moon in 2023 - to the 100th anniversary of the Republic of Turkey. Mr. Varank also inspected the command post where rocket engine tests are carried out. The head of the Ministry of Industry told the Anadolu agency about the successful testing of rocket engines.

“As you know, our goal is to send a domestic spacecraft to the moon by 2023. In this process, we used all the capabilities of our companies, ”said Mustafa Varank. The minister said that a test launch of the rocket engine for the vehicle, which is planned to cover a significant distance, will take place in May in Sinop province.

“We believe we will successfully complete the first phase of our lunar mission in 2023. We will raise the flag of Turkey on the moon. In this regard, we are very pleased and proud that we have successfully carried out the first tests of the rocket engine, ”the minister said.

In turn, the general director of Delta V Space Technologies Arif Karabeyoglu announced plans to launch probes at high altitudes in May. “Today we tested the rocket engine of the spacecraft that will go to the moon. We are approaching the moon step by step, ”he added.

Recommended:
Brazil is interested in the production capabilities of Yuzhmash
ArcelorMittal is the best employer in the MMC of Ukraine in 2021 - research results
China's foreign trade turnover grew by 29.2% in the first quarter of 2021
On this topic
Virgin Galactic unveils polished stainless steel spaceplane
The historical path from the Energia-Buran project to the Zenit space rocket complex
Mars spaceship prototype explodes again on attempted landing
NASA Accelerates Mission to $ 10,000 Quadrillion Metal Asteroid
What technologies help robots to become human?
Virgin Galactic reveals the interiors of the new space plane
Add a comment
Сomments (0)
News Analytics
Объемы заготовки металлолома в Украине увеличились на 30,3%06-05-2021, 19:19
Gold rises above $ 1,800 an ounce for the first time since February06-05-2021, 18:41
The European Union approved the use of mealworms06-05-2021, 14:40
The mining and metallurgical complex of Ukraine requires more than $ 10 billion06-05-2021, 13:57
Rinat Akhmetov's fortune during the pandemic grew 2.7 times from 2.8 to 7.606-05-2021, 10:21
The current state of the market is ideal for the sale of rolled steel - IREPAS04-05-2021, 18:41
Global hydrogen demand to grow 7-fold by 2070 - PwC21-04-2021, 12:31
World Steel Association predicts a good year for metallurgists15-04-2021, 18:19
World Steel Association defines green steel and its variations12-04-2021, 13:14
China unlikely to cut steel capacity in 2021 due to high steel prices07-04-2021, 12:11
Sign in with: