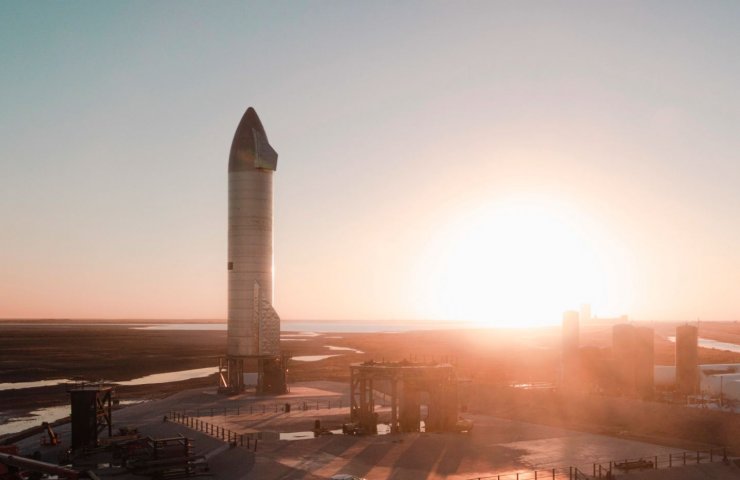 Starship SN9 was propelled during the ascent by three Raptor engines, each of which is shut down sequentially before the craft reaches its apogee - about 10 km.

The prototype landed under active aerodynamic control, carried out by the independent movement of two forward and two aft flaps. All four flaps are activated by the on-board computer to control the Starship's position during flight and ensure an accurate landing at the intended location. During the landing, an explosion occurred, as a result of which the prototype was completely destroyed.

despite the explosion, this flight was not unsuccessful. Starship is still an early prototype and SpaceX engineers have gathered all the data they need. Also note that SpaceX's next prototype spacecraft, SN10, is already on the launch pad to begin its flight tests.

Controlled aerodynamic descent with hull flaps and vertical landing capability, coupled with refueling in space, are critical to landing a starship at destinations across the solar system, where there are no prepared surfaces or runways, and returning to Earth. This capability will create a fully reusable transport system designed to transport both crew and cargo on long interplanetary flights, and help humanity return to the Moon, go to Mars and beyond.

Recommended:
Hot rolled steel prices in the US close to $ 1,500 per tonne
Severodonetsk Azot Group DF increased the production of mineral fertilizers by one and a half times
ArcelorMittal is the best employer in the MMC of Ukraine in 2021 - research results
On this topic
Shanghai relocates 5-story school building with a "walking machine" (Video)
Elon Musk has decided to change the grade of steel for plating spaceship Starship
SpaceX launches 60 more satellites for its broadband internet project
Apple Watch Series 5: How Lighter Is Titanium Compared To Stainless Steel?
New Russian steel for oil pipelines prevents leaks
Add a comment
Сomments (0)
News Analytics
China's Non-Ferrous Metals Sector Records High First Quarter Profits08-05-2021, 15:43
Copper price rises to a record high08-05-2021, 10:17
Dneprotyazhmash manufactures technological equipment for DMK07-05-2021, 10:07
The National Bank of Ukraine will sell 46 tons of scrap metal from obsolete07-05-2021, 10:10
Dnieper Metallurgical Plant DCH Steel in April reduced steel production by 2.8%07-05-2021, 09:18
The current state of the market is ideal for the sale of rolled steel - IREPAS04-05-2021, 18:41
Global hydrogen demand to grow 7-fold by 2070 - PwC21-04-2021, 12:31
World Steel Association predicts a good year for metallurgists15-04-2021, 18:19
World Steel Association defines green steel and its variations12-04-2021, 13:14
China unlikely to cut steel capacity in 2021 due to high steel prices07-04-2021, 12:11
Sign in with: