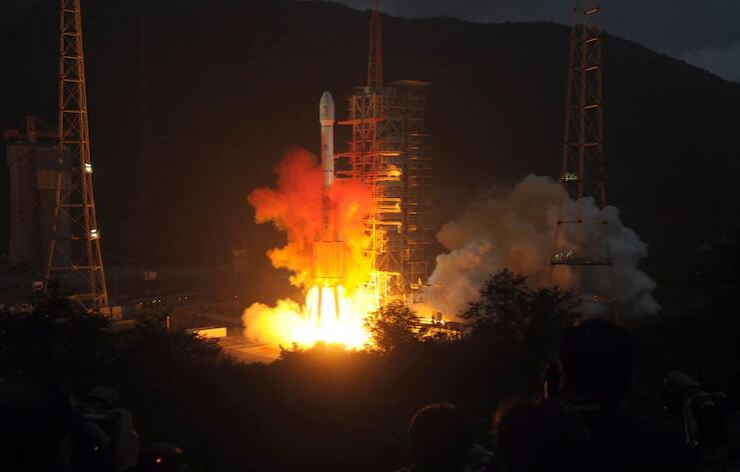 Elon Musk has had quite a few space-related issues over the past couple of weeks, but it looks like he may be able to remove the SpaceX rocket impact on the moon from his list.

Last month, astronomers and space enthusiasts spotted a huge piece of space debris orbiting the Earth that will meet its fiery end on the far side of the Moon within weeks.

The culprit, they thought, was a spent SpaceX rocket stage that helped get NASA's probe between Earth and the Sun.

It is now suspected that this piece of debris is most likely the third stage of the Long March 3C rocket launched by China in 2014 to reach the Moon.

Bill Gray, a US data analyst who tracks objects like asteroids floating around the solar system, posted a fix on his blog on Saturday.

This new development is based on circumstantial evidence, Gray wrote on his blog.

"But I would take that as pretty convincing evidence."

Why did astronomers think it was a SpaceX rocket stage?

The rocket stage was first discovered in early 2015 by the University of Arizona's Catalina Sky Survey, which scans the sky and tracks objects like comets as they travel closer to Earth.

A mysterious object has been spotted close to the moon. At first, astronomers thought it could be an asteroid.

But that was quickly ruled out: the mysterious object was circling our planet, and its behavior was much more in line with what humans had thrown there. On the other hand, the asteroid would have to revolve around the Sun.

Gray and others suspected it might be a SpaceX Falcon 9 rocket stage. "The object was about as bright as we expected and appeared at the expected time and orbit," Gray wrote.

So why is it part of a Chinese missile?

The email came from John Georgini, an engineer at NASA and the Jet Propulsion Laboratory at the California Institute of Technology. Georgini developed Horizons, an online database of objects moving in our solar system, from the sun to individual spacecraft.

The Horizons system revealed that the Falcon 9 rocket's trajectory did not pass close enough to the Moon to be the mysterious object first detected by the Catalina Sky Survey in 2015.

So Gray looked for other launches that could fit the bill.

He came across the Chinese Chang'e 5-T1, which was launched on a three-stage rocket on October 23, 2014.

The mission was a kind of test run for another, more ambitious mission to return the first moon rocks to Earth in decades. (This only happened in late 2020 when the real mission, Chang'e 5, successfully landed on the surface of the Moon.)

But back in 2014, the Chang'e 5-T1 consisted of a test return capsule attached to a spacecraft that was sent to orbit the moon before heading back to Earth.

The capsule separated from the spacecraft, re-entered the atmosphere and dropped into Mongolia for a safe landing. And the rocket stages remained in space.

According to Gray, the name of the object may change, but everything else remains the same.

The rocket stage will still crash on Friday, March 4 at 11:25:58 EDT (give or take a few seconds) in Hertzsprung Crater.