The new mineral, dubbed the "Chang'e Stone", was the sixth new mineral discovered by mankind in the history of lunar exploration. 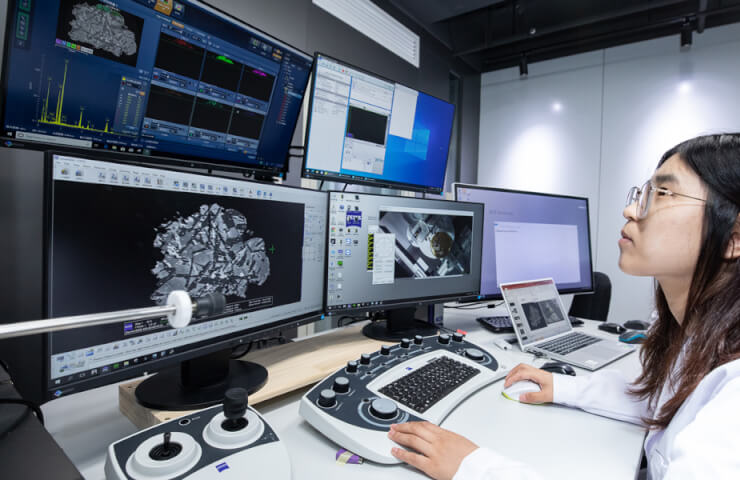 Chinese scientists have discovered a new mineral as a result of studying lunar soil samples delivered to Earth in 2020 as part of the Chang'e-5 mission. This was jointly announced by the China National Space Administration (CNSA) and the National Atomic Energy Agency of China (CAEA) on Friday.

China first discovered a new mineral in lunar soil. It became the sixth new mineral discovered by mankind in the history of lunar exploration. Thanks to this discovery, China has become the third country in the world to discover a new mineral on the moon, said CAEA deputy director Dong Baotong.

The new mineral, dubbed "Chang'e Stone", is a kind of colorless transparent columnar crystal. It was discovered as a result of the analysis of lunar basalt particles by a research team from the Beijing Research Institute of Uranium Geology (BRIUG) under the China National Nuclear Corporation (CNNC).

Chang'e Stone has been officially approved as a new mineral by the International Mineralogical Association (IMA) Commission on the Classification and Naming of New Minerals.

Финансовая аналитика, прогнозы цен на сталь, железную руду, уголь и другие сырьевые товары. More news and analytics on Metallurgprom telegram channel - subscribe to get up-to-date market information and price forecasts faster than others.
Сomments
Add a comment
Сomments (0)
On this topic
China ready to build an international research station on the moon - chief designer
The moon turned out to be much older: Chinese scientists updated the geochronological model of the
Chinese lunar module with mineral samples headed for Earth
China and Russia signed a memorandum on the construction of a research station on the moon
Chinese drilling probe successfully completed exploration on the Moon
Elon Musk's SpaceX rocket stage won't hit the moon as previously reported
Recommended:
Metinvest intends to receive compensation from Russia for the destroyed plants in Mariupol
Ukraine delivered 86,000 tons of iron ore to Turkey in September - TUIK
ArcelorMittal invests $25 million in nuclear technology development
News Analytics
Metinvest enterprises in Ukraine resumed work after massive shelling of29-11-2022, 11:59
The European Council added the violation of restrictive measures (sanctions) to28-11-2022, 14:22
The abolition of export duty in India may reduce the price of Turkish steel28-11-2022, 14:07
Australia and the UK aim to catch up and overtake China in the battery metal26-11-2022, 22:37
The United States imposed a ban on the import and sale of equipment from26-11-2022, 22:31
Commodity prices will fall, metals quotes will rise slightly - Focus Economics28-11-2022, 13:28
Platinum market to face shortage next year - WPIC22-11-2022, 18:25
Global steel demand falls and will fall by 2.3% in 2022: WorldSteel19-10-2022, 23:12
Iron ore prices fall to 11-month low15-10-2022, 10:36
China production cuts in winter will give limited boost to steel markets -15-09-2022, 10:09
Sign in with: