Platts: Real steel demand in China will fall by 36% in the first quarter

Inventory of steel in China is almost three times higher compared to the same period last year at 100 million tons, which creates great problems for the second quarter. 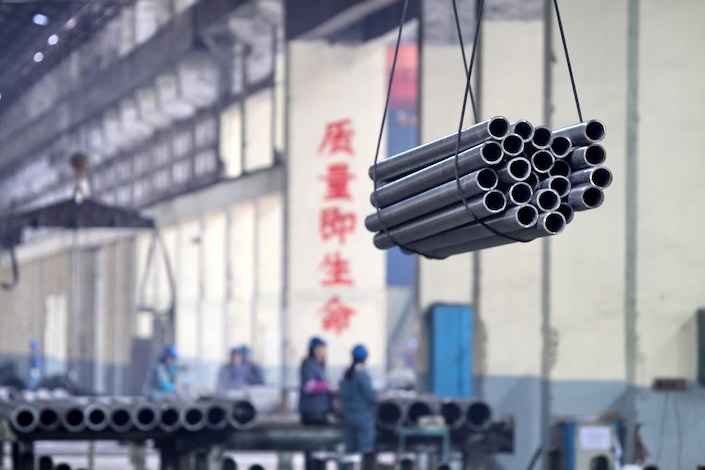 Internal production and construction activities in China could increase as its measures to block coronavirus softened, but the problems for the steel sector has just begun, writes on Monday, the S & P Global Platts.

Growing stocks of finished and semi-finished steel, owned by steel rolling and processing plants and traders - estimated S & P Global Platts, may reach 100 million tons by the end of March - will exert enormous pressure on China steel market in April and may.

Total reserves were almost three times higher than at the end of March 2019. It also corresponds to more than a month of domestic consumption last year.

"the Market cannot control a large part of the 100 million steel as it overflowed the storage capacity and stored in uncontrolled areas, as semi-finished products of steel, or is in the way," - said in Platts.

Production of finished steel in China decreased by 3.4%, or 6 million tons annually in comparison with January-February, while crude steel production increased by 3.1% or by 5 million tons, which indicates that a large amount of steel is in the form of semi-finished and is not counted in steel stocks tracked by the market.

Even if steel production in China may be limited at the current level, and its domestic demand and exports in the coming months will be 30% higher than in December, stocks are unlikely to fall to the level of March 2019 until may - and even if it was happens, it is such a high demand will stimulate steel production, slowing inventory reduction.

the Needs of end-users in April, or even may also be difficult to recover to the average level of 2019 and affect the inventory reduction began. Packages government incentives, no matter how strong they may be workable only when the people can work and navigate in large quantities, which is impossible until the pandemic coronavirus continues to violate the logistics throughout the world.

According to estimates by Platts, the real demand for finished steel in China in the first quarter will fall by 36% or by 70 million tons per year.

Although most construction sites and factories China is expected to resume by April, according to market research, the steel demand may remain lower than in the second quarter of 2019.

Manufacturers are unlikely to achieve full capacity in April and may, given the turbulence caused by the coronavirus pandemic on the demand and supply chains, both inside and outside China.

still easing monetary policy, China has focused on maintaining the liquidity of the business, not on the stimulation of consumer demand, which is difficult to stimulate as long as the pandemic is brought under control in the world.

Construction activity on existing projects in April will accelerate, but it is still unknown how to increase the additional demand.

previously, China has increased steel exports when its domestic market was crowded, but in the second quarter the demand for imports looks bleak, said market sources.

it is Expected that China's steel exports in March-April will be higher than in January-February, but it hardly approaches the level in 2019, equal to 6,327 million tons in March and 6,326 million tons in April.

while some Chinese mills began to cut production in March due to high inventories of steel and a limited cash flow, others have reduced or halted production in January or February, restarted or increased production due to improved logistics and improved demand.

the Most important factor behind the stable steel market in February-March, there was the expectation that China will release a strong policy stimulus at the end of the year, especially in the infrastructure and property sectors, which account for about 55% of the total steel consumption in China.

However, the market may soon discover that any policy stimulus is unlikely to be fully implemented, while people both inside and outside China will not be able to come together and move in large quantities.