Platts: steel Market of China will not be able to recover until the second half of the year

Vspyshka coronavirus struck the main consumer of steel in China's construction industry so much that no announced incentives will not be able to quickly restore the pre-crisis situation. 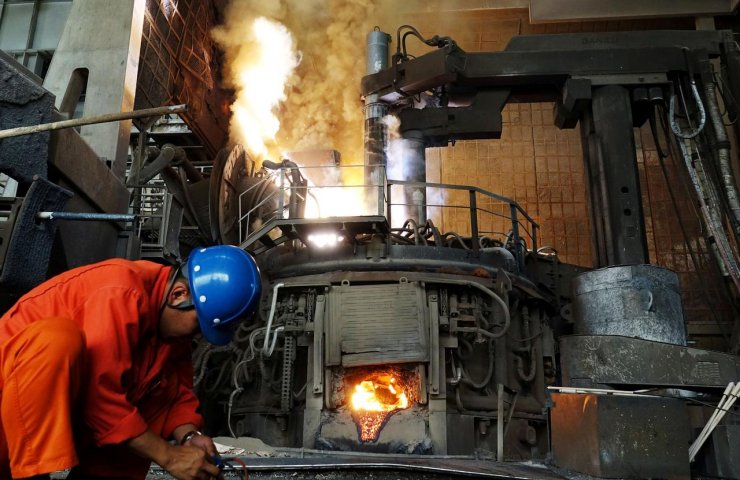 the Domestic steel market in China will continue to experience downward pressure in the second quarter due to high levels of steel production, the growth of warehouse stocks of metal, falling exports and weak demand in the manufacturing sector. This is stated in a research note rating Agency S & P Global Platts.

Problems with liquidity in the iron and steel enterprises in recent years has decreased, partly due to recovery in demand from end-users and partly due to the weakening of monetary policy of China.

According to the people's Bank of China, short-term corporate loans and corporate bonds issued in the first quarter increased by 119% and 91% yoy respectively. More than sufficient short-term liquidity has allowed steel manufacturers to maintain a high level of production, despite the fact that growing reserves are closely related to huge cash flows from businesses and traders.

analysis of the S & P Global Platts shows that the production of iron and steel in China in April is likely to be reduced by only 1.9% and 0.6% yoy respectively.

In addition to the relatively high steel production, rising inventories of steel products in China will continue to put pressure on prices. According to estimates by Platts, the stocks of finished and semi-finished steel in China in late March, has reached 100 million tons, which is three times higher than a year earlier.

According to the National Bureau of statistics, the crude steel in China in the first quarter rose 1.2% year on year, while the area of new real estate over the same period fell by 27.2%. Investments in fixed capital in infrastructure and production fell by 19.7% and 25.2% yoy, respectively.

steel Stocks declined in April, but in the middle of the month, they remained abnormally high, indicating that demand from the end-user was not strong enough to solve the problem of oversupply, according to market sources.

the Fixture has witnessed the greatest demand among steel products. Despite this, stocks of rebar that are owned by the traders in Hangzhou - one of the most active inland trade centres, was still 75% higher than a year ago, but 8 percent below its peak in mid-March, according to Platts assessments.

steel Demand from the wind energy, shipbuilding and production of steel structures has been high since March, which led to higher demand for heavy plate. But, these three sectors account for only 6% of total steel consumption in China.

it is Expected that China will set the economic goals and will announce a more detailed policy incentives to the National Congress and political consultative conference.

Some market sources believe that this year in projects of urban infrastructure will be added more incentives through such measures as the issuance of government bonds and an increase in the budget deficit. This is because maintaining employment is a top priority for the Chinese government in 2020, and infrastructure development is the most effective way to improve it.

as a result China is likely to be higher demand for steel in the 3rd and 4th quarters than in the 2nd, due to the acceleration of infrastructure development.

Recommended:
Metinvest announced the final stage of negotiations on the loan of 62 million euros
The German utility will help Thyssenkrupp to switch to hydrogen in steelmaking
The world health organization sent humanitarian aid to Ukraine
On this topic
Platts: Real steel demand in China will fall by 36% in the first quarter
Platts: 35% of the steel mills in China have cut output due to problems with the supply of raw
The largest metallurgical company of China Baowu may have become the world's largest
Platts: a new policy of India in relation to the steel scrap is of concern
S&P Global Platts: у рынка стали Китая мрачные перспективы
Емкость рынка конструкционной стали будет расти на 5 процентов в год до 2025 года
Add a comment
Сomments (0)
News Analytics
Strategy of defense in space07-07-2020, 10:49
AVTOVAZ predicts the fall of the Russian car market by 20-25%06-07-2020, 16:52
Novokramatorsky Mashinostroitelny Zavod re-entered the market of coke chemical06-07-2020, 16:50
DMK exceeded the plan of sales in June, shipping of metal less than a year ago06-07-2020, 16:35
Metinvest announced the final stage of negotiations on the loan of 62 million06-07-2020, 14:52
Steel prices in southern Europe are rising, despite weak demand23-06-2020, 10:54
Analysts expect strong demand growth for steel in China10-06-2020, 11:57
Global steel consumption in 2020 will be reduced by 6.4% - Worldsteel04-06-2020, 13:53
American steelmakers are faced with an unexpected problem associated with the14-05-2020, 09:09
Relying on the incentives, Chinese steelmakers increase production30-04-2020, 10:20
Sign in with: