Japanese manufacturers have presented an all-wheel drive modification of the new Note, which received a hybrid setup with two electric motors. 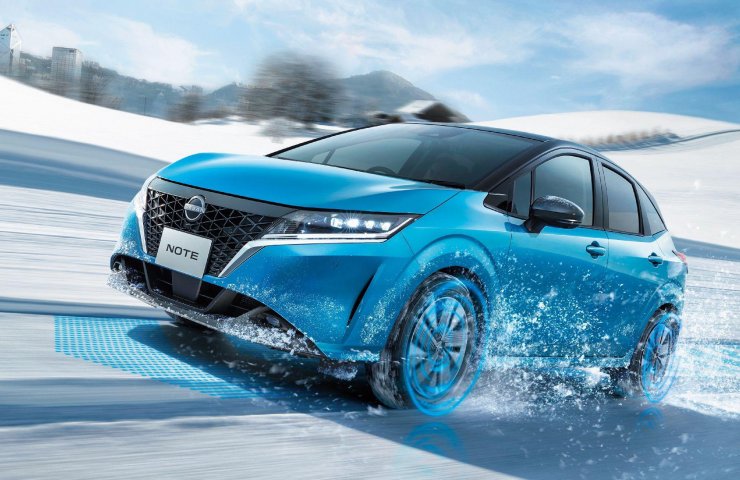 Nissan has introduced an all-wheel drive modification of the new generation Note compact hatchback. So far, such a car will be presented only on the domestic market in Japan.

The Nissan Note AWD is equipped with a hybrid powertrain with a 1.2-liter three-cylinder naturally aspirated gasoline engine, which acts exclusively as a generator to recharge the batteries while driving.

The car is driven by two electric motors: on the front axle with a capacity of 116 liters. from. and 68-strong on the back. The electronics are responsible for optimal distribution of traction by engaging the rear axle when slipping on wet surfaces, snow or ice.

In Japan, the Nissan Leaf AWS will be available at a price of 2.28 million yen, which is equivalent to about 1.61 million rubles at the current exchange rate.

Inside, which has little in common with its predecessor, there is a digital instrument panel, a wireless charging system for smartphones, and a large multimedia display in the form of a tablet.

Recommended:
Washington imposed curfew after Trump supporters seized US Congress building
Installation of a spreader made by Ukrainian NKMZ continues in Uzbekistan
Norwegian company refused to certify Nord Stream 2
On this topic
KAMAZ presented a compact city electric vehicle "KAMA-1"
Employees of the Nissan plant in Barcelona lit candles on their jobs (Video)
Japan called virus crisis "the biggest since the second world war"
Pre-order the new Tesla pickup Cybertruck made about 146 000 customers – Elon Musk
In Nissan have announced falling sales in Europe and Russia by 20%
General Motors and Volkswagen go all-in on electric vehicles
Add a comment
Сomments (0)
News Analytics
YUZHMASH expects the adoption of the new space program of Ukraine in the near22-01-2021, 15:18
Eleven miners still await rescue from exploded gold mine in China22-01-2021, 12:34
Rivne NPP shut down power unit No. 122-01-2021, 12:13
Russia will start producing "green" hydrogen22-01-2021, 10:47
High-speed railway launched in China Beijing-Harbin highway22-01-2021, 10:22
China will overtake the United States to become the world's largest economy in27-12-2020, 12:04
The shortage in the US steel market will last at least until the end of the25-12-2020, 11:36
Steel production in China to surpass one billion tons this year23-12-2020, 10:59
Iron ore prices hit seven-year high and continue to rise15-12-2020, 10:26
Prices for metallurgical raw materials continue to rise in regional markets10-12-2020, 11:32
Sign in with: