Japan threatens to exclude South Korea from the "white list" of countries with minimal trade restrictions, considering these measures "necessary and related to security," accusing this country of supplying materials for the creation of chemical weapons to North Korea. 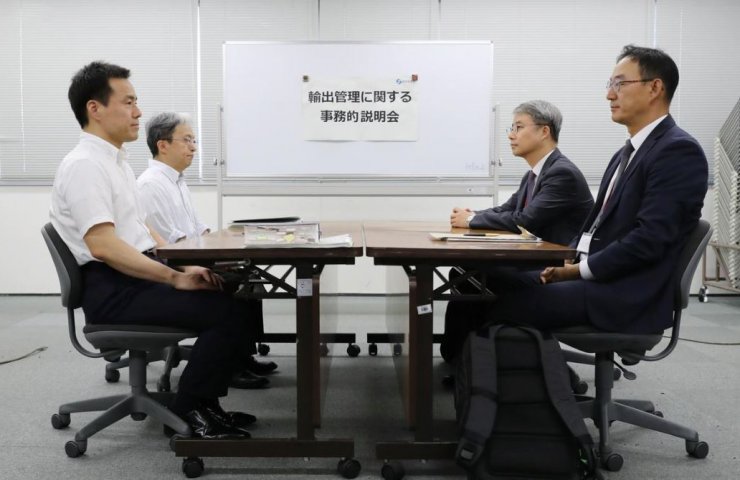 South Korea on Friday called for an international investigation into allegations of Japanese officials that they transferred some high-tech materials imported from Japan to North Korea in violation of UN sanctions.

The call marks a new milestone in a dispute between US military allies that could cut off shipments of chips and displays from South Korean tech giants Samsung Electronics and SK Hynix, which see Apple Inc and other smartphone makers as their customers.

Last week, Japan tightened export restrictions on three materials used in displays and smartphone chips, amid frustration over what it sees as South Korea's inability to act in response to a ruling by one of its courts last October. directing Japanese Nippon Steel Corp. to pay compensation to former forced laborers.

But a Japanese Foreign Ministry spokesman said Friday that restrictions on the export of materials are not a response to claims for compensation for South Koreans being forced to work for Japanese firms during World War II.

When imposing export restrictions, Japanese officials cited “inadequate management” of sensitive goods exported to South Korea, as well as a lack of consultation to share information on export controls.

Complicating matters are Japanese media reports that some of one of the export-restricted materials, hydrogen fluoride, has been shipped to North Korea after being exported south. Hydrogen fluoride can be used in chemical weapons.

“We deeply regret that senior Japanese officials have been making irresponsible comments lately without presenting them with a clear basis, suggesting that our government is violating export controls and not applying sanctions,” Kim said at the briefing. /p>

“To stop unnecessary controversy and determine the factual basis of the Japanese government's claims, we invite a UN Security Council panel of experts or an appropriate international organization to conduct a fair investigation into any four major export control violations by South Korea and Japan,” the official said. /p>

According to Kim, if the investigation reveals any violation by the South Korean government, it will immediately apologize and take corrective action.

But if the investigation concludes that South Korea is not to blame, Japan “should not only apologize to our government, but should immediately lift its retaliatory export restrictions,” Kim said.

Финансовая аналитика, прогнозы цен на сталь, железную руду, уголь и другие сырьевые товары. More news and analytics on Metallurgprom telegram channel - subscribe to get up-to-date market information and price forecasts faster than others.
Сomments
Add a comment
Сomments (0)
On this topic
South Korean President urges Japan to remove restrictions on metal exports
Samsung closes its last facility in China
Japan will tighten rules for the export of high-tech materials to South Korea
The South Korean Prosecutor's office demands to arrest the Vice-President of Samsung Group
Nippon Steel is prepared to further reduce steel production due to coronavirus
Samsung CEO Released from Prison Announces $ 200 Billion Investment in Company Development
Recommended:
ArcelorMittal's profit beat expectations
Serbian steel plant shuts down blast furnace due to high gas prices
Brazil has increased steel exports to Europe by eight times against the backdrop of the war in Ukraine
News Analytics
China reduced steel exports in July by one million tons or 12%08-08-2022, 17:41
World steel prices have moved from a protracted fall to growth08-08-2022, 16:27
Ferrexpo's net profit in the first half of the year decreased by 88%03-08-2022, 10:20
Ukrainian gas transportation system allowed to pump biomethane03-08-2022, 10:18
The strategy for the development of Russian metallurgy will be "quickly02-08-2022, 14:02
The US market may begin a collapse in prices for thick sheet14-07-2022, 09:39
High iron ore shortage could halt metallurgy's green transition28-06-2022, 14:02
Price volatility hits global steel market27-06-2022, 19:28
Recovery in China could be key to rising global steel prices - MEPS24-06-2022, 14:00
Conflict in Ukraine spurs Europe's drive for clean energy03-06-2022, 12:14
Sign in with: