A team of researchers associated with many organizations around the world synthesized carbon AM-III, which is the hardest and most durable amorphous material created to date. 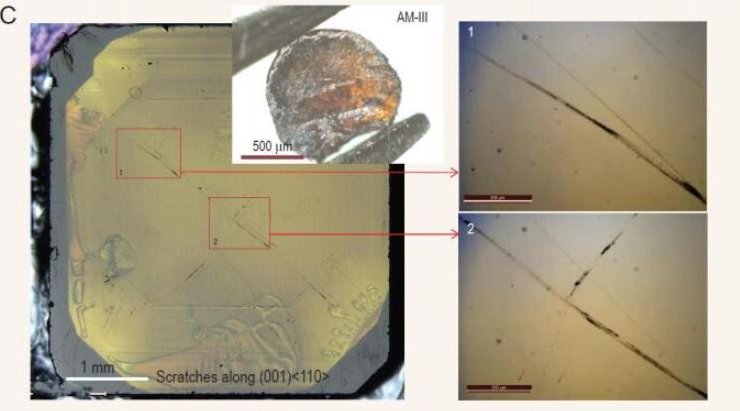 Chinese physicists have announced the successful development of the world's toughest glassy material that can scratch a diamond, according to Yanshan University in Qinhuangdao, Hebei Province.

The novelty, codenamed AM-III, was created by researchers from the above university together with Chinese and foreign colleagues from C60 fullerene under high temperature and pressure conditions. The density of the new material is comparable to that of diamond, and the Vickers hardness reaches 113 GPa.

Glassy state - an amorphous state of a substance, which is formed when a supercooled melt solidifies. AM-III is a transparent semiconductor with a band gap equal to the widely used amorphous hydrogenated silicon a-Si: H. In this regard, the novelty will find wide application in the development of photovoltaic products.

The achievements of Chinese physicists were published on the website of the international edition of the National Science Review.

Recommended:
Imports of steel pipes to the Russian Federation decreased by 11.1% in 7 months
Ukraine sharply increased purchases of liquefied petroleum gas from Russia
Thermal coal on European exchanges has risen to highs since 2008
On this topic
Record floods hit China's largest steel producing region
Laying the Sino-Russian Gas Pipeline on the Yangtze Seabed Challenges Many Global Technical
Chinese space explorers learn how to charge mobile phones with hot water
Panasonic announced plans to increase battery capacity for electric vehicles by 20%
Protective glass for iPhone 11
China's Hebei province decides to expedite the elimination of steel facilities
Partner news
Сomments
Add a comment
Сomments (0)
News Analytics
Free access to data on special permits for the use of subsoil was opened in28-09-2021, 18:27
Zaporozhye iron ore plant modernized crushing and sorting plant28-09-2021, 16:48
The development of industrial parks will allow to completely restart the28-09-2021, 16:19
Ukrainian Foreign Ministry summoned the Hungarian Ambassador over an agreement28-09-2021, 12:43
ArcelorMittal to Build a Billion Euro Waste Blast Furnace in Belgium28-09-2021, 12:16
Oil prices to surpass $ 90 by year end due to shortages - Goldman Sachs27-09-2021, 10:58
Moody's changes its outlook for the mining and metals industry from "positive"14-09-2021, 18:39
European steel prices decline from summer highs and remain stable high04-09-2021, 10:38
Rise in European steel prices to dizzying levels finally fizzled out - Bloomberg27-08-2021, 13:18
Gold continues to be the most efficient portfolio asset - WGC26-08-2021, 12:38
Sign in with: