The head of the British government made a corresponding promise during Svetlana Tikhanovskaya's visit to London - the last stop of the leader of the Belarusian opposition on a diplomatic tour, during which she visited Paris, Berlin and recently in Washington. 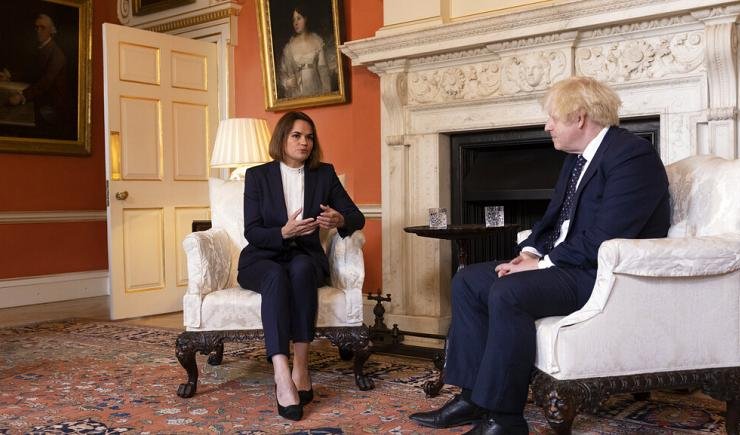 British Prime Minister Boris Johnson has promised to triple financial support for the opposition forces to the regime of Alexander Lukashenko in Belarus. This was reported on the website of the British government following the meeting of the head of the British cabinet with the leader of the Belarusian opposition Svetlana Tikhanovskaya in London.

“The Prime Minister outlined the steps taken by the UK to bring the regime to justice, including the imposition of sanctions against Lukashenka himself. He stressed the UK's commitment to the Belarusian people, in particular by tripling our financial support to Belarusian civil society this year, ”the UK government said in a statement.

Tikhanovskaya commented on the death of the Belarusian activist Vitaly Shishov: “I would say that this is a crime, but I can’t say anything without the results of the investigation. Everyone in Belarus and everyone in exile should take care of their safety, because we see that the regime, if it wants to do something, will stop at nothing to find you. ”

Финансовая аналитика, прогнозы цен на сталь, железную руду, уголь и другие сырьевые товары. More news and analytics on Metallurgprom telegram channel - subscribe to get up-to-date market information and price forecasts faster than others.
Сomments
Add a comment
Сomments (0)
On this topic
UK to complete decarbonization of the energy sector by 2030 - Boris Johnson
After the introduction of Western sanctions against Belarus, its steel exports to Russia grew by 20%
German parliament officially recognizes elections in Belarus as rigged
UK to ban new petrol cars by 2030, hybrids by 2035
British Prime Minister Boris Johnson promised to increase steel purchases at Liberty Steel
Ukraine imposes sanctions against the son of Belarusian President Lukashenko
Recommended:
Turkey in January-July increased imports of pig iron by 46.7%, tripling purchases in Russia
Deere invests billions in self-driving tractors
China ramps up investment in transport to bolster economy
News Analytics
British Steel owner asks government for financial support05-10-2022, 13:05
The price of gold crossed the mark of 1700 dollars05-10-2022, 13:28
US coal prices top $20004-10-2022, 10:16
Tata Steel merger plan to secure long-term profits03-10-2022, 10:46
US hydrogen prices to drop to zero dollars per kg in 5 to 6 years: Platts02-10-2022, 21:53
China production cuts in winter will give limited boost to steel markets -15-09-2022, 10:09
Steel prices may rise as manufacturers stop production11-09-2022, 14:06
IREPAS: The global long products market is in a "dramatic situation"10-09-2022, 20:49
Steel prices are unlikely to rise significantly in the near future - analysts02-09-2022, 22:58
Steel prices may move up on new data from China31-08-2022, 12:19
Sign in with: