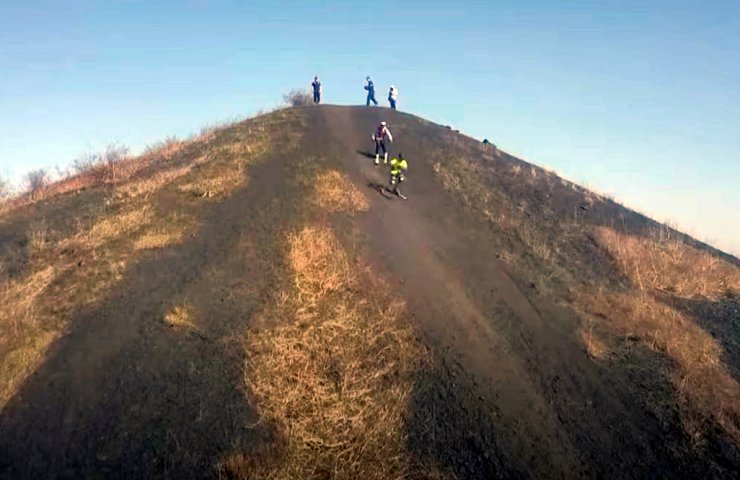 This winter, the coronavirus has confused the plans of skiers across Europe. But the Belgian downhill enthusiasts found a way out of the situation and went to the slopes of the waste heap of a mothballed coal mine near Charleroi.

“We are at an altitude of 266 meters. It is the highest "mountain" in Charleroi. From here you can see many villages. Usually no one notices them. It's really great, ”says skier Victor Sonville.

Descent takes no more than ten seconds. The ascent is more difficult. But the adrenaline rush is provided. Skiers have already equated the track to the "black", increased difficulty.

At the beginning of the 18th century, Charleroi was an important industrial center. Then, three industries began to develop here, which determined the urban economy until the second half of the 20th century - coal mining, steel production and glass production.

After that, the city of Charleroi went through the path that is standard for many monocities with the metallurgical industry of cities. Mass construction of coal mines in the local coal basin, a metallurgical plant, which became one of the enterprises of the largest metallurgical company in the world, Arcelor Mittal. The plant is now owned by its subsidiary Industeel Belgium.

At the beginning of the 2000s, the demand for coal fell sharply, mines began to close massively, and the plant itself significantly reduced its capacity.

Recommended:
Rostec will launch the production of ultra-fast charging stations for electric vehicles
Ministry of Economy of Ukraine and ArcelorMittal Kryvyi Rih signed a Memorandum for a billion dollars
You can now buy Tesla with Bitcoin - Elon Musk
On this topic
Luxembourg sets up European space mining center
European Union scrap collectors worried about possible export restrictions
PAL-V Liberty flying car appeared on European roads
On Saturday, the Germans protested against the construction of girafarig Tesla on the outskirts of
BMW has patented an innovative new technology for recharging electric motorcycles
System locking in Venice fully operational only in 2021
Add a comment
Сomments (0)
News Analytics
Iran is satisfied with the reaction of the world community to 60% enrichment of18-04-2021, 13:24
Gas prices in Ukraine have reached a record value over the past two years -16-04-2021, 17:24
Ukrmetallurgprom asks the Antimonopoly Committee to allow Metinvest to bid for16-04-2021, 17:23
A fatal accident occurred on the territory of the Dnieper Metallurgical Plant16-04-2021, 13:01
Cars built for Euro 2012 will be repaired at the Kryukov Carriage Works16-04-2021, 12:46
World Steel Association predicts a good year for metallurgists15-04-2021, 18:19
World Steel Association defines green steel and its variations12-04-2021, 13:14
China unlikely to cut steel capacity in 2021 due to high steel prices07-04-2021, 12:11
Scrap metal market at the beginning of April02-04-2021, 11:10
Rising Chinese Prices Fueled Rising Global Steel Prices - MEPS25-03-2021, 18:54
Sign in with: