Miners of PJSC "Kryvbaszhelezrudkom" achieved an increase in wages 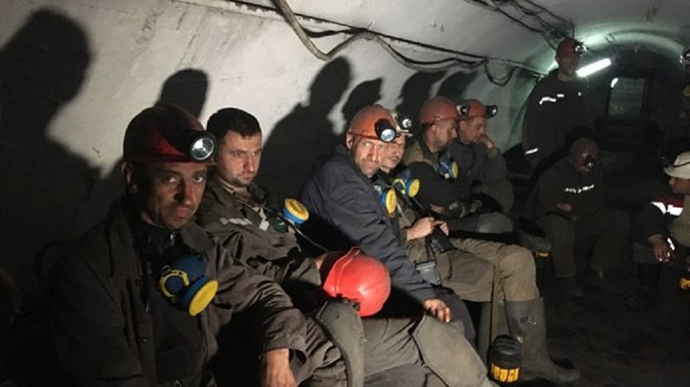 The underground miners of PJSC Kryvbaszhelezrudkom (Kryvyi Rih Iron Ore Plant) have achieved an increase in wages from September 1, 2020.

After negotiations, which lasted from September 4, on the evening of September 10, in the presence of the People's Deputy of Ukraine - Chairman of the Independent Trade Union of Miners of Ukraine Volynets M.Ya., the administration of the enterprise signed a “Memorandum of Understanding and the fulfillment of counter requirements between the administration and employees of PJSC“ Kryvbaszhelezrudkom ” "Aimed at eliminating the causes and consequences of leaving work in underground conditions after the end of the work shift."

In order to fulfill the obligations of the administration in accordance with the Memorandum, order No. 3850 of 09/10/2020 "On the increase in tariff rates and official salaries from 09/01/2020" was immediately issued.

The administration called on all employees of the enterprise, who still remain underground, to stop exposing themselves to danger, rise to the surface and provide an opportunity for the staff of the enterprise to return to a normal work process.

Recall that 84 miners of the Rodina mine remained underground in protest, showing solidarity with the protesters of the Oktyabrskaya mine. General requirements: an increase in wages, improvement of working conditions, the return of preferential length of service according to lists 1, 2, the termination of violations during certification.

Since yesterday, on behalf of the Prime Minister of Ukraine, an unscheduled check by the Main Directorate of the State Labor Service in the Dnipropetrovsk region has begun at PJSC "Kryvbaszhelezrudkom" on compliance with labor legislation for seven years of work.

Recommended:
Rinat Akhmetov's energy holding said there is no incentive for investment
UAH 5 million was transferred to pay salaries to miners at the Nadezhda mine
Ukrainian gas transmission system tested for hydrogen pumping capacity
On this topic
Tomorrow in Kiev is expected protests by miners demanding to dismiss A. Gerus
The energy Ministry promises to resolve the crisis situation at the mine "Krasnolimanskaya"
Rinat Akhmetov's DTEK has launched the underground Wi-Fi connection at a depth of 500 meters
In Luhansk region the miners refused to come to the surface
Miners go to Kiev to protest: will demand a billion hryvnia
The Independent Trade Union of Miners of Ukraine decided to prepare for an all-Ukrainian protest
Add a comment
Сomments (0)
News Analytics
Indian state steel company to sell non-core assets19-09-2020, 18:50
Largest US steel company to lose $ 100 million in Q319-09-2020, 18:50
UN experts believe that the worst-case scenario for the Ukrainian economy can19-09-2020, 18:47
KZhRK miners' strike threatens with loss of sales markets without prospects of16-09-2020, 21:51
Privatization of the alcohol industry has started in Ukraine16-09-2020, 14:56
Iron ore prices to surpass six-year high soon16-09-2020, 10:32
World Oil Demand Peak May Be Over - BP15-09-2020, 09:05
China expands car market capacity by increasing demand for steel and metals11-09-2020, 10:56
Prices continue to rise in the long and flat steel markets08-09-2020, 14:25
Difference between ferrous and non-ferrous metal28-08-2020, 13:45
Sign in with: