Protests at the iron ore mines of PJSC Kryvyi Rih Iron Ore Combine began on September 3, when the miners of the Oktyabrskaya mine refused to go to the surface. 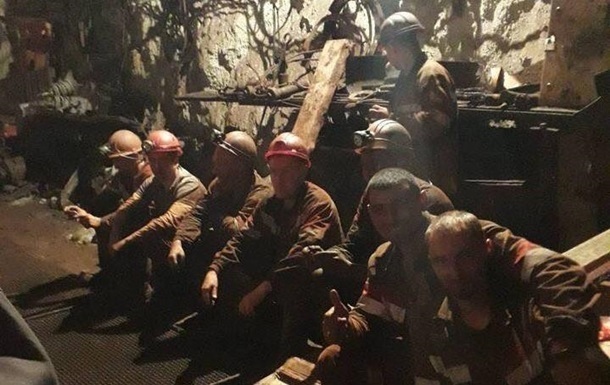 The number of employees of Kryvyi Rih Iron Ore Plant (KZHRK) taking part in the underground protest has increased to 62, said Mikhail Volynets, leader of the Independent Trade Union of Miners of Ukraine (NPGU), on his Facebook page on Monday.

“62 workers of the Oktyabrskaya mines (24 people) and Rodina (38 people) of KZhRK continue their underground protest. The 60 miners, who have been protesting for 26 days, were joined by two signalmen - yesterday, during the third shift, the women refused to rise to the surface, ”Volynets stated.

As reported, on September 3, the miners of the Oktyabrskaya mine of the KZhRK remained underground as part of a protest, later they were joined by workers from other mines of the enterprise.

The requirements of workers are general: an increase in wages, an improvement in working conditions, the return of preferential service according to lists 1, 2, the termination of violations during certification. Administration of KZHRK within the framework of a memorandum of understanding and fulfillment of counterclaims signed with the employees of the enterprise increased from September 1 this year tariff rates and salaries by 10-25%. The protesters are demanding a 30% pay rise.

Operational management of the enterprise is carried out by the Privat group.

Recommended:
A new leader of the metallurgical industry will appear in the USA
Zaporozhtransformer started deliveries of energy efficient autotransformers
Ukraine intends to become the leader of the global titanium industry by 2030
On this topic
KZhRK miners' strike threatens with loss of sales markets without prospects of their return
The head of KZHRK ordered preparations for the conservation of all four mines of the enterprise -
Miners of PJSC "Kryvbaszhelezrudkom" achieved an increase in wages
Relentless degradation of the coal industry. Close Ukrainian mines?
Npgu entered into the national labour conflict with Minamaneho
In Luhansk region the miners refused to come to the surface
Add a comment
Сomments (0)
News Analytics
Innovative matrix headlights on the Audi E-Tron19-10-2020, 22:43
Tensions rise between China and Australia over commodity trade14-10-2020, 18:15
The European Union confirms its intention to introduce a border tax on carbon13-10-2020, 13:20
ArcelorMittal Europe to start producing green steel from 202013-10-2020, 12:44
Kremenchug refinery launched an isomerization unit13-10-2020, 12:43
Dolomite powder market to reach USD 33.44 billion by 202705-10-2020, 12:33
Iron ore prices to surpass six-year high soon16-09-2020, 10:32
World Oil Demand Peak May Be Over - BP15-09-2020, 09:05
China expands car market capacity by increasing demand for steel and metals11-09-2020, 10:56
Prices continue to rise in the long and flat steel markets08-09-2020, 14:25
Sign in with: