Namibia agrees to sell uranium stake in Rio to China

Namibia has no objection to Rio Tinto selling its stake in the uranium mine to China, subject to the country's laws. 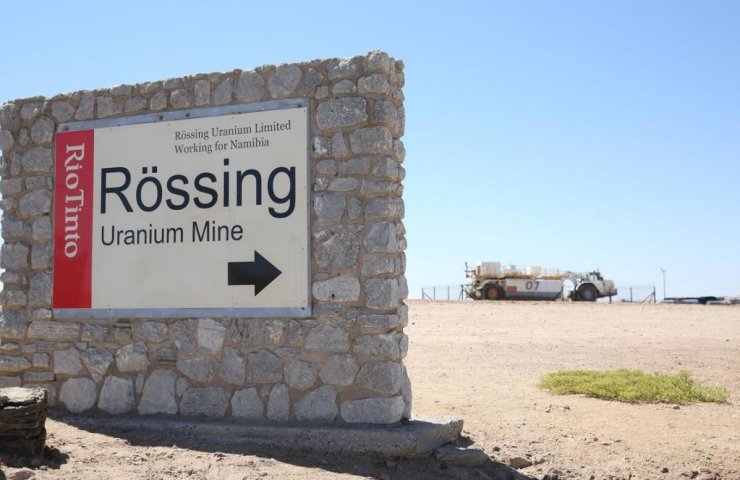 Namibia's Minister of Mines and Energy said he had no objection to Rio Tinto selling its stake in the uranium mine to China, subject to the African country's laws.

Rio, divesting unprofitable assets, said last November that it was selling its 69 percent stake in the world's longest open-ended uranium mine for $ 106.5 million. The completion of the transaction is expected in the first half of 2019.

China already owns a number of assets in the Namibian uranium mining sector, which, along with diamond mining, forms the backbone of the Namibian economy.

Rio Tinto is selling its stake in the Uranium uranium mine to CNUC in a deal subject to approval by the Namibian Tender Committee.

The Government of Namibia owns a 3% stake in Rossing and a majority stake. In addition, an Iranian Foreign Investment Company owns a 15 percent stake, which could scare off potential investors. Other stakeholders are: South Africa Development Corporation (10 percent) and individual shareholders (3 percent).

Recommended:
Saved on fittings: experts put forward another version of the disaster in Miami
Metinvest plans to increase production of iron ore concentrate using computer vision
U.S. Oil Prices Peak Since 2014 Following OPEC + Disagreements
On this topic
Barrick completes acquisition of Acacia Mining
The price bubble in the ore market will soon deflate quickly
ArcelorMittal South Africa faces serious environmental charges
Indian iron ore sales to China plummet
Rio Tinto Capitalization Reaches Record Level Amid Rising Ore Prices
Rio Tinto says Amrun bauxite mine is fully operational
Partner news
Сomments
Add a comment
Сomments (0)
News Analytics
Ukroboronprom confirmed the intentions of Antonov State Enterprise to start25-07-2021, 11:15
Gazprom reacted to the refusal of Naftogaz of Ukraine to buy Russian gas with25-07-2021, 11:00
Iron ore has become a strategically important raw material for defense -24-07-2021, 11:06
Vietnam overtook Ukraine in the world ranking of steel-producing states24-07-2021, 11:38
Port "Yuzhny" has set a record for the speed of loading pig iron on a ship24-07-2021, 10:10
On the regional markets of metallurgical products, prices are balancing in a22-07-2021, 16:22
Demand for armaments will ensure a stable growth of armored steel sales by 4%20-07-2021, 10:10
Protectionist Measures Support European Steel Prices Despite Summer Lull19-07-2021, 11:02
Positive price growth is observed in the markets for metallurgical products16-07-2021, 14:12
European steel market is in confusion: price growth has slowed down, but no one21-06-2021, 17:40