Workers of the only uranium mining enterprise in Ukraine protest

On December 7, due to lack of funds, all divisions of SE "Vostok GOK" are idle, the production process has been stopped. 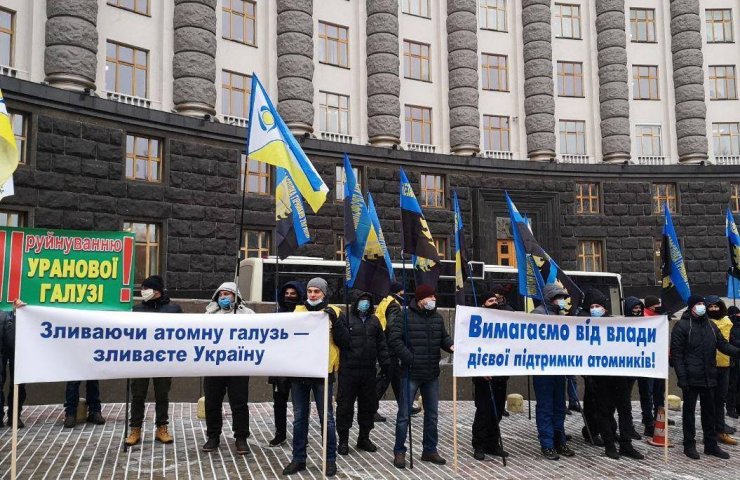 Under the walls of the Cabinet of Ministers of Ukraine, workers of the State Enterprise "Vostochny Ore Mining and Processing Plant" are protesting, who demand to pay off the one and a half month wage arrears and restore the full-fledged work of the enterprise. reports The Independent Trade Union miners of Ukraine (NPGU).

The protesters conveyed their demands to the representatives of the Cabinet of Ministers of Ukraine.

As a reminder, since December 7, due to a lack of funds, all divisions of the SE "Vostok GOK" have been idle, the production process has been stopped.

According to NPGU, this could lead to the bankruptcy of the SE "Vostok GOK" in early 2021 and to the destruction of the country's only enterprise for the extraction of uranium ore and the production of uranium oxide concentrate.

In addition, the NPGU warned that a downtime could lead to an environmental disaster in the region where there are three uranium mines. According to the trade union, the miners have been in conditions of constant salary delays for more than a year.

Alexander Zovva, chairman of the trade union committee of the Novokonstantinovskaya mine at Vostok GOK, said that the plant is officially idle until December 14, but there is no guarantee that work will resume after that.

VostGOK requires an increase in the purchase price of uranium concentrate and support this with an additional agreement with NNEGC.

“The terms of cooperation with NNEGC“ Energoatom ”are very complicated, they cannot be called constructive or friendly. And this affects not only the timely payment of wages, but also the financial condition of the enterprise as a whole ", - declared acting Anton Bendik, General Director of VostGOK State Enterprise.

The two operating uranium mines of the plant are, in terms of their energy equivalent, equivalent to 60 coal mines, in other words, one third of the entire Donbass.

Recommended:
Indonesian gold mine collapse kills 3 people, 5 missing
A program to develop a heavy shock-reconnaissance drone has started in Ukraine
Ukrainian-powered Antares launch vehicle successfully launched from Wallops cosmodrome
On this topic
State Enterprise "VostGOK" will increase the efficiency of uranium production at the
Workers of the only uranium mining enterprise in Ukraine prepare for protests
Eastern GOK reduced production of uranium concentrate by 30%
"VostGOK and Energoatom signed a six-year contract for the supply of uranium concentrate
In Luhansk region the miners refused to come to the surface
Ukraine plans to increase uranium production in 2020
Add a comment
Сomments (0)
News Analytics
US and EU suspend the collection of duties that were imposed against each other05-03-2021, 22:48
Turboatom and Electrotyazhmash discussed prospects for cooperation under05-03-2021, 19:04
DMZ Yaroslavsky in February almost doubled the production of rolled products05-03-2021, 18:19
Sanjeev Gupta Metallurgical Alliance Stops Paying Greensill Loans05-03-2021, 18:18
China to build high standard free trade zone network to reach worldwide - Xinhua05-03-2021, 16:43
Spread between raw materials and high strength alloy steel in Europe increased01-03-2021, 20:21
Increase in prices is forecasted in the markets of steel raw materials -26-02-2021, 09:25
Troy ounce of gold will drop $ 500 in two years - Fitch25-02-2021, 18:29
Global iron ore production growth to outstrip cumulative production in India23-02-2021, 10:22
Fitch Ratings Warns of “Shocking Impact” on Fossil Fuel Exporters18-02-2021, 14:44
Sign in with: