Since December 7, the structural divisions of SE "VostGOK", the 5000th labor collective of the enterprise have been put into downtime due to lack of money. 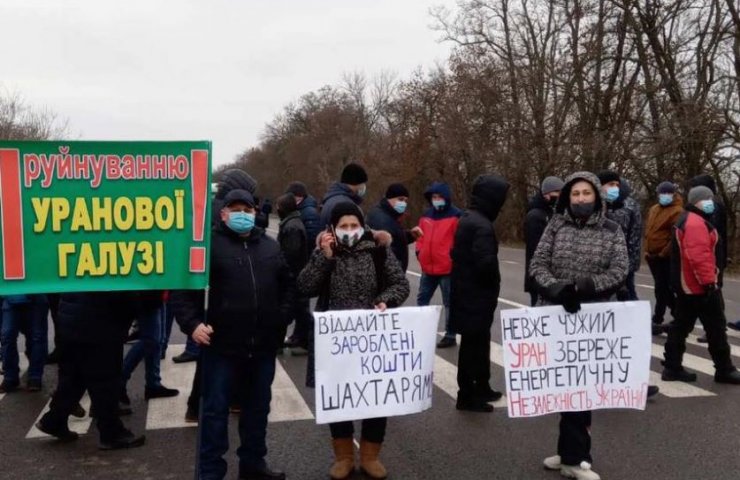 According to the order of the General Director of SE "VostGOK" No. 422 dated December 23, 2020 "On the restoration of the Ingulskaya, Novokonstantinovskaya, Smolinskoye mines of the SE" VostGOK ", mining operations at mines will be restored in the first shift starting from January 4, 2021. The corresponding document published on the company's website in Wednesday.

The labor collective of SE "VostGOK" has suspended the protest action which lasted for three days due to the information about the possible resumption of the work of the enterprise.

As a reminder, in connection with non-payment of wages and stoppage of work at mines, VostGOK employees have been organizing protests in the Kirovograd region since Monday with the support of the Independent Trade Union of Miners of Ukraine (NPGU).

Today, the employees of SE "VostGOK" completely blocked the traffic in the directions of Kiev, Nikolaev, Krivoy Rog, Alexandria. The protest action continued near the town of Smolino.

“For the third day in the cold, with subzero temperatures in the middle of the road, people are fighting for their enterprise, for their jobs, for the life of monocities, which are completely dependent on the stable operation of mines,” said Mikhail Volynets, head of NPGU.

Recommended:
Russia may restrict the export of metal products due to a sharp rise in prices on the domestic market
Russian Magnitka expects high profits and further rise in steel prices
Eleven miners still await rescue from exploded gold mine in China
On this topic
The protest action of the workers of the VostGOK uranium mining mines will continue around the clock
Workers of uranium mines in Ukraine threaten to block four routes on Monday
Workers of the only uranium mining enterprise in Ukraine protest
Relentless degradation of the coal industry. Close Ukrainian mines?
In Kropyvnyts'ke launched a three-day seminar in the framework of the expert mission of the IAEA
In Luhansk region the miners refused to come to the surface
Add a comment
Сomments (0)
News Analytics
In 2021, Ukrzaliznytsia plans to repair more than 300 locomotives for UAH 426-01-2021, 15:30
Ukraine has enough "metals of the future" for the development of innovative26-01-2021, 14:40
High-speed railway line will connect the south of Kazakhstan and the capital of26-01-2021, 14:27
In 2021, an analogue of the US Department of Defense Research Projects Office26-01-2021, 11:24
Turkey plans to produce 100 tons of gold annually26-01-2021, 11:15
China will overtake the United States to become the world's largest economy in27-12-2020, 12:04
The shortage in the US steel market will last at least until the end of the25-12-2020, 11:36
Steel production in China to surpass one billion tons this year23-12-2020, 10:59
Iron ore prices hit seven-year high and continue to rise15-12-2020, 10:26
Prices for metallurgical raw materials continue to rise in regional markets10-12-2020, 11:32
Sign in with: