South Korean Foreign Ministry spokesman Choi Yong-sam said on Tuesday that the government in Seoul is in close contact with colleagues in Tehran and is trying to secure the peaceful release of the sailors and the vessel. 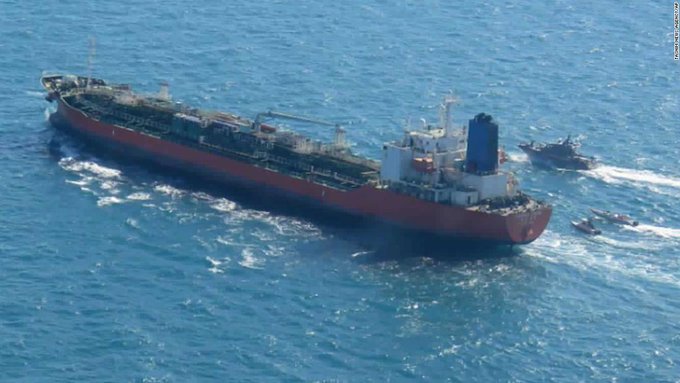 South Korea sent a special anti-piracy unit to the Strait of Hormuz after its tanker loaded with ethyl alcohol on Monday was captured by the naval forces of the Islamic Revolutionary Guard Corps in the Persian Gulf. Iran said the ship was arrested for "environmental and chemical pollution of the Persian Gulf."

According to the South Korean Ministry of Defense, the Cheonghae unit, which includes South Korean special forces, arrived in the strait on Tuesday aboard the destroyer Choi Yong.

Established in 2009 as South Korea's first overseas anti-piracy unit, the Cheonghae unit has been deployed in the Gulf of Aden between Somalia and Yemen to ensure the free movement of South Korean vessels through the region.

Nearly a year ago, the unit's area of ​​operations was expanded to include the Gulf of Oman and the Persian Gulf, approximately 1,800 kilometers (1,118 mi) to the east, due to a sharp rise in regional tensions.

Tensions in the Persian Gulf have escalated last week, on the anniversary of the deadly US strike against senior Iranian General Qasem Soleimani.

According to the South Korean Foreign Ministry, five South Korean citizens are among the 20 civilian sailors on board the tanker.

Recommended:
Worldwide steel market has gone crazy - President of the Polish Stainless Steel Association
Ukrzaliznytsia plans to renovate more than 500 level crossings in 2021
Ukraine will strengthen cooperation with Korea in the field of digitalization of the energy sector
On this topic
Iran's uranium enrichment up to 20% calls into question nuclear deal with Tehran - EU
Iran detains Korean tanker carrying 7,200 tons of ethyl alcohol
USA slapped sanctions on steel industry of Iran
Nevedomaya the largest company on the planet, Saudi Aramco has fallen in price almost on 2%
Japan and South Korea fell out completely
South Korean President urges Japan to remove restrictions on metal exports
Add a comment
Сomments (0)
News Analytics
Georgia's economy shrinks by 11.5% in January26-02-2021, 21:21
Ukraine retained its position in the world ranking of steel producers and rose26-02-2021, 15:52
ArcelorMittal has raised prices for galvanizing for the European market to 90026-02-2021, 13:23
The European Commission initiated a new investigation on steel imports to26-02-2021, 13:22
A rally of workers of the stopped shipyard was held in Mariupol26-02-2021, 12:34
Increase in prices is forecasted in the markets of steel raw materials -26-02-2021, 09:25
Troy ounce of gold will drop $ 500 in two years - Fitch25-02-2021, 18:29
Global iron ore production growth to outstrip cumulative production in India23-02-2021, 10:22
Fitch Ratings Warns of “Shocking Impact” on Fossil Fuel Exporters18-02-2021, 14:44
Raw material prices rise by about 10.5% in January 2021 - Deutsche Industriebank12-02-2021, 10:48
Sign in with: