The most interesting thing in this situation is who exactly will pay the compensation, since Ever Given is owned by a Japanese company, chartered by a Taiwanese company, operated by German operators, sailed with a crew of Indian citizens, and is registered in Panama. 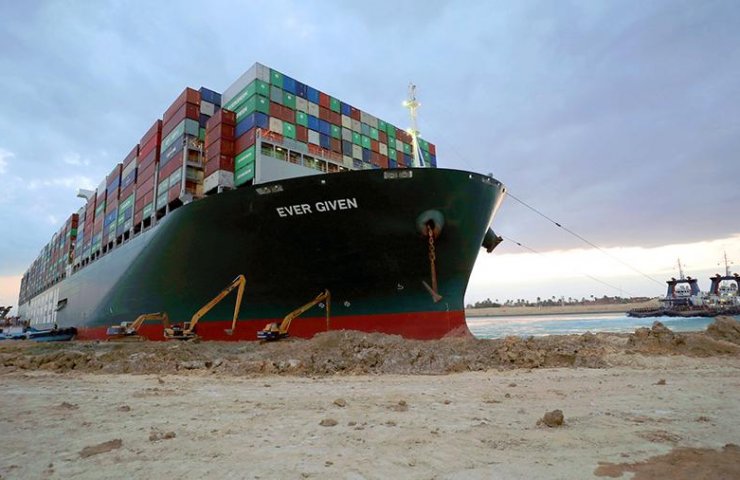 Insurance market experts note that the Suez Canal administration should limit its claims to compensation for the costs of the operation to re-float the container ship Ever Given. Meanwhile, in London, the Japanese owners of Ever Given have filed a lawsuit against the German ship operator.

Egyptian authorities intend to demand compensation for the costs of eliminating the congestion in the Suez Canal, which caused the grounded container ship Ever Given. This was announced by the head of the Suez Canal Administration (SCA) Osama Rabi, CNBC reports.

According to Rabi, the amount of compensation could be more than one billion dollars, based on the loss of revenue of the channel during the suspension of its operation, the cost of equipment and machinery that were used to remove the vessel from the aground, and payment for the work of 800 rescuers who participated in the operation. “We will ask for a decent amount. We saved the ship without any damage or loss, ”Rabi told CNBC. He did not specify exactly who should pay the compensation. The head of the channel's administration noted that he hopes that an agreement on compensation will be reached within two to three days.

“We can agree on some compensation, or the case will go to court,” he said, warning that if the decision on payment is transferred to the court, the container ship, which caused the congestion and is now located north of the canal, will be detained ... Brian Schneider, senior director of insurance at Fitch Ratings, in response to a CNBC inquiry, suggested that the billion dollars is "an estimate of the total losses from this event" and not the amount of "any specific compensation to the authorities of the Suez Canal." He said the insurance industry's losses "would be in the hundreds of millions of dollars, given that the ship was freed in six days." “SCA's claims should be limited to channel damage and rescue operations,” Schneider added.

As noted by CNBC, the congestion in the Suez Canal has brought into focus the opaque nature of relations in shipping: Ever Given is owned by a Japanese company, chartered by a Taiwanese company, operated by German operators, sailed with a crew of Indian citizens, registered in Panama and was in transit through Egypt. Bernhard Schulte, a spokesman for the operator of the vessel, Shipmanagement, told CNBC that all claims will be dealt with separately after an investigation has identified all the causes that led to the incident. Taiwan-based Evergreen said it was not responsible for any delays in the cargo it transported, while the owners of Shoei Kisen told Bloomberg they would discuss compensation with the channel's management, but would refrain from details at this time. The Japanese owners of the container ship have filed a lawsuit against the operator of the vessel in the High Court of London, BusinessInsider writes, citing a lawyer.

The giant 400-meter container ship Ever Given, which ran aground in the narrowest part of the Suez Canal, completely blocked traffic on it on 23 March. It was possible to remove the vessel from the shallows only on the morning of Monday, March 29, after which navigation along the channel was resumed. During the blocking of the channel, more than 450 vessels have accumulated in traffic near it in both directions. The Egyptian authorities said that the backlog in the passage of ships through the canal will be eliminated by Saturday, April 3. Almost a week's downtime will have implications for ports and supply chains around the world.

Финансовая аналитика, прогнозы цен на сталь, железную руду, уголь и другие сырьевые товары. More news and analytics on Metallurgprom telegram channel - subscribe to get up-to-date market information and price forecasts faster than others.
Сomments
Add a comment
Сomments (0)
On this topic
Thyssenkrupp asks the German government for state aid of 5 billion euros
Elon Musk explained the rise in prices for Tesla by the increase in costs for rolled metal and
David Cameron declares his innocence in the problems of Liberty Steel and GFG Alliance
The construction industry in Ukraine is growing faster than other types of economic activity
Lockdown of the Suez Canal will last until at least April 1: it could drive up steel prices
Billionaires stop buying expensive yachts because of fears of a global recession
Recommended:
The United States refused to comply with the decision of the WTO on tariffs on steel and aluminum
Europe's passenger car market records its worst year since the turn of the century
Norwegian startup to build €4bn green steel plant
News Analytics
War in Ukraine to accelerate world economy transition to clean energy - BP30-01-2023, 11:49
ArcelorMittal invests $120m in US green steel company30-01-2023, 11:11
The United States refused to comply with the decision of the WTO on tariffs on29-01-2023, 20:08
China remains the world leader in shipbuilding with a 50% share of new shipyard29-01-2023, 12:35
Prices for metal products in Ukraine increased by 26% last year29-01-2023, 12:06
S&P: Russia will continue to dominate the steel export market in the Black05-01-2023, 11:22
Fitch Analysts Predict Big Drop in Global Steel Consumption This Year14-12-2022, 13:59
Analysts predict 5% annual growth in the iron casting market through 203006-12-2022, 12:44
Commodity prices will fall, metals quotes will rise slightly - Focus Economics28-11-2022, 13:28
Platinum market to face shortage next year - WPIC22-11-2022, 18:25
Sign in with: