Exactly a year ago, Honda also stopped its assembly plants in North America, announcing a sharp drop in demand for cars due to the outbreak of the coronavirus pandemic. Today the reason for the shutdown was the shortage of microcircuits. 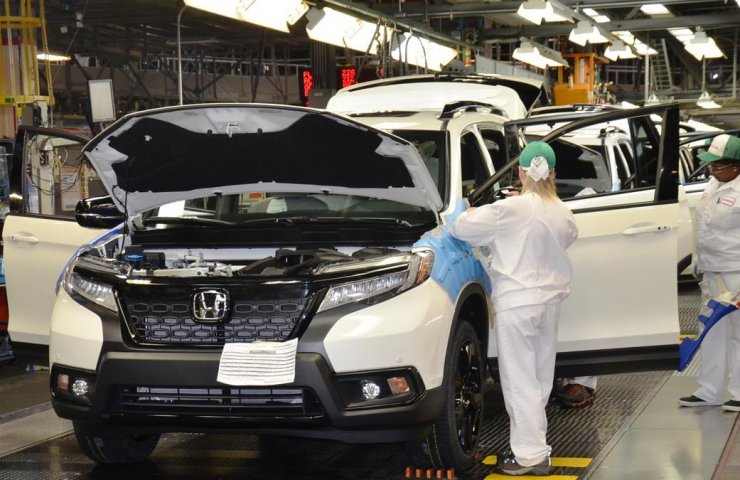 Honda Motor said Tuesday that supply chain problems are forcing it to suspend production at most auto plants in the US and Canada for a week.

The Japanese automaker added that the problem will lead to some production cuts next week at all plants in the US and Canada. The cause is attributed to the impact of COVID-19, congestion in various ports, a lack of microchips and harsh winter weather in the past few weeks.

The company declined to indicate the volume of vehicles affected, but said that “the purchasing and manufacturing teams are working to limit the impact of this situation.”

According to AutoForecast Solutions, Honda typically produces about 30,000 vehicles a week in the US and Canada.

The chip shortage that plagues most of the world's automakers is a confluence of factors as automakers who sharply cut chip purchases last year are now competing with computer and home appliance makers for purchases.

General Motors Co cut production at its U.S. plants and warned it could lose hundreds of millions of dollars in profits this year.

Ford Motor Co previously said the chip shortage could hurt profits in 2021 by up to $ 2.5 billion.

Recommended:
The metallurgical plant of Alexander Yaroslavsky is carrying out the reconstruction of coke oven batteries
Volodymyr Zelenskyy met with Lakshmi Mittal, Chairman of the Board of Directors of ArcelorMittal
The difference in prices for scrap and finished steel in the United States increased over the year from $ 300 to $ 800 per ton
On this topic
Bosch launches automotive chip plant in Dresden
Chip shortage will reduce global car production by 670,000 units in the first quarter
Mazda will cut car production by 7,000 units in February due to chip shortages
Trump's legacy - carmakers shut down factories over Chinese chip shortages
Honda suspends UK production
Los Angeles Times: a Perfect storm in the American market of steel
Add a comment
Сomments (0)
News Analytics
Global hydrogen demand to grow 7-fold by 2070 - PwC21-04-2021, 12:31
Energy independence of Ukraine depends on decarbonization and "green" energy -21-04-2021, 12:42
Shell tests hydrogen fuel cells on ships in Singapore21-04-2021, 11:39
Gazprom will continue to develop priority areas of hydrogen energy based on21-04-2021, 10:49
EU approves targets to reduce greenhouse gas emissions by 55% by 203021-04-2021, 10:36
Global hydrogen demand to grow 7-fold by 2070 - PwC21-04-2021, 12:31
World Steel Association predicts a good year for metallurgists15-04-2021, 18:19
World Steel Association defines green steel and its variations12-04-2021, 13:14
China unlikely to cut steel capacity in 2021 due to high steel prices07-04-2021, 12:11
Scrap metal market at the beginning of April02-04-2021, 11:10
Sign in with: