AFP: In Minsk to protest against the Union with Russia came about 1000 people

According to devoid of registering the human rights centre "Viasna", in the peak moment on the Oktyabrskaya square of Minsk gathered up to 730 people. 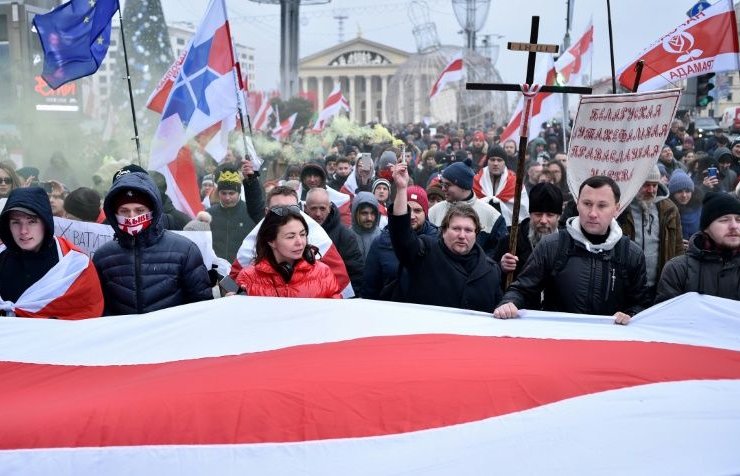 According to the French Agency AFP (AFP< / span>), thousands of Belarusians took part in an unauthorized demonstration on Saturday against the prospect of closer Union with Russia.

According to the press service of the Kremlin, the President of Belarus Alexander Lukashenko met with his Russian counterpart Vladimir Putin in Russia on Saturday to discuss "key issues in our bilateral relations, including prospects of deepening integration."

Indignant a potential deal, the protesters, mostly Belarusian youth, went to the government building in the capital Minsk, saying "this is not integration, it is the occupation" and "the President is selling our country."

Many waved the flags of the EU or the opposition. The police were at the scene and watched the demonstration, but no arrests were made.

Lukashenko, who is often called Europe's last dictator, has repeatedly denied the claims in the creation of closer integration with Moscow.

Not landlocked Belarus, sandwiched between Poland, Ukraine and Russia, is one of the main allies of Russia in Europe, although relations are often strained.

According to the study, the Minsk Academy of Sciences, published this week, only about 49.9% of Belarusians want their country to remain fully independent of Moscow, while supporters of unification with common political institutions, there were 36 per cent and 7.7 per cent want full unification of the two States.

Recommended:
Metinvest has taken out a loan to Finance the oxygen complex on the boiler. Ilyich
Bulgaria offers transit liquefied natural gas from Greece to Ukraine
January 1, Chicagoans lined up many kilometers of queue for legalized marijuana
On this topic
German police unlocked the coal mines in the East
Dubai police became one of customers for the new pickups Tesla Cybertruck
Ukraine is interested in import of electricity from Belarus Alexey Orzhel
The supply of electricity from Russia to Ukraine will be increased to market sources
В британском Эссексе нашли грузовик с 39 трупами, подозреваемый в массовом убийстве арестован
Правительство Украины анонсировало «децентрализацию евроинтеграции»
Add a comment
Сomments (0)
News Analytics
The steel market has bottomed out, said Metinvest CEO20-01-2020, 18:23
Ukraine reported the first case of highly pathogenic avian influenza for three20-01-2020, 18:47
Uz and Chinese CRCC has signed a Memorandum of understanding20-01-2020, 16:03
Greece has sent to Ukraine two tankers with diesel fuel20-01-2020, 16:59
Zaporizhstal orders for the four months ahead – CEO20-01-2020, 15:57
Finnish scientists have learned to make food from water and air20-01-2020, 13:26
Iran has denied reports of sending black boxes of the crashed in Tehran Boeing19-01-2020, 13:57
The suspension of oil production in Libya has caused extreme concern to the UN.18-01-2020, 21:32
The IMF predicts the decline of the world economy into crisis since the great18-01-2020, 16:38
In the Balearic Islands in Spain were forbidden to get drunk and jump off18-01-2020, 13:28