Submerged plant NLMK-Ural will resume no earlier than 10 days

July 20, late in the evening due to heavy rains and increasing water level in rivers in Nizhniye Sergi there was a flooding of the territory of the rolling production of NLMK-Ural. 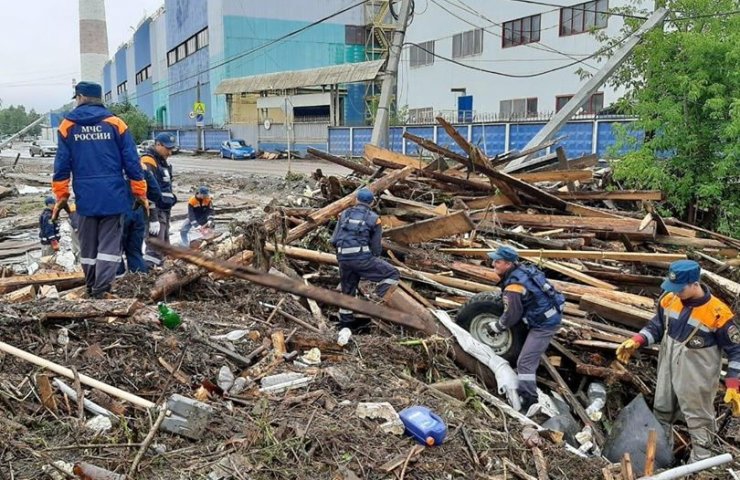 Novolipetsk steel (NLMK) has suspended production at the site of NLMK-Ural, which is situated in Nizhniye Sergi. Information about this is available on the website of the company.

"the company was promptly disconnected Elektro - and gas supply, shut down the equipment. Evacuated employees, no one was hurt. Are currently under emergency repair work, is the clearing of land. To estimate the time before launch will be later", — stated in the message of the company.

However, the Interfax said that received a rating of timing of the resumption of work from the press-office of NLMK-Ural, which, after flooding will be able to resume production in ten days, at the end of July.

In Nizhniye Sergi is NLMK's rolling mill capacity of about 1 million tons of steel a year.

NLMK-Ural is the base enterprise of the division "rolled steel in Russia" NLMK group and specializiruetsya in the production of continuous cast square billets, reinforcement bars and coils, wire rod. The production sites of "NLMK Ural" located in the cities of Revda (EAF production), Nizhniye Sergi and Berezovsky (section manufacturing). Rolling capacity is about 2 million tons of steel.

Recommended:
PJSC "Dneprovsky Metallurgical Plant" allocated 38 million hryvnia for environmental activities
US pledges to halve emissions by 2030 as part of renewed fight against global warming
Dmitry Firtash regained the right to purchase a 51% stake in the Zaporozhye Titanium and Magnesium Plant
On this topic
In Russia flooded the shop of the Ural division of the Novolipetsk metallurgical combine
Yuzhmash told whether it is possible to launch reusable rockets from the Black Sea
Donbasenergo alleges blackmail on the part of Donetskoblgaz and the possible collapse of the
How the reform of the electricity market in Ukraine can lead to a collapse and what to do about it
South Korea's Hyundai Motor resumed production after a partial lifting of the quarantine in China
Who will freeze first, if Ukraine will stop the transit of Russian gas?
Add a comment
Сomments (0)
News Analytics
Rinat Akhmetov's engineering company Corum Group sent a delegation to India05-05-2021, 21:09
A mining and metallurgical complex will be created in the Bayan-Undur somon of05-05-2021, 19:39
In Ukraine, European requirements for the ecodesign of solid fuel boilers will05-05-2021, 15:30
April steel production of "Zaporizhstal" increased in annual comparison by05-05-2021, 15:27
Germany plans to achieve carbon neutral economy by 204505-05-2021, 12:28
The current state of the market is ideal for the sale of rolled steel - IREPAS04-05-2021, 18:41
Global hydrogen demand to grow 7-fold by 2070 - PwC21-04-2021, 12:31
World Steel Association predicts a good year for metallurgists15-04-2021, 18:19
World Steel Association defines green steel and its variations12-04-2021, 13:14
China unlikely to cut steel capacity in 2021 due to high steel prices07-04-2021, 12:11
Sign in with: