A vessel worth at least $ 300 million will be included in the five largest yachts of the richest Russians. 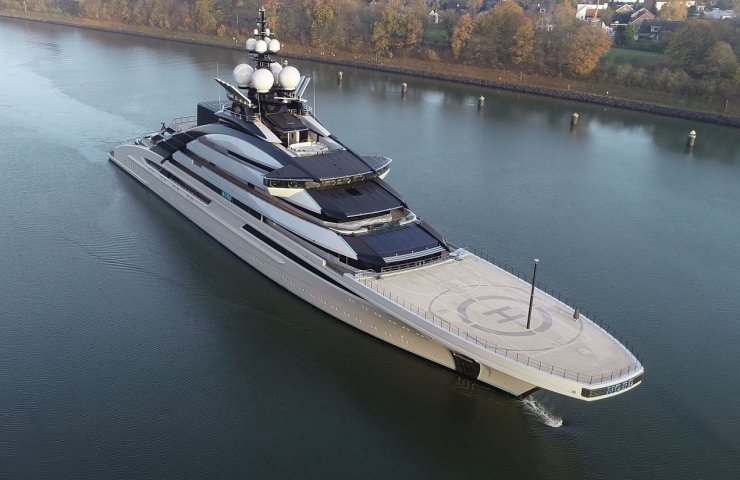 The 142-meter yacht Nord, built at the German shipyard Lürssen, will be handed over to the owner in the first quarter of 2021, Lürssen told Forbes. The ship belongs to the owner of Severstal, Alexei Mordashov, two sources in the yacht market told Forbes. Lürssen declined to comment on the owner's information.

Nord is ready to receive up to 36 guests in 20 cabins, it has six decks, one of which is technical. Features include a large swimming pool, jacuzzi on the sun terrace, spa, diving center, cinema, beach area, BBQ area, tender garage and two helipads. The ship's design was developed by the world famous Venetian studio Nuvolari & Lenard, for which this project was the third joint with Lürssen. The other two are the 86m Quatroelle (2013) and the Testarossa (2022, 116m) under construction. The boat will be serviced by a team of more than 40 people.

The yacht's displacement hull is made of steel and the superstructure is made of aluminum. The hybrid engine allows a maximum speed of 20 knots and a cruising speed of 15 knots.

The vessel has become the largest vessel launched this year, according to Boat International Media, and one of the largest in the world: it will be ranked 10th after the A + yacht of the Abu Dhabi royal family. If we talk about the largest boats of Russians, then in this list it will take the fourth place - after Eclipse by Roman Abramovich, Dilbar Alisher Usmanov and Sailing Yacht by Andrey Melnichenko.

A source close to the businessman Forbes clarified that the businessman does not plan to part with the previous boat - built in 2013, the 63-meter Lady M - Mordashov has seven children, including two adult sons from his second marriage, Kirill and Nikita, who he has already transferred some of his assets.

According to Boat International Media, there is a surge in demand for superyachts over 100 meters in length to explore some of the world's most inhospitable corners.

Research published by the magazine shows that 23 private yachts at least 100 meters in length are under construction. This is more than 21 yachts last year and 18 vessels of this class two years ago. The growth is driven by demand for "exploration yachts" designed to sail in extreme conditions, such as the Arctic Circle or the South Pacific, according to industry experts.

Recommended:
Miners of the Raspadskaya mine have produced more than 5 million tons of coal since the beginning of 2020
In 2020, Ukraine received 22 container trains from China
China and Ukraine to hold intergovernmental meeting on December 23
On this topic
Akademik Chersky arrives at the Nord Stream 2 pipe-laying site
Prospects for ship repair in Ukraine
South Korean DSME to build six LNG carriers for Arctic LNG 2
Yuzhmash told whether it is possible to launch reusable rockets from the Black Sea
Florida showed the yacht is constructed from stainless steel
Steel Musel is crucial in the production of champagne
Add a comment
Сomments (0)
News Analytics
Interpipe Steel: green metallurgy in Ukraine turns 9 years old18-01-2021, 15:28
Ukrmetallurgprom clarifies data on iron and steel smelting in Ukraine for 202018-01-2021, 12:50
At least 12 living miners remain under the rubble of a mine blown up on January18-01-2021, 11:47
In the Republic of Tuva, a citizen of China died as a result of a collapse in a17-01-2021, 11:44
Lenovo remains the global leader in personal computer shipments in 202017-01-2021, 08:19
China will overtake the United States to become the world's largest economy in27-12-2020, 12:04
The shortage in the US steel market will last at least until the end of the25-12-2020, 11:36
Steel production in China to surpass one billion tons this year23-12-2020, 10:59
Iron ore prices hit seven-year high and continue to rise15-12-2020, 10:26
Prices for metallurgical raw materials continue to rise in regional markets10-12-2020, 11:32
Sign in with: