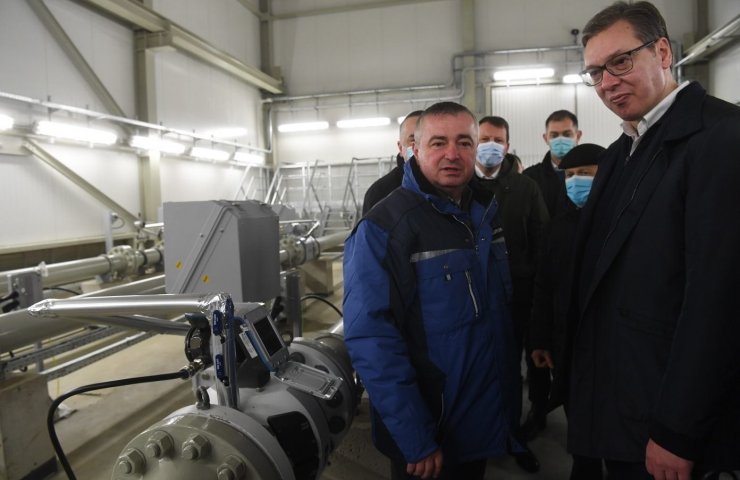 Today Gazprom began supplying gas to Serbia, as well as to Bosnia and Herzegovina via a new route - through the territories of Turkey and Bulgaria.

Gas from Russia is transported via the Turkish Stream offshore gas pipeline and further through Turkey. Then it goes to Serbia via the national gas transportation system of Bulgaria. Here gas is distributed and supplied to consumers in Serbia and Bosnia and Herzegovina.

Deliveries along this route became possible thanks to the expansion and commissioning of new gas transmission capacities by Bulgartransgaz EAD in Bulgaria and GASTRANS d.o.o. Novi Sad in Serbia.

Turkish Stream is a modern, efficient and reliable gas pipeline demanded by European consumers. The number of European countries that receive Russian gas with the help of the Turkish Stream has grown to six. Now, along with Bulgaria, Greece, North Macedonia and Romania, Serbia, Bosnia and Herzegovina have provided themselves with such an opportunity, ”said Alexey Miller, Chairman of the Gazprom Management Committee.

The gas pipeline launch ceremony took place on the morning of January 1. It was attended by President of Serbia Aleksandr Vucic, Russian Ambassador to Serbia Aleksandr Botan-Kharchenko, General Director of Serbiyagaz Dusan Bayatovic, as well as representatives of Russian companies that built the gas pipeline.

According to Mr. Vucic, Serbia can save more than $ 70 per 1,000 cubic meters of gas on this. “Serbia has become much richer after the gas was connected. The price for 1 thousand cubic meters will be $ 155 at the entrance from Bulgaria, plus from $ 12 to $ 14 transportation costs in our network, previously it was $ 240, "the head of state said.

Balkan Stream continues the Turkish Stream gas pipeline, which runs along the bottom of the Black Sea from Russia to Turkey. From there, gas is exported to Greece, Bulgaria and North Macedonia. The Serbian authorities planned to launch the Balkan Stream in November, but the commissioning was postponed. Previously, gas to Serbia from Russia was supplied through Ukraine and Hungary.

Recommended:
Hot rolled sheet prices in the US topped $ 1,000 per ton for the first time in history
Trump vetoed US defense budget with sanctions against Nord Stream 2
Panic over a new strain of coronavirus could finally ditch the European aviation industry
On this topic
Bulgaria offers transit liquefied natural gas from Greece to Ukraine
Ukraine will buy Russian gas from Romania at the "Turkish stream"
Who will freeze first, if Ukraine will stop the transit of Russian gas?
Bulgaria will start the transit of Russian gas to the EU via the Turkish stream with the beginning
The Turkish President announced the start of gas transit through Nord stream on 8 January
Russia plans to begin deliveries of gas on "to Northern stream-2" before the New year
Add a comment
Сomments (0)
News Analytics
Auto giants FAW and Audi launch joint EV project in China19-01-2021, 11:14
Germany suspended construction permit for Nord Stream 219-01-2021, 11:57
Interpipe Steel: green metallurgy in Ukraine turns 9 years old18-01-2021, 15:28
Ukrmetallurgprom clarifies data on iron and steel smelting in Ukraine for 202018-01-2021, 12:50
At least 12 living miners remain under the rubble of a mine blown up on January18-01-2021, 11:47
China will overtake the United States to become the world's largest economy in27-12-2020, 12:04
The shortage in the US steel market will last at least until the end of the25-12-2020, 11:36
Steel production in China to surpass one billion tons this year23-12-2020, 10:59
Iron ore prices hit seven-year high and continue to rise15-12-2020, 10:26
Prices for metallurgical raw materials continue to rise in regional markets10-12-2020, 11:32
Sign in with: