Earlier it was reported that "Gazprom" filled gas both offshore section of the gas pipeline "Turkish stream" and completes commissioning. 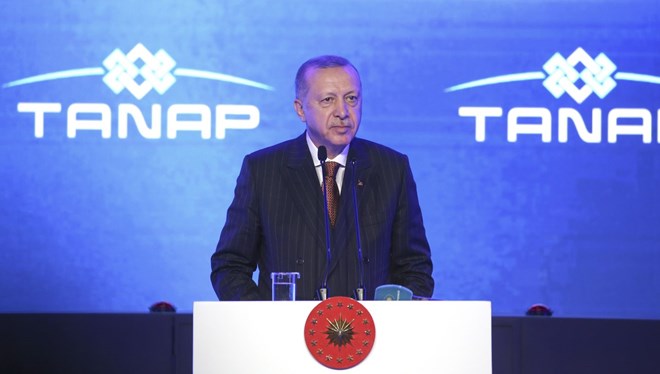 Turkish President Tayyip Erdogan said on Saturday that commissioning of the gas pipeline "Turkish stream" is scheduled for January 8. About this Turkish leader said during the launching ceremony of the TANAP pipeline, through which Azerbaijani gas will come to Turkey and Europe, in Edirne on the border with Greece. Broadcast of the event led to Turkish TV channel NTV.

"of Course, we have another very important step that we do. On 8 January in Istanbul we start the gas pipeline called Turkish stream," said Erdogan.

In the ceremony of launch of TANAP gas pipeline was attended by President of Azerbaijan Ilham Aliyev.

"Today is a historic day ... This is an international cooperation project, which is now the southern corridor gas essentially 7 countries combined.

Erdogan said that the project of TANAP construction a symbol of the historic friendship between Ankara and Baku.

"the TANAP Project is first and foremost a symbol of the historical friendship between Turkey and Azerbaijan. This is a regional project aimed at strengthening peace in the region," he said.

"Turkish stream" — a new export gas pipeline from Russia to Turkey through the Black sea. The first string of the gas pipeline is designed to supply gas to Turkish consumers, the other for the gas supply countries in southern and South-Eastern Europe. The capacity of the first and second strings of the "Turkish stream" will be at 15.75 billion cubic meters each.

Recommended:
China promises to continue the program to reduce outdated steel production capacity and coal
Iron ore prices in China are preparing to drop below $ 100 per ton
Jewelry will rise by a third because of rising gold prices
On this topic
The head of the Ukrainian chamber of Commerce announced that China became a leader of the open
A new lawsuit for "Gazprom": what does "Naftogaz" in the Stockholm arbitration?
Today in Ukraine, gas prices for industry increase by 20%
Отопительный сезон в Украине: где могут быть проблемы с теплом и почему
Молдова подготовилась к остановке транзита газа через Украину
Газ как оружие гибридной войны России: как с этим бороться?
Add a comment
Сomments (0)
News Analytics
ArcelorMittal Kryvyi Rih is building a new blade with strict observance of08-07-2020, 19:29
Strategy of defense in space07-07-2020, 10:49
AVTOVAZ predicts the fall of the Russian car market by 20-25%06-07-2020, 16:52
Novokramatorsky Mashinostroitelny Zavod re-entered the market of coke chemical06-07-2020, 16:50
DMK exceeded the plan of sales in June, shipping of metal less than a year ago06-07-2020, 16:35
Steel prices in southern Europe are rising, despite weak demand23-06-2020, 10:54
Analysts expect strong demand growth for steel in China10-06-2020, 11:57
Global steel consumption in 2020 will be reduced by 6.4% - Worldsteel04-06-2020, 13:53
American steelmakers are faced with an unexpected problem associated with the14-05-2020, 09:09
Relying on the incentives, Chinese steelmakers increase production30-04-2020, 10:20
Sign in with: