The explosion on the Urengoy-Pomary-Uzhgorod gas pipeline is being investigated, among other things, as a possible sabotage aimed at undermining Ukraine's status as a reliable transit country for Russian gas to Europe. 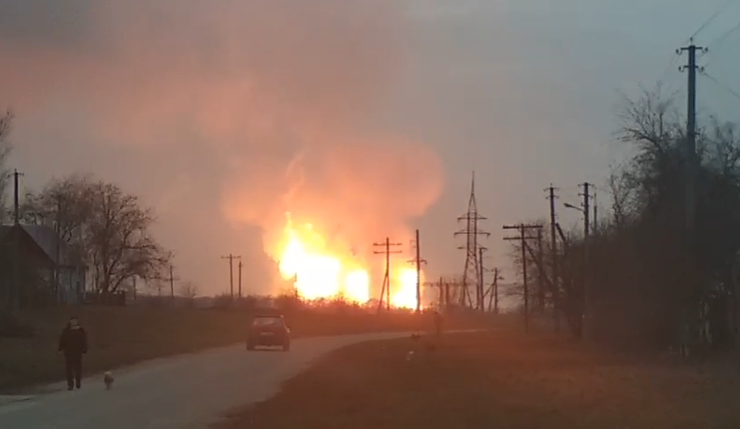 The Ministry of Energy of Ukraine will investigate the causes of the explosion that occurred today on the Urengoy-Pomary-Uzhgorod gas pipeline near Luben in the Poltava region, and also propose measures that would minimize the risk of such situations in the future.

The press service of the Ministry of Energy noted that, according to the information received, there are no threats to the transit of Russian gas to Europe and Ukraine, thus, retains the status of a reliable gas transit country.

On January 9, 2021 at 15:50, according to operational information, the Urengoy-Pomary-Uzhgorod gas pipeline was depressurized in the Poltava region near the city of Lubny. There were no casualties or injuries in the accident.

Repair crews work at the scene of the incident while the accident is localized. There is no danger for residents of neighboring settlements.

The Ukrainian gas transportation system operator is taking action in accordance with the Emergency Localization and Elimination Plan (PLAS) and has already reported the incident to the National Police, DSSN, SBU. An investigation will establish the likely causes of the emergency, including the possibility of sabotage or attempted illegal tapping.

Recommended:
ArcelorMittal increases prices for coiled steel again in the EU and immediately by 30 euros per ton
Interpipe reduced sales of pipe and railway products in 2020
Ferrari's first crossover to begin production in 2022
On this topic
The European Union has opposed the adoption of Ukraine's law on localization of production
Yuzhmash told whether it is possible to launch reusable rockets from the Black Sea
How the reform of the electricity market in Ukraine can lead to a collapse and what to do about it
The transit of Russian gas through Ukraine will continue on terms acceptable to all parties –
Ukraine has announced new tariffs for the transit of Russian gas to Europe
Investigation results: The crash of the Boeing 737 Max Lion Air was caused by a combination of 9
Add a comment
Сomments (0)
News Analytics
YUZHMASH expects the adoption of the new space program of Ukraine in the near22-01-2021, 15:18
Eleven miners still await rescue from exploded gold mine in China22-01-2021, 12:34
Rivne NPP shut down power unit No. 122-01-2021, 12:13
Russia will start producing "green" hydrogen22-01-2021, 10:47
High-speed railway launched in China Beijing-Harbin highway22-01-2021, 10:22
China will overtake the United States to become the world's largest economy in27-12-2020, 12:04
The shortage in the US steel market will last at least until the end of the25-12-2020, 11:36
Steel production in China to surpass one billion tons this year23-12-2020, 10:59
Iron ore prices hit seven-year high and continue to rise15-12-2020, 10:26
Prices for metallurgical raw materials continue to rise in regional markets10-12-2020, 11:32
Sign in with: