Andrzej Duda believes that the new EU sanctions should be directed against Gazprom, and this will force the Kremlin to "respect international law and human rights." 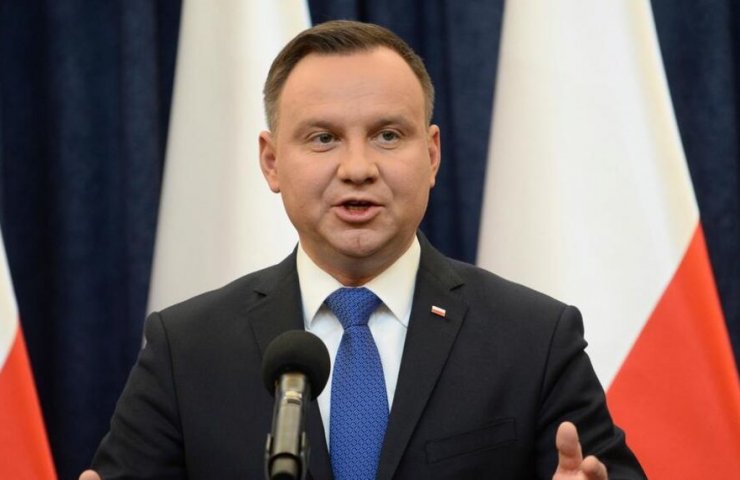 Polish President Andrzej Duda has called on the EU to strengthen sanctions against Russia after the arrest and imprisonment of Alexei Navalny, an anti-corruption fighter who has become the most famous critic of Russian President Vladimir Putin.

“The only way to do without rifles, guns and bombs is through sanctions. So we are ready to help reach a consensus on this issue, "Duda said.

According to the President of Poland, the new package of sanctions should be directed against Gazprom.

“I think that if we limit the possibility of Gazprom's economic functioning in the EU, then such things as respect for international law, human rights and political rights in Russia will begin to move forward, because this will be a serious step in the field economic interests of Russia, "he said.

EU foreign ministers will discuss the issue of introducing additional sanctions against Russia on Monday.

While some EU countries, especially the three Baltic states, share Poland's belligerent stance, there are deep differences within the bloc over policy toward the Kremlin. However, the crackdown on protestors against Navalny's arrest on Saturday raised the stakes of the hawks in the talks of the foreign ministers on Monday.

Recommended:
The cost of electricity in Russia peaks in five years
Elon Musk's Berlin plant will receive a billion dollars in subsidies from the German government
Export of agricultural machinery from Russia increased by 30% in 2020 - Rosspetsmash
On this topic
German politicians increased pressure on Merkel demanding sanctions against the Nord Stream 2 gas
Yuzhmash told whether it is possible to launch reusable rockets from the Black Sea
Stopped nuclear power plants and mines. What's going on in the energy sector of Ukraine?
FT: the US Treasury Deripaska is suspected of laundering money for Putin
Russian police have detained opposition leader Alexei Navalny
A new lawsuit for "Gazprom": what does "Naftogaz" in the Stockholm arbitration?
Add a comment
Сomments (0)
News Analytics
Britain denies loan guarantees for metallurgical holding GFG Alliance01-03-2021, 22:52
Spread between raw materials and high strength alloy steel in Europe increased01-03-2021, 20:21
Metinvest will not announce plans to achieve carbon neutrality yet01-03-2021, 16:19
Zaporizhstal: production results in February 202101-03-2021, 15:24
The largest Texas energy company files for bankruptcy01-03-2021, 12:31
Spread between raw materials and high strength alloy steel in Europe increased01-03-2021, 20:21
Increase in prices is forecasted in the markets of steel raw materials -26-02-2021, 09:25
Troy ounce of gold will drop $ 500 in two years - Fitch25-02-2021, 18:29
Global iron ore production growth to outstrip cumulative production in India23-02-2021, 10:22
Fitch Ratings Warns of “Shocking Impact” on Fossil Fuel Exporters18-02-2021, 14:44
Sign in with: