Russian pipelayer Fortuna resumed construction of a gas pipeline in Danish waters on February 6, the same place where US sanctions stopped it one year and two and a half months ago. 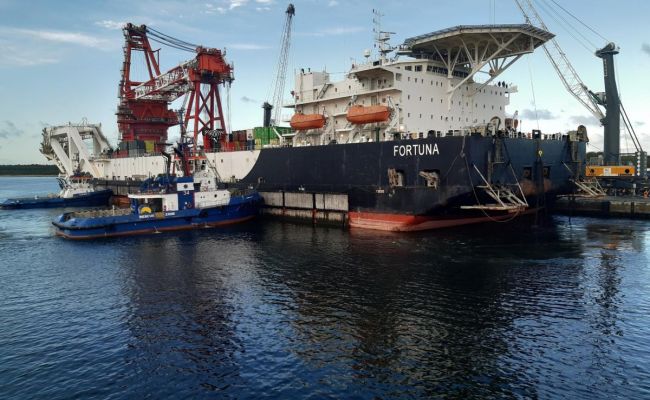 The construction of two strings of the Nord Stream 2 gas pipeline in the exclusive economic zone of Denmark is scheduled to be completed by the end of April 2021, according to an updated notification from the construction operator Nord Stream 2 AG on the portal of the Danish Maritime Agency.

Earlier on the timing of the construction it was reported that it should begin on January 15, 2021, and the completion date was not specified.

Nord Stream 2 AG did not comment further on the published message.

However, on the morning of February 7, the pipelayer stopped due to worsening weather conditions in the Baltic.

Recommended:
Interpipe has completed the shipment of over 1,000 tons of UPJ-F premium connections
Electricity tariff for Ukrainians extended at UAH 1.68 per kWh for one more month
Rolls-Royce buys metal products from Liberty Steel on a prepaid basis and with a large stock
On this topic
Construction of Nord Stream 2 in Danish waters to begin on January 15 - DEA
Gazprom to continue building Nord Stream 2 in Danish territorial waters from 15 January
Construction of "Nord Stream-2 " resumed
Akademik Chersky arrives at the Nord Stream 2 pipe-laying site
Nord Stream 2 will complete construction of the Russian ship Akademik Chersky - German regulator
All vessels involved in the construction of Nord Stream-2 returned to the port of Kaliningrad
Add a comment
Сomments (0)
News Analytics
Iran is satisfied with the reaction of the world community to 60% enrichment of18-04-2021, 13:24
Gas prices in Ukraine have reached a record value over the past two years -16-04-2021, 17:24
Ukrmetallurgprom asks the Antimonopoly Committee to allow Metinvest to bid for16-04-2021, 17:23
A fatal accident occurred on the territory of the Dnieper Metallurgical Plant16-04-2021, 13:01
Cars built for Euro 2012 will be repaired at the Kryukov Carriage Works16-04-2021, 12:46
World Steel Association predicts a good year for metallurgists15-04-2021, 18:19
World Steel Association defines green steel and its variations12-04-2021, 13:14
China unlikely to cut steel capacity in 2021 due to high steel prices07-04-2021, 12:11
Scrap metal market at the beginning of April02-04-2021, 11:10
Rising Chinese Prices Fueled Rising Global Steel Prices - MEPS25-03-2021, 18:54
Sign in with: