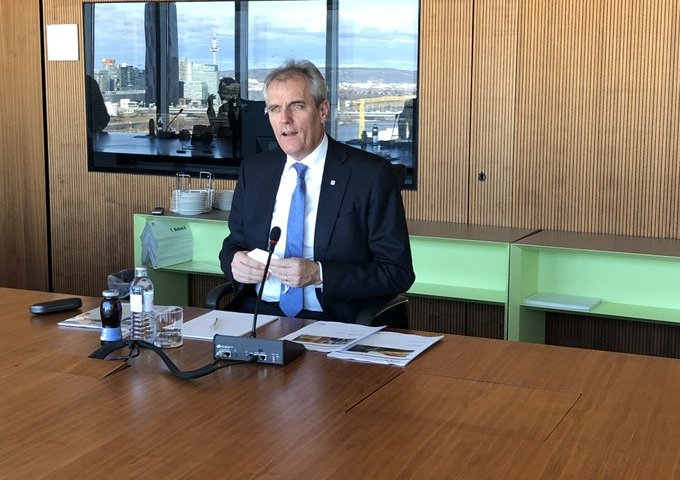 Austrian integrated oil and gas company OMV is the latest financial partner of Gazprom in the Nord Stream 2 pipeline project, which stopped payments due to concerns about US sanctions.

OMV today announced that as of December 31, 2020, there were no financial commitments for the Nord Stream 2 project, despite payments totaling only 729.3 million euros. The loan amount was € 953 million with funding commitments at 31 December 2019 of € 238 million.

OMV strives to fully comply with all US regulations to avoid sanctions. In particular, the company announced that it regularly assesses risks as a result of political and regulatory events inside and outside Europe with a potentially adverse impact on Nord Stream 2 and on OMV's operations in Russia, where it has a stake in gas assets.

OMV is one of five lenders, along with Shell, German utility Uniper, oil and gas company Wintershall Dea and French energy company Engie, which collectively have pledged to provide long-term financing for half the cost of the Nord Stream 2 project.

If all financing partners stop payments at the same stage, this could force Gazprom to seek an additional 1.1 billion euros for the project. The company's volumes and expectations for sales to Europe, excluding the Baltics and Turkey in 2021, suggest that it expects revenue in the market segment of € 31.1 billion.

Earlier this week, the chairman of the board of the Austrian oil and gas concern OMV Rainer Seele said that he expects the Nord Stream 2 gas pipeline to be completed, despite the threat of US sanctions.

“This project is of great importance for the security of supply of the European gas market, so the responsibility for making decisions lies with Europe,” Seele said. “For decades, we have had a deep transatlantic friendship with the United States. And friends should not threaten each other. ”

Recommended:
Electrotyazhmash announced the end of the crisis period and the beginning of recuperation
Emergency summit on chip shortage to be held in Washington - Biden administration
Half of the new DMZ employees came to the plant under the action "Bring a friend - get a bonus"
On this topic
Joe Biden's administration intends to block the Nord Stream 2 project with new sanctions
Akademik Chersky arrives at the Nord Stream 2 pipe-laying site
All vessels involved in the construction of Nord Stream-2 returned to the port of Kaliningrad
Reuters: US will punish all those involved in the construction of "Nord stream – 2"
The Swiss-Dutch company Allseas stopped the construction of the "Nord stream-2"
A new lawsuit for "Gazprom": what does "Naftogaz" in the Stockholm arbitration?
Add a comment
Сomments (0)
News Analytics
The capacity of the domestic steel market in Ukraine in January-March decreased19-04-2021, 10:33
In Russia, there is an exuberant demand for agricultural machinery19-04-2021, 10:24
Iran is satisfied with the reaction of the world community to 60% enrichment of18-04-2021, 13:24
Gas prices in Ukraine have reached a record value over the past two years -16-04-2021, 17:24
Ukrmetallurgprom asks the Antimonopoly Committee to allow Metinvest to bid for16-04-2021, 17:23
World Steel Association predicts a good year for metallurgists15-04-2021, 18:19
World Steel Association defines green steel and its variations12-04-2021, 13:14
China unlikely to cut steel capacity in 2021 due to high steel prices07-04-2021, 12:11
Scrap metal market at the beginning of April02-04-2021, 11:10
Rising Chinese Prices Fueled Rising Global Steel Prices - MEPS25-03-2021, 18:54
Sign in with: