Uralvagonzavod put into operation 334 units of new equipment in 2020

In recent years, Uralvagonzavod has been actively introducing laser and waterjet cutting units. 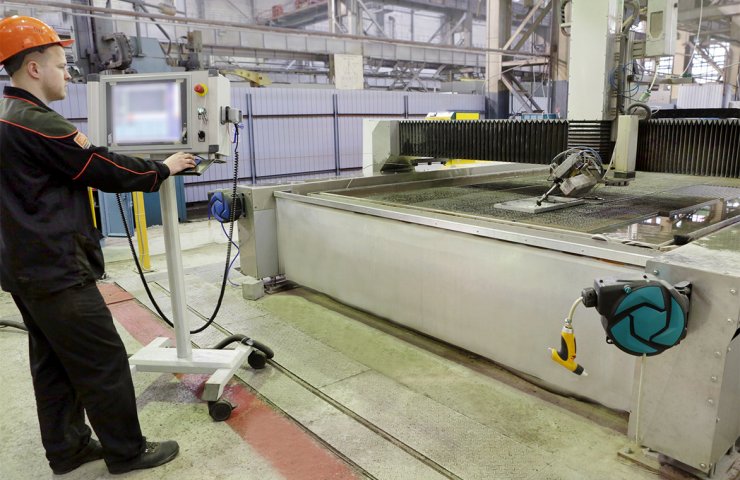 In 2020, Uralvagonzavod (part of the Concern UVZ is a part of Rostec State Corporation) put into operation 334 units of technological equipment. Investments in technical re-equipment and reconstruction of production have increased 3 times compared to 2019. The new equipment is intended for the manufacture of special equipment at UVZ, the production of railway rolling stock and other civilian products.

Technical re-equipment is carried out both within the framework of the Federal Target Program and at the expense of the enterprise's own funds. In 2020, it primarily affected the departments of mechanical assembly production: 223 units of equipment were put into operation here. Most of them were modern machine tools and high-performance multi-axis machining centers. Assembly and test benches and devices for assembly and welding were put into operation in the wagon assembly shops. Welding, pressing and forging equipment was purchased for metallurgical production. In addition, new bridge cranes, ventilation systems, etc. were installed in all divisions of the Uralvagonzavod.

Within the framework of the technical re-equipment program, much attention was paid to procurement equipment. In recent years, Uralvagonzavod has been actively introducing laser and waterjet cutting units. The use of these modern technologies allows avoiding the manufacture of expensive die tooling and not reconfiguring the pressing equipment, which is already involved in the production of serial products. And also significantly expand the range of materials used.

Another promising area of ​​technical re-equipment is the introduction of automated warehouse systems into production. They eliminate manual labor, save space, speed up warehouse operations and improve inventory control.

Today, the Russian Federation adopted the Strategy for the Development of the Machine Tool Industry, within the framework of which domestic plants are restoring their positions in the domestic market and increasing their export potential. Currently Uralvagonzavod cooperates with a number of such companies. With them, more than 10 contracts have been concluded and are being implemented for the supply of metalworking and foundry equipment for the Nizhny Tagil enterprise and its Chelyabinsk branch.

Recommended:
Ukrainian pipe manufacturer Centravis invests more than UAH 140 million in eco-modernization
BELAZ-HOLDING increased product sales in the first quarter of 2021 by 45.5%
Fitch Changes Metinvest Rating Outlook From Negative To Stable
On this topic
Uralvagonzavod presented the first refrigerated car in Russia
Uralvagonzavod signed a contract for 3 thousand gondola cars
Uralvagonzavod will change the assortment due to overproduction of open wagons
Uralvagonzavod will switch to the production of a new generation railway bogie
Production of wagons in Russia fell by a third
Uralvagonzavod implement a system to protect the cars from fraud
Add a comment
Сomments (0)
News Analytics
Rinat Akhmetov's engineering company Corum Group sent a delegation to India05-05-2021, 21:09
A mining and metallurgical complex will be created in the Bayan-Undur somon of05-05-2021, 19:39
In Ukraine, European requirements for the ecodesign of solid fuel boilers will05-05-2021, 15:30
April steel production of "Zaporizhstal" increased in annual comparison by05-05-2021, 15:27
Germany plans to achieve carbon neutral economy by 204505-05-2021, 12:28
The current state of the market is ideal for the sale of rolled steel - IREPAS04-05-2021, 18:41
Global hydrogen demand to grow 7-fold by 2070 - PwC21-04-2021, 12:31
World Steel Association predicts a good year for metallurgists15-04-2021, 18:19
World Steel Association defines green steel and its variations12-04-2021, 13:14
China unlikely to cut steel capacity in 2021 due to high steel prices07-04-2021, 12:11
Sign in with: