Metallurgists' protests in Spain escalated into riots: there are wounded and arrested

In Seville, a meeting is taking place between trade unions and employers in the metallurgical industry with the participation of representatives of the Ministry of Employment. Negotiations have been going on for 12 hours, and no one wants to give in. The trade union believes that "this is not a reason to suspend the indefinite strike, so we continue information pickets in various work centers." 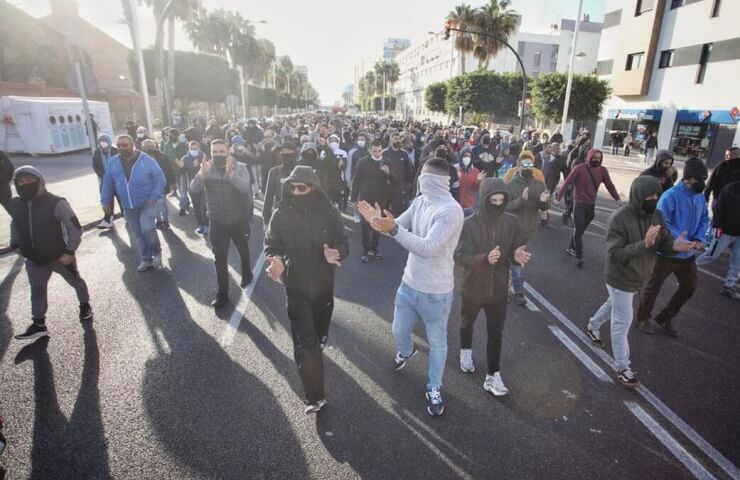 After unions and employers broke off negotiations and could not reach an agreement, protests began in Cadiz, Spain, which have been going on for the third day. Workers block roads and railways in the province. The action was organized by trade unions seeking an indexation of wages taking into account the growth of inflation in the EU.

Most of the protesters are involved in servicing the local port. On the eve, several groups of strikers clashed with the police, there are detainees. At the moment, Spanish activists have completely blocked the city center.

The police warn of a huge traffic jam that formed at the entrance to Cadiz across the 1812 Constitution Bridge due to the actions of protesters in urban areas. Also, traffic inside the city is paralyzed, residents cannot get to the supermarket and the city hospital.

At least 25,000 workers are participating in the strike, but the exact number of pickets is not known.

The union said workers will continue to act in defiance until FEMCA comes to a "coherent agreement that adapts to the current economic situation and workers' safety needs, especially after particularly difficult years of the pandemic." >

Финансовая аналитика, прогнозы цен на сталь, железную руду, уголь и другие сырьевые товары. More news and analytics on Metallurgprom telegram channel - subscribe to get up-to-date market information and price forecasts faster than others.
Сomments
Add a comment
Сomments (0)
On this topic
Metallurgists of Kryvyi Rih celebrate May 1 with protests in the city center
ArcelorMittal Kryvyi Rih will raise salaries by 10% in two stages if it receives the consent of the
VostGOK workers blocked three highways protesting against non-payment of wages
The protest action of the workers of the VostGOK uranium mining mines will continue around the clock
Confederation of free trade unions of Ukraine supported the protests in Chile
World's first 3D-printed bridge in Amsterdam's red light district
Recommended:
Ukraine and Great Britain signed an agreement on the abolition of import duties and tariff quotas
The United States banned the sale of knives and refrigerators to Russia
Steel prices in the UK rose by 50% after the start of the Russian special operation in Ukraine
News Analytics
Swiss oil and gas equipment manufacturer Sulzer leaves Russia24-05-2022, 13:08
BIR: European Commission's decision on scrap metal will be the most tragic24-05-2022, 11:41
Rejection of Russian palladium destroys markets24-05-2022, 11:41
Volvo starts mass production of electric trucks made from decarbonized steel24-05-2022, 10:09
European steel prices are directly dependent on Russian gas prices - MetalMiner24-05-2022, 10:52
US steel market sentiment becomes more price neutral05-05-2022, 10:15
The global high-strength steel market will grow steadily by 5% annually for the04-05-2022, 08:45
China steel inventories hit 13-month high amid COVID-19 outbreak30-04-2022, 16:38
Slowdown in global auto sector affects steel prices27-04-2022, 12:36
World alumina production reaches a record 138 million tons21-04-2022, 09:54
Sign in with: