An important area of ​​partnership between Ukraine and Germany is considered hydrogen energy - a tool for decarbonization of the economy. State Energy Efficiency together with the Ministry of Energy are working on the first draft of the national Hydrogen Strategy. 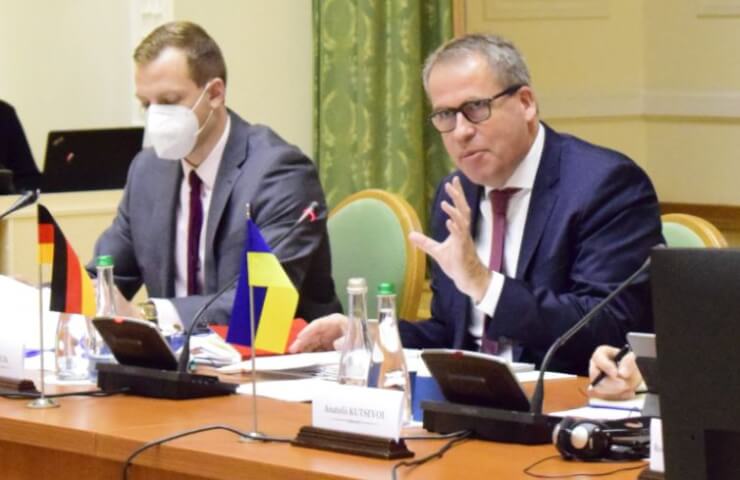 The Ukrainian-German talks were chaired by Olga Stefanishina - Vice Prime Minister for European and Euro-Atlantic Integration of Ukraine and Maria Flaxbart - Parliamentary State Secretary of the Federal Ministry for Economic Cooperation and Development.

The parties agreed to strengthen cooperation in the field of energy efficiency and decarbonization.

The Chairman of the State Energy Efficiency Agency Valeriy Bezus took part in the Ukrainian-German negotiations, who thanked the German Government for systematic and proactive support of reforms and outlined plans for further partnership.

“An important milestone was the adoption of the Law of Ukraine“ On Energy Efficiency ”, which is being developed, incl. with the help of the German Government, in particular the GIZ. Now, among the main priorities for the Agency in the near future is the development and adoption of more than 40 by-laws, in order to ensure the effective implementation of the law in accordance with European directives. In this regard, it is important to continue and strengthen cooperation, "Valery Bezus emphasized.

The Agency conducts and will continue to work together with GIZ to stimulate the implementation of energy management systems in different sectors of the economy, to conduct energy audits.

“I would also like to emphasize support for the development of the educational and scientific direction in energy efficiency. This issue must be considered from two sides: from the point of view of the introduction of scientific and educational programs in this area, as well as the urgent modernization of educational institutions and science, "- said V. Bezus.

An important area of ​​partnership between Ukraine and Germany is considered hydrogen energy - a tool for decarbonization of the economy. State Energy Efficiency together with the Ministry of Energy are working on the first draft of the national Hydrogen Strategy.

In turn, El Volker, Regional Commissioner of the Federal Ministry for Economic Cooperation and Development of Germany, noted the significant progress of reforms in Ukraine, the adopted basic law and the importance of further joint work in the field of energy efficiency, which is an important component of energy security and decarbonization.

Финансовая аналитика, прогнозы цен на сталь, железную руду, уголь и другие сырьевые товары. More news and analytics on Metallurgprom telegram channel - subscribe to get up-to-date market information and price forecasts faster than others.
Сomments
Add a comment
Сomments (0)
On this topic
State Energy Efficiency of Ukraine noted the priority of the "green" transition
Ukraine will be able to become a strategic partner of the EU by implementing its hydrogen strategy
Representatives of Ukraine and Germany discussed the prospects for cooperation in the
CB "South" was visited by a delegation from China
Ukraine needs an effective document for the development of hydrogen energy - Ministry of Energy
State Energy Efficiency of Ukraine and the German Energy Agency signed a Memorandum of Cooperation
Recommended:
Grain harvest in Ukraine in 2022 will be reduced by 34% - forecast from Alfa-Bank Ukraine
Metallurgical plant in Krivoy Rog continues to operate at 20% of installed capacity
The largest shareholder of gold production in Russia donates 100% of shares to an Islamic fund
News Analytics
The largest producer of titanium raw materials in Ukraine OGCC will sell25-05-2022, 20:48
Glencore accused of bribery in London pleads guilty in the US25-05-2022, 10:44
Swiss oil and gas equipment manufacturer Sulzer leaves Russia24-05-2022, 13:08
BIR: European Commission's decision on scrap metal will be the most tragic24-05-2022, 11:41
Rejection of Russian palladium destroys markets24-05-2022, 11:41
US steel market sentiment becomes more price neutral05-05-2022, 10:15
The global high-strength steel market will grow steadily by 5% annually for the04-05-2022, 08:45
China steel inventories hit 13-month high amid COVID-19 outbreak30-04-2022, 16:38
Slowdown in global auto sector affects steel prices27-04-2022, 12:36
World alumina production reaches a record 138 million tons21-04-2022, 09:54
Sign in with: