On Tuesday, December 14, miners from the East and West of the country intend to go to Kiev to picket the President's Office, Cabinet of Ministers and Parliament on Wednesday. 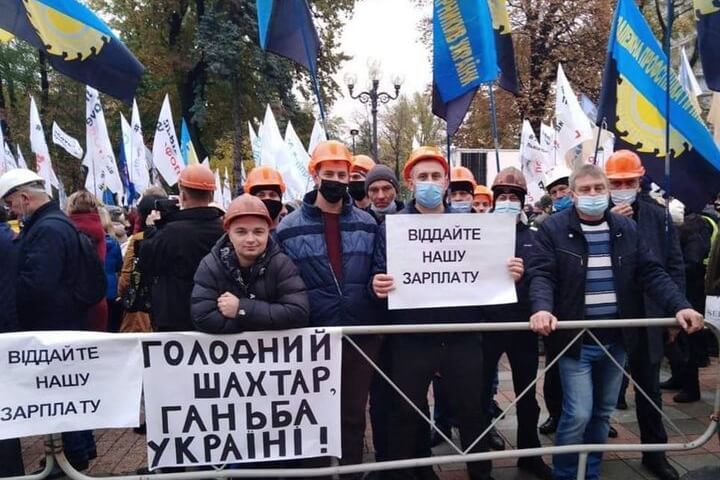 According to the press service of the Independent Trade Union of Miners of Ukraine, on December 15, miners from all over Ukraine will gather in Kiev and picket the buildings of the government quarter. The miners' demand is to pay off wage arrears, which by the end of the year will amount to almost 3 billion hryvnia.

“335 million hryvnias allocated to pay wages this week do not resolve the issue of closing the wage debt. Of these funds, part of the debt was paid only to underground workers. And what about those employed on the surface, who last received their wages in August ?! ”- ask the trade union.

The miners are determined because they are tired of promises and want to celebrate the New Year with the money they received and at the festive tables.

The Independent Trade Union of Miners of Ukraine has once again called on the authorities to “stop bullying the miners and give them their honestly earned hard and dangerous work.

Let's remind that on Wednesday, December 8, 300 million hryvnias were transferred to the state mines of Ukraine to pay salaries to miners. This amount is the second part of the funds allocated in accordance with the amendments to the State Budget on the additional direction of one billion hryvnia for payments to miners.

Also it was reported that on Thursday, December 9, the State Ecological Inspectorate of Ukraine filed a claim for more than 430 million hryvnias to the Buzhanska Mine enterprise of the Volynugol association for the illegal mining of more than 50 thousand tons of coal.

Финансовая аналитика, прогнозы цен на сталь, железную руду, уголь и другие сырьевые товары. More news and analytics on Metallurgprom telegram channel - subscribe to get up-to-date market information and price forecasts faster than others.
Сomments
Add a comment
Сomments (0)
On this topic
Miners of Lviv region go to Kiev to "beat out debts" on wages
Trade unions threaten the Ukrainian authorities with an all-Ukrainian strike of miners
Miners go to Kiev to protest: will demand a billion hryvnia
In Luhansk region the miners refused to come to the surface
The Ministry of energy of Ukraine reported about the repayment of wage arrears to miners
Tomorrow in Kiev is expected protests by miners demanding to dismiss A. Gerus
Recommended:
Europe's largest pure hydrogen plant to be built in the Netherlands
Japan's Nippon Steel starts buying gas at record high prices
China reduced steel exports in July by one million tons or 12%
News Analytics
India prepares to lift export duties on steel09-08-2022, 08:34
Russian metallurgists will need more than 10 years to replace imports of key09-08-2022, 07:23
China reduced steel exports in July by one million tons or 12%08-08-2022, 17:41
World steel prices have moved from a protracted fall to growth08-08-2022, 16:27
Ferrexpo's net profit in the first half of the year decreased by 88%03-08-2022, 10:20
The US market may begin a collapse in prices for thick sheet14-07-2022, 09:39
High iron ore shortage could halt metallurgy's green transition28-06-2022, 14:02
Price volatility hits global steel market27-06-2022, 19:28
Recovery in China could be key to rising global steel prices - MEPS24-06-2022, 14:00
Conflict in Ukraine spurs Europe's drive for clean energy03-06-2022, 12:14
Sign in with: