Despite the difficult weather conditions, the reconstruction work was carried out in two shifts and on weekends. 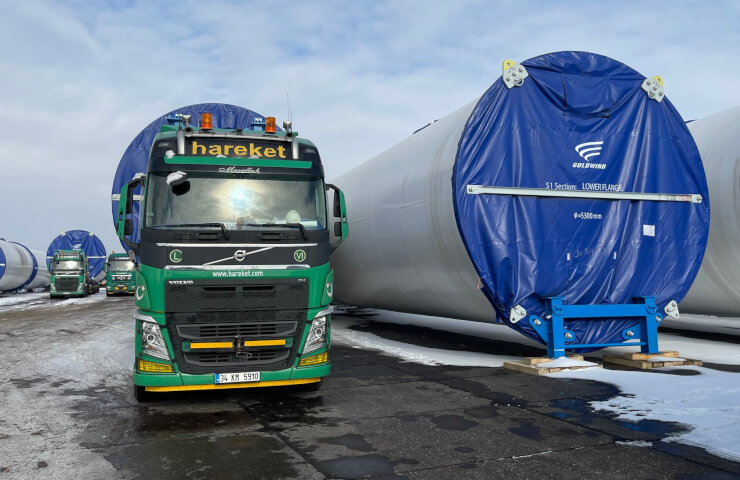 In order for large-sized elements for wind turbines to be able to reach their destination without hindrance, construction work was carried out on the territory of the Yuzhny State Commercial Sea Port to raise overpasses on the road from the VRR-2 berths to the South entrance.

In a short time, the port staff reconstructed all four flyovers. And for one of them, a new metal structure, the so-called "truss", was made on higher support points.

The complexity of these works was due to the fact that a large number of pipes and networks run along this overpass, which in no case could not be dismantled. But after the design department of the State Enterprise "MTP" Yuzhny "developed a technical solution, the builders managed to raise the lower tier of the structure.

Despite the difficult weather conditions, the reconstruction work was carried out in two shifts and on weekends. After lifting and expanding the flyovers, the first batches of large-sized wind turbine towers have already successfully left our enterprise and reached their destination.

Earlier it was reported that in January 2022 SE "MTP" Yuzhny "handled more than 1.3 million tons of cargo. One million tons are Ukrainian exports, mainly represented by iron ore, and 300 thousand tons are imports. 94% of imports are thermal coal for Ukrainian thermal power plants, and the rest is various equipment, including almost 7 thousand tons for wind power plants actively built in the region.

Финансовая аналитика, прогнозы цен на сталь, железную руду, уголь и другие сырьевые товары. More news and analytics on Metallurgprom telegram channel - subscribe to get up-to-date market information and price forecasts faster than others.
Сomments
Add a comment
Сomments (0)
On this topic
Yuzhmash told whether it is possible to launch reusable rockets from the Black Sea
Metallurgical lobby of Ukraine requires the government to ensure transshipment of ore ports
Mikheil Saakashvili walked along the berths of the Mariupol Sea Trade Port
How the reform of the electricity market in Ukraine can lead to a collapse and what to do about it
TPK demonstrates the benefits of using steel structures
Ukrainian hydrogen for Europe: an image of the future or a soap bubble?
Recommended:
Vitkovice Steel stops steel production due to anti-Russian sanctions
ArcelorMittal predicts fall in global steel demand due to war in Ukraine
Dneprospetsstal restarted stainless steel production in Zaporozhye
News Analytics
The largest producer of titanium raw materials in Ukraine OGCC will sell25-05-2022, 20:48
Glencore accused of bribery in London pleads guilty in the US25-05-2022, 10:44
Swiss oil and gas equipment manufacturer Sulzer leaves Russia24-05-2022, 13:08
BIR: European Commission's decision on scrap metal will be the most tragic24-05-2022, 11:41
Rejection of Russian palladium destroys markets24-05-2022, 11:41
US steel market sentiment becomes more price neutral05-05-2022, 10:15
The global high-strength steel market will grow steadily by 5% annually for the04-05-2022, 08:45
China steel inventories hit 13-month high amid COVID-19 outbreak30-04-2022, 16:38
Slowdown in global auto sector affects steel prices27-04-2022, 12:36
World alumina production reaches a record 138 million tons21-04-2022, 09:54
Sign in with: