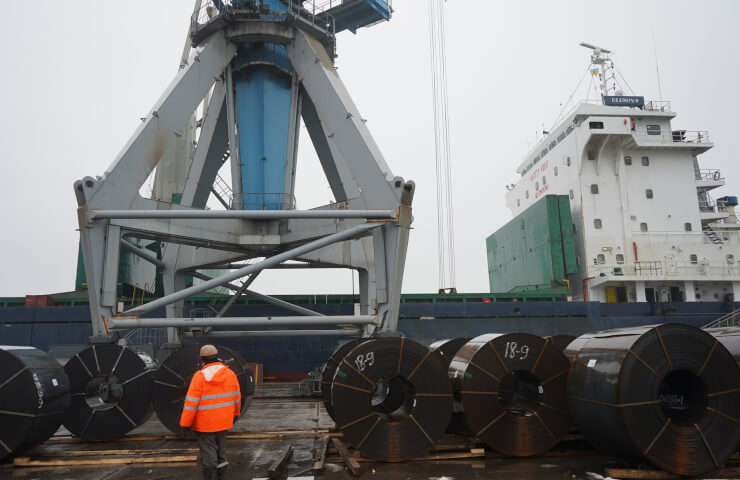 The Free Trade Agreement between Ukraine and Turkey, signed in Kiev on February 3, is the result of 15 years of negotiations and opens up many opportunities for Ukrainian businesses. This was reported by the government of Ukraine on Thursday evening.

In particular, it is indicated that as a result of the agreements reached, the metallurgical enterprises of Ukraine will be able to increase their exports to Turkey by at least 411 thousand tons annually. This is the quota for 167 goods fixed in the deal. For 510 out of 840 metallurgical goods, a zero duty is generally established.

At the same time, Ukraine retains duties on the export of scrap metal, used cars and second-hand goods, and establishes three and five-year transitional periods for duties on vehicles and light industry products. According to the government, this will protect the domestic producer.

“We will not only strengthen our economic presence in the Pan-Euro-Med region, but also use it as a bridge to develop new markets. Including - in the Persian Gulf and Southeast Asia. We will strengthen the strategic partnership between Ukraine and Turkey, as well as relations with the countries of the Black Sea basin. This is very important, given the intensification of aggression on the part of the Russian Federation,” said First Vice Prime Minister - Minister of Economy of Ukraine Yulia Sviridenko.

According to Oleksandr Kalenkov, president of the association of enterprises "Ukrmetallurgprom", the project presented by the Ministry of Economy took into account many proposals of metallurgists. Although metallurgists hoped for a complete zeroing of duties, because there are no discriminatory restrictions on Turkish metal from Ukraine, the signed agreement with Turkey is a step in the right direction.

“Ukrainian producers still bring a lot to Turkey - about 16% of all exports. So far, we are supplying semi-finished products in the processing mode, and the Turks export the rolled metal produced from them further, thereby keeping the added value for themselves,” Kalenkov noted. “The agreement signed by the presidents has yet to be ratified by the Verkhovna Rada, after which we can wish our metallurgists good luck in expanding their presence in the Turkish market!”

Финансовая аналитика, прогнозы цен на сталь, железную руду, уголь и другие сырьевые товары. More news and analytics on Metallurgprom telegram channel - subscribe to get up-to-date market information and price forecasts faster than others.
Сomments
Add a comment
Сomments (0)
On this topic
Ukrainian ferroalloy producers warn of negative consequences of agreement with Turkey
Ukrainian industrial associations have announced the threat of a secret agreement with Turkey
Turkish business intends to invest in Ukrainian renewable energy and pharmaceuticals
Scrap collectors of Ukraine actively protest against the extension of the duty on the export of
The Verkhovna Rada of Ukraine extended the duty on the export of ferrous scrap
Scrap collectors of Ukraine are surprised by the statements about the deficit of scrap metal at the
Recommended:
China's iron and steel producer price index up 5.6% in April
The United States banned the sale of knives and refrigerators to Russia
US steel market sentiment becomes more price neutral
News Analytics
The largest producer of titanium raw materials in Ukraine OGCC will sell25-05-2022, 20:48
Glencore accused of bribery in London pleads guilty in the US25-05-2022, 10:44
Swiss oil and gas equipment manufacturer Sulzer leaves Russia24-05-2022, 13:08
BIR: European Commission's decision on scrap metal will be the most tragic24-05-2022, 11:41
Rejection of Russian palladium destroys markets24-05-2022, 11:41
US steel market sentiment becomes more price neutral05-05-2022, 10:15
The global high-strength steel market will grow steadily by 5% annually for the04-05-2022, 08:45
China steel inventories hit 13-month high amid COVID-19 outbreak30-04-2022, 16:38
Slowdown in global auto sector affects steel prices27-04-2022, 12:36
World alumina production reaches a record 138 million tons21-04-2022, 09:54
Sign in with: