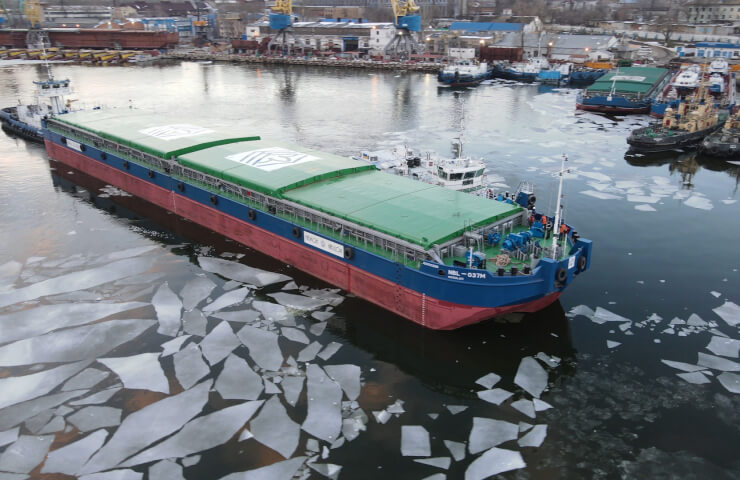 The first 100-meter barge of the modernized V5000M project, manufactured by the Nikolaev shipbuilding plant NIBULON, set off on its first voyage with a cargo of corn to the outer road of the Nikolaev Sea Port (near the city of Ochakov). The products will be shipped to a foreign vessel and delivered to the Iberian Peninsula - to Spain.

According to the technical specifications, the V5000M project has a length of 101 m and a width of 17 m, a draft of 3.75 m, 2 holds with a total capacity of 7000 cubic meters. m. Navigation area - mixed (river-sea), class - ice. An important feature of the vessel is the unique modernized design of the bow and stern, which significantly improves the maneuverability and maneuverability. At the same time, its carrying capacity of 5000 tons is the largest among other non-self-propelled vessels of the company. In general, today V5000M is the most modern shipbuilding project of the plant in the general list of non-self-propelled ships built.

Note that in total the NIBULON shipping company ordered the construction of 4 such vessels, which should be built at the beginning of the new marketing year. In the near future, the shipyard will deliver the second unit and is actively working on the construction of the rest. In general, in 2022, the company plans to receive 6 new non-self-propelled vessels and, thus, fully meet its own needs for efficient operation in the outer roads. This will make it possible to comprehensively improve the work of the shipping company in this area.

The increase in the company's fleet is an important direction in the implementation of the NIBULON national project for the development of shipping on the Dnieper and the Southern Bug and contributes to an increase in the volume of goods transported by waterways. In addition, such an initiative considerably unloads Ukrainian roads from trucks and contributes to their preservation. The effect of the operation of 1 non-self-propelled vessel of the V5000M project is equal to the “removal” of 208 trucks from Ukrainian roads in just one trip, and the operation of the entire transport fleet of the NIBULON shipping company with a total deadweight of 156,099 tons actually replaces the work of 6,500 trucks with cars.

Recall that in 2021, the company transported a record 4.15 million tons of various cargoes along Ukrainian rivers, and an increase in the fleet to 81 units allows increasing this figure.

Финансовая аналитика, прогнозы цен на сталь, железную руду, уголь и другие сырьевые товары. More news and analytics on Metallurgprom telegram channel - subscribe to get up-to-date market information and price forecasts faster than others.
Сomments
Add a comment
Сomments (0)
On this topic
Prospects for ship repair in Ukraine
Ukrainian NIBULON and French OSEA agreed to build 5 border boats
NIBULON shipbuilders are working on the sixth non-self-propelled vessel, the NBL-91 project
A barge with watermelons goes to Kiev from the south of Ukraine again
A dry cargo ship with a Ukrainian crew crashed in the Black Sea: two crew members were killed
The ports of Nikolaev and Kherson are the most expensive in terms of the cost of servicing ships in
Recommended:
European metallurgists criticized the plans of the European Commission to refuse Russian gas
Elon Musk sells $8.5 billion worth of Tesla shares
BIR: European Commission's decision on scrap metal will be the most tragic event in the last 40 years
News Analytics
The largest producer of titanium raw materials in Ukraine OGCC will sell25-05-2022, 20:48
Glencore accused of bribery in London pleads guilty in the US25-05-2022, 10:44
Swiss oil and gas equipment manufacturer Sulzer leaves Russia24-05-2022, 13:08
BIR: European Commission's decision on scrap metal will be the most tragic24-05-2022, 11:41
Rejection of Russian palladium destroys markets24-05-2022, 11:41
US steel market sentiment becomes more price neutral05-05-2022, 10:15
The global high-strength steel market will grow steadily by 5% annually for the04-05-2022, 08:45
China steel inventories hit 13-month high amid COVID-19 outbreak30-04-2022, 16:38
Slowdown in global auto sector affects steel prices27-04-2022, 12:36
World alumina production reaches a record 138 million tons21-04-2022, 09:54
Sign in with: