The decision to suspend duties on the import of Ukrainian steel, introduced by Donald Trump in 2018, was taken by Washington to demonstrate support for the most important industry for Ukraine's budget. 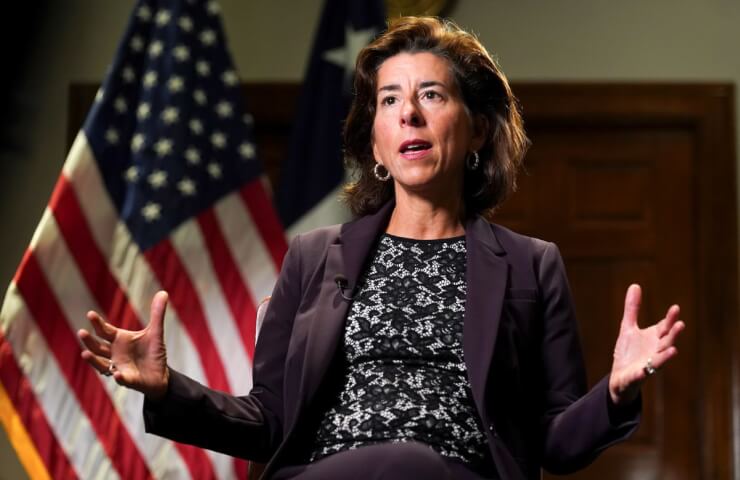 On May 9, the US suspended its 25 percent Section 232 tariffs on steel imports from Ukraine for one year, noting the industry's importance to its economy.

"We need to enlist their support and support one of the most important industries for the economic well-being of Ukraine" - announces Minister of Commerce Gina Raimondo announcing the suspension of tariffs.

For steel mills to continue to be an economic lifeline for the people of Ukraine, they must be able to export their steel. Today's announcement is a signal to the Ukrainian people that we are committed to helping them thrive in the face of Putin's aggression and that their work will make Ukraine stronger today and in the future," she added.

According to the US Department of Commerce, one in 13 Ukrainians work in the steel industry.

The US decision to abolish duties on imports of Ukrainian steel for a year is a positive signal, said Ukrainian Prime Minister Denys Shmigal. “We discussed this issue with Gina Raimondo in April during a meeting in Washington and within a few weeks we received a positive signal,” he said.

Earlier on April 27, the European Commission proposed to suspend import duties on all Ukrainian exports for one year. However, no official decision has yet been made.

The US has never imported any significant amount of steel from Ukraine. For all of 2021, steel shipments from Ukraine totaled 130,000 tons, less than 1% of total U.S. steel imports of 28.58 million tons in the same year.

The largest volume of Ukrainian steel imports to the United States was registered in 2011 and amounted to 325 thousand tons.

Финансовая аналитика, прогнозы цен на сталь, железную руду, уголь и другие сырьевые товары. More news and analytics on Metallurgprom telegram channel - subscribe to get up-to-date market information and price forecasts faster than others.
Сomments
Add a comment
Сomments (0)
On this topic
The Verkhovna Rada of Ukraine extended the duty on the export of ferrous scrap
Scrap collectors of Ukraine actively protest against the extension of the duty on the export of
China raises duties on American goods by $ 60 billion
The trade war between China and the United States has seriously escalated since September 1
Ukrainian metallurgists reminded Volodymyr Zelensky of American duties on steel
Russian feds spoke in support of the Ukrainian Interpipe
Recommended:
The largest steel company in Austria announced its readiness to stop gas supplies from Russia
Steel prices fall due to weakening European demand and problems in China
The United States refused to impose duties on Russian metals and increase tariffs on iron imports
News Analytics
The Belarusian steel plant was visited by the Ambassador of Kazakhstan to06-07-2022, 17:44
US steel prices fall to December 2020 levels06-07-2022, 13:40
Interpipe mastered a new type of railway wheels for the EU market06-07-2022, 12:15
Tesla in the second quarter reduced the supply of cars by 18%04-07-2022, 10:24
Steel prices fall due to weakening European demand and problems in China04-07-2022, 10:40
High iron ore shortage could halt metallurgy's green transition28-06-2022, 14:02
Price volatility hits global steel market27-06-2022, 19:28
Recovery in China could be key to rising global steel prices - MEPS24-06-2022, 14:00
Conflict in Ukraine spurs Europe's drive for clean energy03-06-2022, 12:14
US steel market sentiment becomes more price neutral05-05-2022, 10:15
Sign in with: