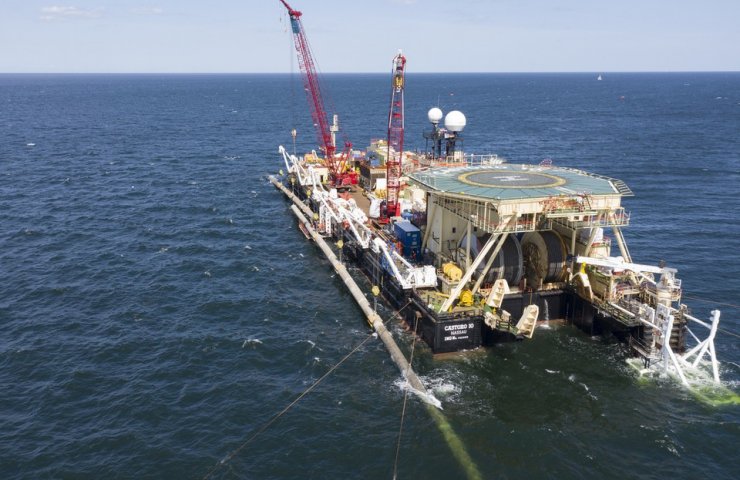 the Swiss-Dutch company Allseas said that has suspended work on construction of major pipeline from Russia to Germany to avoid "fatal" to her U.S. sanctions.

President of the United States Donald trump on Friday signed sanctions against companies building the Russian pipeline to Germany, which fears Congress will give the Kremlin a dangerous leverage over our European allies.

Sanctions, which the European Union stands were included in the extensive bill on defense spending trump, signed at a ceremony at joint base Andrews military air base outside of Washington, DC.

They are aimed at companies that are building the Nord Stream pipeline 2 cost about $ 11 billion under the Baltic sea with the aim of doubling the supply of Russian natural gas in the leading European economy, Germany.

Part of a private company Allseas, a specialist in underwater construction and laying of underwater pipeline, is an integral part of the Nord Stream project 2, headed by Russian state energy company Gazprom.

"pending the adoption of the Law on national defense (NDAA) Allseas has suspended its work on the laying of the Nord Stream pipeline 2", - reads the statement of the company dated 21 Dec. "Allseas will continue to work in accordance with the provisions of the law on liquidation and is awaiting guidance, including the necessary regulatory, technical and environmental clarification from the appropriate authority in the United States."

the Bill encourages the administration to identify a company working on the project for 60 days to apply sanctions. "Nord stream-2" will allow Russia to bypass Ukraine and Poland to deliver gas under the Baltic sea to Germany.

Gazprom takes over half of the planned project costs, with the remainder divided between five European energy companies: OMV, the Austrian, German Wintershall and Uniper, Royal Dutch Shell and French Engie.

In recent years, the United States became the largest producer of oil and gas in the world and is aggressively trying to sell their products abroad. The administration of the trump touting American liquefied natural gas as "gas freedom" which gives Europe an alternative to Russian supplies.

"the Federal government rejected such extraterritorial sanctions. They strike German and European companies and interfering in our internal Affairs," - said on the morning of Saturday, December 21, Deputy representative of the German government Ulrike Demmer.

do Not agree with the sanctions against the Russian gas pipeline and the Social democratic party of Germany (SPD).

"This unilateral step is a burden for the bilateral relations. The US imposed sanctions will not hurt to complete the work on Nord stream-2, but only delay it," - said the representative of the foreign policy of the SPD Nils Schmid (Nils Schmid).

the US Sanctions against the construction of "Nord stream-2" is not that other, as a manifestation of the unfair and illegal competition. This was stated by the Chairman of the Committee of the Federation Council international Affairs Konstantin Kosachev.
According to the Russian Senator, the inclusion of sanctions against Nord Stream 2 in the defense budget clearly States that for the US, energy is a weapon.

currently, the "Nord stream — 2" was built more than 93%. The total length of the main gas pipeline between Russia and Germany should be 1224 km for each of the two lines. The last site which was to put Allseas is in the territorial waters of Denmark. US sanctions involve the blocking of all us assets placed under sanctions companies that prohibit transactions with the defendants in the sanctions list, and the ban on entry of representatives of companies in the United States.

Recommended:
Ukraine retained its position in the world ranking of steel producers and rose in cast iron
World stainless steel production fell for the first time in 5 years
At the Yaroslavsky metallurgical plant in the Dnieper began to pay for new workers
On this topic
US sanctions can stop the construction of the "Nord stream – 2" in the waters of Denmark - Bild
The Turkish President announced the start of gas transit through Nord stream on 8 January
U.S. seeks closing of the companies involved in the construction of "Nord stream 2"
Nord stream - 2 will work on the first stretch of January 1, 2020
The Bundestag adopted the amendments to the Gas Directive for Nord stream 2
Denmark gave the green light to Nord stream-2
Add a comment
Сomments (0)
News Analytics
US Senate Adopts $ 1.9 Trillion Stimulus Package06-03-2021, 23:54
Tibet invests about $ 30 billion in infrastructure projects in 5 years06-03-2021, 14:39
Siemens Energy promised Deutsche Welle to closely monitor democracy in Belarus06-03-2021, 10:32
US and EU suspend the collection of duties that were imposed against each other05-03-2021, 22:48
Turboatom and Electrotyazhmash discussed prospects for cooperation under05-03-2021, 19:04
Spread between raw materials and high strength alloy steel in Europe increased01-03-2021, 20:21
Increase in prices is forecasted in the markets of steel raw materials -26-02-2021, 09:25
Troy ounce of gold will drop $ 500 in two years - Fitch25-02-2021, 18:29
Global iron ore production growth to outstrip cumulative production in India23-02-2021, 10:22
Fitch Ratings Warns of “Shocking Impact” on Fossil Fuel Exporters18-02-2021, 14:44
Sign in with: