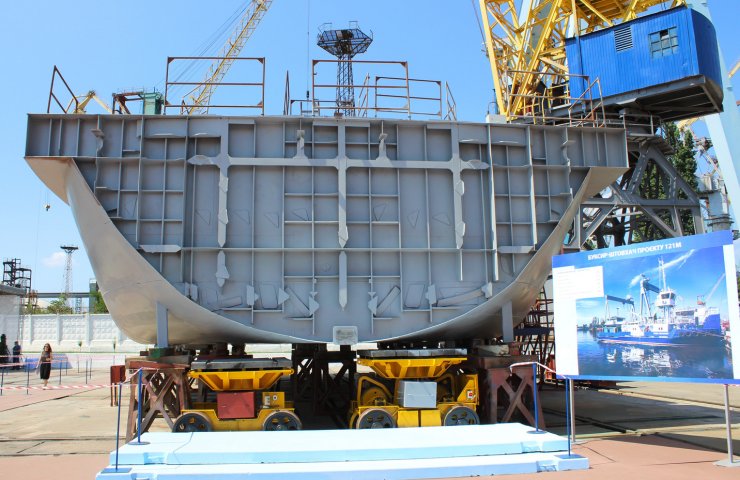 the leader of the Ukrainian shipbuilding company "NIBULON" became the official partner of the French company OCEA in the construction of border patrol boats in the framework of the implementation of the government project for enhancing Maritime security and protection of borders of Ukraine. The company built 5 of the 20 ships, the first of which should be launched already in 2021.

the Total amount of the contract with the French company OCEA is 136 500 000 euros. The French have chosen "NIBULON" as a single appropriate from the point of view of experience and technology contractor for the localization of production boats in Ukraine, which is one of the terms of the agreement.

According to General Director of "NIBULON", Hero of Ukraine Alexey Vadatursky, the company and its shipbuilding divisions continue to do everything so that Ukraine remained a country.

"we are very honored to implement the project, which will enhance Maritime safety and protection of borders of Ukraine, so we were independent Ukraine, was a powerful Maritime power. Our company today is able to put its mighty shoulder, as we are a strong team, our plant employs every fifth boat-Builder of Ukraine", - Vadatursky noted.

According to him, the project with ASEA will allow the company to access modern technologies of working with aluminum alloy, to expand the range of production vessels, as well as give the opportunity in the future to build military and civilian catamarans of various classes, including special purpose.

representative of the company, ACEA added that patrol boats that will be built "NIBULON" are bestsellers, because sold all over the world - France, Asia, the Middle East, and Latin America.

He stressed that the choice in favor of "NIBULON" as a partner in Ukraine was made with the professionalism, high quality work we have seen for many years in shipbuilding.

Recommended:
Hyundai and Ineos to collaborate on hydrogen vehicles
Consumption of rolled steel in Ukraine decreased by 5.6% in 10 months
Corum Group presented a modern mining mechanized complex
On this topic
The European Union has opposed the adoption of Ukraine's law on localization of production
Yuzhmash told whether it is possible to launch reusable rockets from the Black Sea
France and Ukraine to launch the project to upgrade drinking water supply system in the city of
AK "Bogdan motors" is ready to increase the localization of production of trolleybuses in Ukraine
At the Kherson shipyard SMG started cutting metal for the fourth tanker
American tanks Abrams and BMP Bradley appeared on the border with Belarus
Add a comment
Сomments (0)
News Analytics
German high-speed trains will ride on Ukrainian wheels30-11-2020, 16:26
Diplomatic squabble between Beijing and Canberra crashes coke imports into China30-11-2020, 15:53
The European Commission announced the reduction of industrial emissions by 2%30-11-2020, 15:43
Ukraine does not plan to release shells and cartridges in the coming years -30-11-2020, 15:59
UK investigates human death due to air pollution for the first time in history30-11-2020, 14:37
European Union scrap collectors worried about possible export restrictions18-11-2020, 10:41
Occupational diseases of workers in the extractive industry: types and ways to16-11-2020, 17:49
Eurofer expects recovery in EU steel demand05-11-2020, 09:47
Hot rolled carbon steel demand will continue to grow by 4% pa until 203004-11-2020, 16:14
Platts Steel Trade Review: China Will Decide Asia's Fate30-10-2020, 10:04
Sign in with: