The Vega launch vehicle with 53 micro- and nanosatellites launched from the Kourou Cosmodrome in French Guiana on Thursday night, September 3. 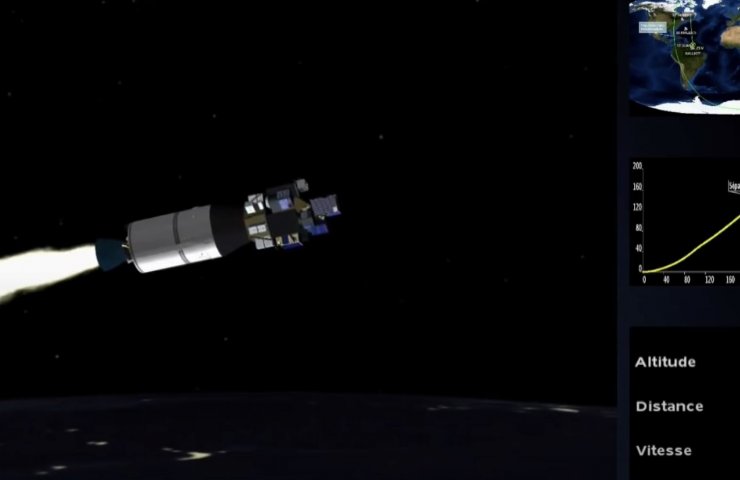 Launched within the framework of the European Space Agency's SSMS program, the French Vega launch vehicle equipped with the Ukrainian propulsion engine RD-843 launched 53 micro- and nanosatellites into sun-synchronous orbit: 7 microsatellites weighing from 15 to 150 kg and 46 cubesats.

This is Vega's first flight this year and the sixth launch for Arianespace. The rocket has already successfully put into orbit some of the 53 satellites on board, belonging to 21 customers from 13 countries.

Spacecraft weighing up to 150 kg will perform a variety of tasks, including Earth observation, telecommunications, scientific measurements, technology testing and educational projects.

Vega was originally scheduled to start on June 18, but due to unfavorable weather conditions it was postponed many times. Over 8 years, the project has carried out 15 launches, only one (last year) ended in failure.

Ukrainian liquid-propellant rocket engine RD-843, which is used as part of the liquid propulsion system of the 4th stage of the Vega launch vehicle, was developed by Yuzhnoye Design Bureau and is serially manufactured by PO Yuzhny Machine Building Plant.

The engine is designed for 5 starts in flight and can deflect up to 10 degrees in each direction. The engine weight is 16.5 kg, thrust - 0.25 tf.

Today, Yuzhmash continues to work on improving engine performance in order to expand the range of output payloads.

Recommended:
Ukraine for 8 months of 2020 reduced steel production by 6.2%
UN Secretary General demanded from Japan to stop financing coal power plants
A draft National Energy Efficiency Action Plan appeared in Ukraine
On this topic
Yuzhmash told whether it is possible to launch reusable rockets from the Black Sea
Strategy of defense in space
Yuzhmash successfully tested a rocket engine upper stage "Cyclone-4" (Video)
The Bank of Rinat Akhmetov joined the program "Affordable loans 5-7-9%"
Booster Firefly Aerospace caught fire during testing
CB "South" showed the head of the Verkhovna Rada of Ukraine of space technology
Add a comment
Сomments (0)
News Analytics
Indian state steel company to sell non-core assets19-09-2020, 18:50
Largest US steel company to lose $ 100 million in Q319-09-2020, 18:50
UN experts believe that the worst-case scenario for the Ukrainian economy can19-09-2020, 18:47
KZhRK miners' strike threatens with loss of sales markets without prospects of16-09-2020, 21:51
Privatization of the alcohol industry has started in Ukraine16-09-2020, 14:56
Iron ore prices to surpass six-year high soon16-09-2020, 10:32
World Oil Demand Peak May Be Over - BP15-09-2020, 09:05
China expands car market capacity by increasing demand for steel and metals11-09-2020, 10:56
Prices continue to rise in the long and flat steel markets08-09-2020, 14:25
Difference between ferrous and non-ferrous metal28-08-2020, 13:45
Sign in with: