The Vega launch vehicle deviated from the course during the operation of the fourth stage, which was powered by the Ukrainian RD-843 engine, developed at the Yuzhnoye Design Bureau. 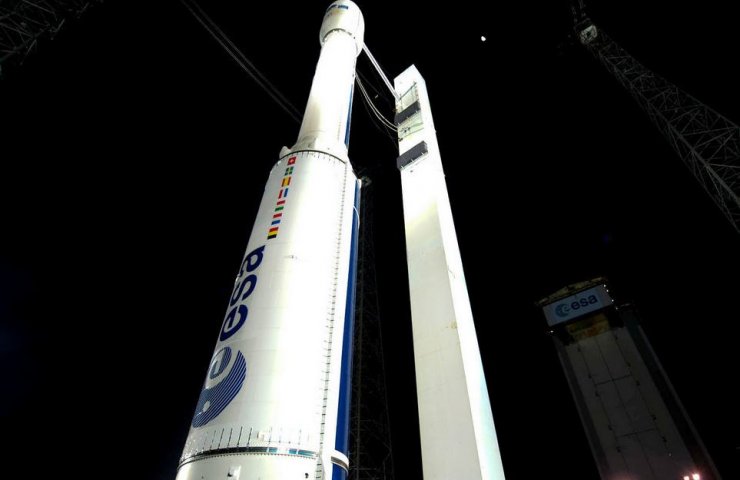 Today, at 3:52 am Kiev time, the next launch of the Vega carrier rocket from the Kourou cosmodrome in French Guiana took place. This is the second launch of the Vega LV in 2020 and already the seventeenth under the Arianespace program.

Two satellites were to be launched into orbit by a Ukrainian-powered launch vehicle: one for the European Space Agency (ESA) and Spain, the other for the French Space Agency (CNES).

"8 minutes after the start of the VV17 mission Vega, after the first ignition of the engine of the upper stage Avum, a deviation from the trajectory was detected, resulting in a loss of flight," said the launching company Arianespace in a press release. p>

“Unfortunately, during the work of the fourth degree, telemetry was received on its deviation from the specified trajectory. The satellites have been declared lost, "says the statement on the official page of Yuzhmash on Facebook.

At the fourth stage of the Vega, a Ukrainian-made RD-843 engine is installed. RD-843 is a liquid-propellant jet engine developed by the Ukrainian design bureau Yuzhnoye. The engines are manufactured at the Yuzhmash plant in Dnepropetrovsk.

Финансовая аналитика, прогнозы цен на сталь, железную руду, уголь и другие сырьевые товары. More news and analytics on Metallurgprom telegram channel - subscribe to get up-to-date market information and price forecasts faster than others.
Сomments
Add a comment
Сomments (0)
On this topic
Yuzhmash: "human factor" could be the reason for the failure of Vega rocket launch
European space project will provide Ukrainian Yuzhmash with work for the coming years
Yuzhmash told whether it is possible to launch reusable rockets from the Black Sea
A launch vehicle with a Ukrainian engine successfully launched from a cosmodrome in French Guiana
Yuzhmashevsky engine successfully launched a French rocket into Earth orbit
A launch vehicle with a Yuzhmash engine successfully launched from a cosmodrome in the Atlantic
Recommended:
The former president of Motor Sich was accused of aiding terrorists
European steel price rise that began in January will be short-lived - MEPS
ArcelorMittal invests $120m in US green steel company
News Analytics
Sanjeev Gupta's Liberty Steel Seemed as Potential Buyer of Aartee Bright Bar07-02-2023, 13:07
Tata Steel showed a steady increase in its revenues07-02-2023, 12:32
Eurofer expects EU steel demand to fall 4.6% in 2022 and 1.6% in 202305-02-2023, 13:31
EU Green Deal should encourage investment in mild steel projects: Eurofer02-02-2023, 16:32
Belarusian steel plant to operate at full capacity from February02-02-2023, 16:56
European stainless steel producers ready to raise prices31-01-2023, 16:16
S&P: Russia will continue to dominate the steel export market in the Black05-01-2023, 11:22
Fitch Analysts Predict Big Drop in Global Steel Consumption This Year14-12-2022, 13:59
Analysts predict 5% annual growth in the iron casting market through 203006-12-2022, 12:44
Commodity prices will fall, metals quotes will rise slightly - Focus Economics28-11-2022, 13:28
Sign in with: