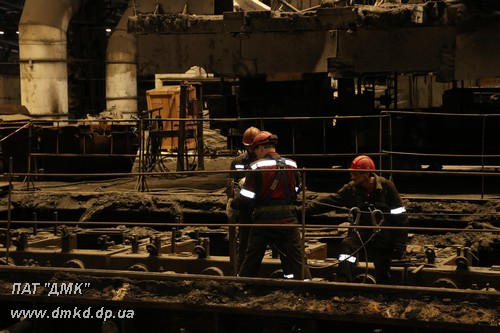 The CCM-2 recovery program provides for several stages of its implementation. Previously, the sixth, fifth, fourth, first and third (in accordance with the program execution order) machine strands were repaired. Now teams of repairmen have begun to restore equipment on the second stream.

Mikhail Anosov, deputy head of the converter shop for engineering:

“In the process of overhaul, we are not just restoring the second stream technologically, but reconstructing it for casting 335x500 billets. Thus, we will be able to increase the range of products and increase their competitiveness. Recently, we have only poured 335x400 billets with this machine.

For the production of a new type of product, it is necessary to replace the molds and the seed of the second strand of the machine. The new equipment is produced by the mechanical repair shop of the plant, the corresponding drawings were developed by the design and construction department of the DMK.

The main technological units of the stream during the modernization remain the same, during the overhaul they will be revised and, if necessary, replaced. Then the workers will start commissioning the hydraulic equipment and the cooling system.

The general contractor for the overhaul is Metinvest-Promservice LLC. CCM-2 will be put into operation by the end of the year, simultaneously with a new hoist-and-rotary stand, acquired by the plant earlier. Now the metal structures of the old stand are being dismantled and concrete work is being performed.