The new cars produced by the Kryukov Freight Car Building Plant are intended for international transportation and can move in both 1520 mm and 1435 mm tracks. 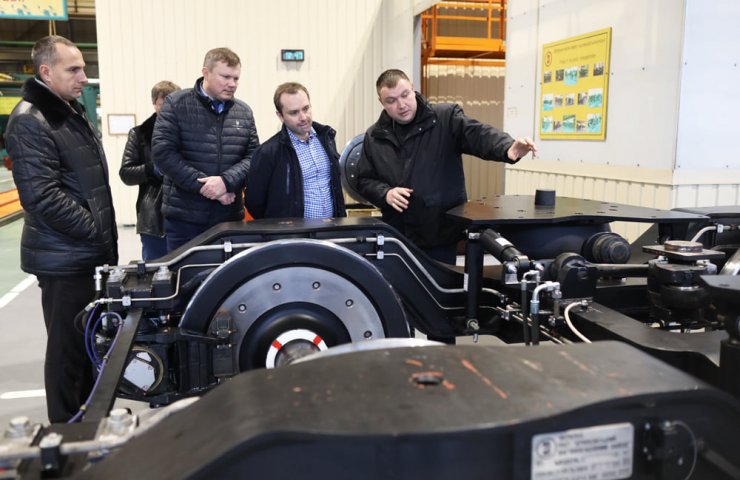 On December 15 and 16, 2020, a commission of specialists from Ukrzaliznytsia, headed by the director of the passenger transportation department Taras Pasichnyk, worked at the Kryukovsky Carriage Works (KVSZ) for the technical acceptance of two international class passenger cars of RIC size.

These two cars are designed and manufactured at KVSZ according to the standards of European railways. They are intended for international transport and can move both 1520 mm and 1435 mm.

Based on the results of the commission's work, a technical acceptance certificate was signed. In the near future, RIC cars will be sent to Kiev and will replenish the park of Ukrzaliznytsia.

On December 16, negotiations were held with the participation of the director of the Passenger Company branch of Ukrzaliznytsia Alexander Pertsovsky and Taras Pasechnik from Ukrzaliznytsia, as well as the chairman of the supervisory board of PJSC KVSZ Vladimir Prikhodko, chairman of the board Maxim Kramarenko, and other managers from KVSZ. It was about solving problematic issues of the past, the supply of serial cars in 2021, the creation of a promising rolling stock for passenger traffic.

Recommended:
Ukraine reduced the export of metal products for 2020 in monetary terms by 12%
Azerbaijan announced the start of commercial gas supplies to Europe
The only uranium mining enterprise in Ukraine reduced uranium production by 7.1%
On this topic
Krukovka Carriage Works disclosed the findings of the company's repeated internal audit
Ukrmetallurgprom Ukrzaliznytsya accused in abuse of monopoly position
In kvsz did not expect that they will have this year to build 90 wagons
New diesel train of Ukrainian production drove through the gates kvsz
Ukrzaliznytsia in the next year will build eurokolia in Western Ukraine
Top Manager kvsz called calls privacy office minifrastruktury to Hyundai "unpatriotic"
Add a comment
Сomments (0)
News Analytics
In 2021, Ukrzaliznytsia plans to repair more than 300 locomotives for UAH 426-01-2021, 15:30
Ukraine has enough "metals of the future" for the development of innovative26-01-2021, 14:40
High-speed railway line will connect the south of Kazakhstan and the capital of26-01-2021, 14:27
In 2021, an analogue of the US Department of Defense Research Projects Office26-01-2021, 11:24
Turkey plans to produce 100 tons of gold annually26-01-2021, 11:15
China will overtake the United States to become the world's largest economy in27-12-2020, 12:04
The shortage in the US steel market will last at least until the end of the25-12-2020, 11:36
Steel production in China to surpass one billion tons this year23-12-2020, 10:59
Iron ore prices hit seven-year high and continue to rise15-12-2020, 10:26
Prices for metallurgical raw materials continue to rise in regional markets10-12-2020, 11:32
Sign in with: