The hydroelectric power plant will be built in the middle part of the Komarnitsa River and envisages a 171 meter high concrete arch dam. 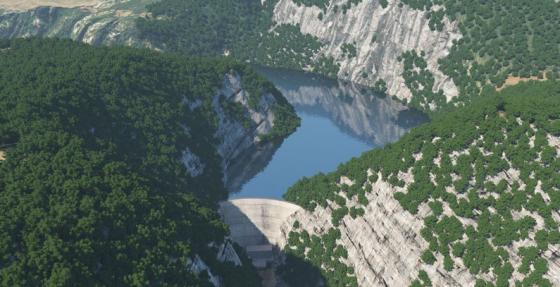 The state-owned electricity producer of Montenegro - Elektorprivreda Crne Gore (EPCG) - for the first time in 40 years received the right to build a hydroelectric power plant. The construction of the Komarnitsa HPP will cost between 260 and 290 million euros.

The first large hydropower project in modern Montenegro will have an installed capacity of about 172 MW and produce 213 GWh per year.

The hydroelectric power station will be built in the middle part of the Komarnitsa river near the town of Lontsi - 45 km upstream of the operating Piva PSP (installed capacity 342 MW). The project envisions a 171 m high concrete arch dam that will contain a 227 x 10⁶ m³ reservoir.

The construction of hydropower facilities designed mainly for the production of electricity will also lead to further development of the territories, since the reservoir will create favorable conditions for the development of tourism, agriculture and improve transport links.

The projected construction period for the Komarnitsa HPP is five years. A thousand workers will be involved in the work, and after the launch, about a hundred people will work at the hydroelectric power plant - mainly local residents.

Recommended:
Elon Musk invited Vladimir Putin to the online chat Clubhouse
China's non-ferrous metallurgy sector reports steady production growth
The head of Volkswagen considered hydrogen technologies unpromising for the automotive industry
On this topic
IRENA calls for accelerating the transition to renewable energy sources
The European Parliament: hydropower plays a major role in the Energy strategy of the European Union
How the reform of the electricity market in Ukraine can lead to a collapse and what to do about it
In the shops "Turboatom" work continues on equipment for the Ukrainian hydro power plants
The Dnieper hydroelectric power station can operate for another 100 years after reconstruction
Photo: On the Dniester PSP mounted impeller weighing 120 tons
Add a comment
Сomments (0)
News Analytics
Alisher Usmanov's USM Group will invest 40 billion rubles in a new HBI plant28-02-2021, 17:49
Emirates Steel to start production of hot rolled steel coils28-02-2021, 16:10
The Enhanced Partnership Agreement between the EU and Armenia comes into force28-02-2021, 14:45
Germany's second largest private bank closes branches in 15 countries28-02-2021, 13:33
Turkey is developing a hybrid rocket to fly to the moon for the 100th28-02-2021, 13:44
Increase in prices is forecasted in the markets of steel raw materials -26-02-2021, 09:25
Troy ounce of gold will drop $ 500 in two years - Fitch25-02-2021, 18:29
Global iron ore production growth to outstrip cumulative production in India23-02-2021, 10:22
Fitch Ratings Warns of “Shocking Impact” on Fossil Fuel Exporters18-02-2021, 14:44
Raw material prices rise by about 10.5% in January 2021 - Deutsche Industriebank12-02-2021, 10:48
Sign in with: