Within the framework of the meeting held at the Ministry of Strategic Industries of Ukraine, the issues of accelerating the implementation of world practice of a systematic approach in the development of domestic technological capabilities were raised. 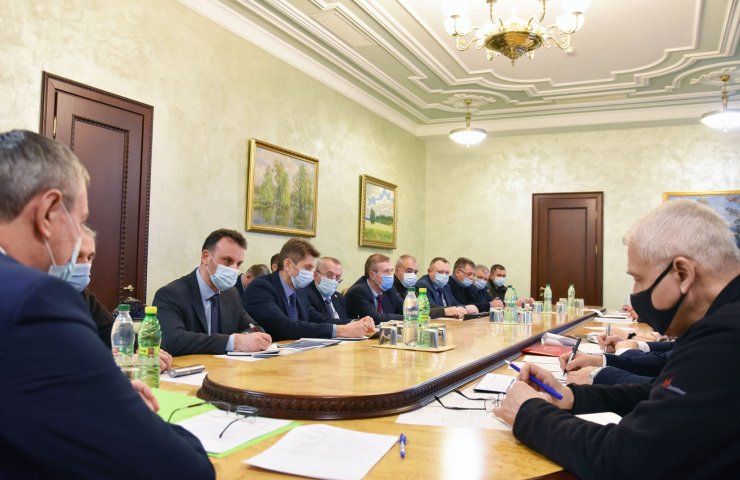 On February 1, Vice Prime Minister - Minister of Strategic Industries of Ukraine Oleg Urusky held a meeting on the creation of Ukrainian high-resolution Earth remote sensing spacecraft with major developers, as well as with customers of satellite services.

“We discussed a wide range of organizational and technical issues, as well as heard projects to create a constellation of satellites from the National Technical University of Ukraine, the I. Sikorsky Kyiv Polytechnic Institute and the Yuzhnoye Design Bureau,” said Oleg Urusky.

During the meeting, the Vice Prime Minister focused, in particular, on accelerating the fulfillment of the task of the President of Ukraine Volodymyr Zelenskyy to launch the Sich 2-30 (2-1) remote sensing spacecraft into near-earth orbit.

“We must take all the necessary measures to make this happen before the end of 2021, the 30th anniversary of Ukraine's Independence. And this is quite realistic, provided that the work is as efficient as possible and is an urgent need, ”Oleg Urusky emphasized.

According to him, the presence of spacecraft will not only contribute to solving a wide range of tasks, both in the interests of the economy and law enforcement agencies, but will also save budgetary funds that are now spent on the purchase of services provided by such vehicles abroad.

As a result of the meeting, the need to strengthen cooperation between the State Space Agency of Ukraine, the National Technical University "KPI" and the SE KB "Yuzhnoye" on joint projects was noted, attention was focused on the expediency of this year to accumulate all appropriate resources to solve the tasks, as well as on taking steps to launch the third PolyITAN-3 satellite, created by the National Technical University "KPI", into orbit.

“We have a paradoxical situation: Ukraine has a significant scientific and technical potential and practically everything in order to have its own group of spacecraft in low-earth orbit, however, unfortunately, it is absent. You can give various reasons for this, but the situation needs to be changed, ”concluded the Vice Prime Minister - Minister for Strategic Industries of Ukraine.

We are developing the PolyITAN-3 satellite together with the Poznan Polytechnic Institute - it will partially sponsor the purchase of flywheels and some elements for power supply systems. The device can be used for remote sensing of the Earth, environmental monitoring, earthquake prediction and ionospheric research. The main task of the satellite is to take photos and transmit data to Earth.

The Sich-2-1 satellite is being developed within the framework of the National Target Scientific and Technical Space Program of Ukraine and is intended to obtain digital images of the Earth's surface in the visible and near infrared ranges of electromagnetic waves, as well as to monitor the parameters of the Earth's ionosphere. p>

Recommended:
Interpipe plans to launch another workshop for the production of railroad cars. wheels in the second half of 2021
Boeing Recommends Suspension of 777 Aircraft with Pratt & Whitney 4000 Engines
Uranium mining company of Ukraine will develop a program to ensure competitiveness
On this topic
General Director of Yuzhnoye Design Bureau dies of coronavirus
Minister for Strategic Industries of Ukraine inspected YUZHMASH workshops
Yuzhmash told whether it is possible to launch reusable rockets from the Black Sea
CB "South" was visited by a delegation from China
CB "South" showed the head of the Verkhovna Rada of Ukraine of space technology
KB "South" was shown in Dubai lunar module (Video)
Add a comment
Сomments (0)
News Analytics
Coronavirus drove Belgian skiers to the slopes of the Charleroi waste heap07-03-2021, 13:52
US Steel focuses on the production of nanosteel for high-strength alloys07-03-2021, 13:46
Poland could lead the race in hydrogen steel technology07-03-2021, 11:29
US Senate Adopts $ 1.9 Trillion Stimulus Package06-03-2021, 23:54
Tibet invests about $ 30 billion in infrastructure projects in 5 years06-03-2021, 14:39
Spread between raw materials and high strength alloy steel in Europe increased01-03-2021, 20:21
Increase in prices is forecasted in the markets of steel raw materials -26-02-2021, 09:25
Troy ounce of gold will drop $ 500 in two years - Fitch25-02-2021, 18:29
Global iron ore production growth to outstrip cumulative production in India23-02-2021, 10:22
Fitch Ratings Warns of “Shocking Impact” on Fossil Fuel Exporters18-02-2021, 14:44
Sign in with: