Azerbaijan continues to be a key trade partner of Ukraine in the South Caucasus. 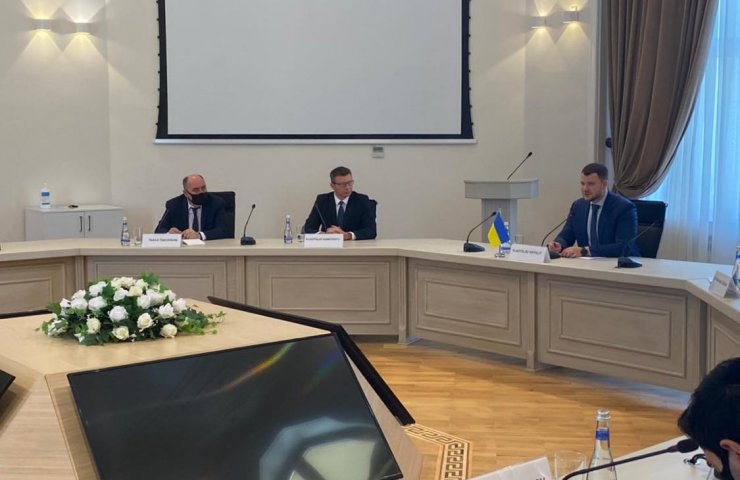 Minister of Infrastructure of Ukraine Vladislav Krikliy held talks with the Minister of Energy of the Republic of Azerbaijan and the chairman of the Azerbaijani part of the Joint Intergovernmental Ukrainian-Azerbaijani Commission on Economic Cooperation Parviz Shahbazov today, April 13. The meeting took place within the framework of the official visit of the Ukrainian government delegation to Azerbaijan.

The parties expressed their readiness to intensify cooperation in the context of restoring the infrastructure of the liberated regions of Nagorno-Karabakh and discussed the dates of the first meeting of the Working Group on Privatization to consider specific projects.

During the meeting, Vladislav Krykliy noted that despite the pandemic and crisis, Azerbaijan continues to remain a key trade partner of Ukraine in the South Caucasus and, for its part, the Ukrainian side is ready to further deepen bilateral relations.

The ministers also discussed the progress of both parties in the implementation of the protocol decisions of the last meeting of the Joint Ukrainian-Azerbaijani Intergovernmental Commission on Economic Cooperation, as well as in the implementation of joint infrastructure projects, in particular, in the construction of a service hub at the Chongar checkpoint in the Kherson region under participation of SOCAR investments.

Energy Minister Parviz Shahbazov proposed to hold the 13th meeting of the Joint Intergovernmental Commission in June or September this year in Baku.

Vladislav Krikliy also shared the agency's plans for the implementation of promising investment projects in the field of infrastructure and transport and invited representatives of Azerbaijani business to participate in them.

In addition, the parties discussed the importance and further steps to create a Ukrainian-Azerbaijani business council to promote and support public-private partnership projects.

Recommended:
ArcelorMittal and 11 other companies including Shell and Airbus form a hydrogen consortium
Denmark buys 100 electric trains from French Alstom for $ 3.2 billion
The structures of the Russian billionaire Mordashov blocked the payment of dividends at Turboatom
On this topic
China and Ukraine held the fourth meeting of the Intergovernmental Commission on Cooperation
Krikliy invited Austrian companies to participate in the selection of a manufacturer of electric
Vladimir Zelensky invited to adopt a programme of industry support of Ukraine
Concorde Capital told about the preparations for the privatization of the largest coal companies of
Ukraine and Belarus expand economic and trade cooperation
Ukrainian carriers will receive an additional 5000 Polish permissions
Add a comment
Сomments (0)
News Analytics
GFG Alliance lists French steel mills for sale12-05-2021, 11:37
Ukroboronprom approved a roadmap for overcoming the crisis of Kharkiv Aviation12-05-2021, 10:30
For 4 months of 2021, freight traffic on the Dnieper increased by 1.2 million12-05-2021, 10:41
Energomashspetsstal plant shipped over a thousand tons of metal products to12-05-2021, 10:18
Half of US states declare a state of emergency due to fuel shortages12-05-2021, 09:58
The current state of the market is ideal for the sale of rolled steel - IREPAS04-05-2021, 18:41
Global hydrogen demand to grow 7-fold by 2070 - PwC21-04-2021, 12:31
World Steel Association predicts a good year for metallurgists15-04-2021, 18:19
World Steel Association defines green steel and its variations12-04-2021, 13:14
China unlikely to cut steel capacity in 2021 due to high steel prices07-04-2021, 12:11
Sign in with: