Energoatom ordered a condenser from Turboatom worth 0.5 billion hryvnia for Zaporizhzhya NPP

On April 20, 2021, Turboatom JSC and SE NNEGC Energoatom signed an agreement for the manufacture and supply of a condenser for the Zaporizhzhya NPP. 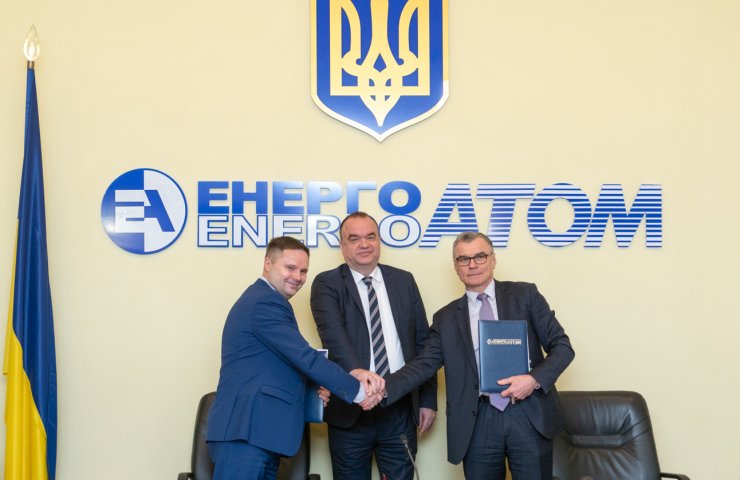 At the head office of SE NNEGC "Energoatom", Director General of JSC "Turboatom" Viktor Subbotin and Director of OP "Atomkomplekt" SE NAEK "Energoatom" corrosion-resistant material of the K-1000-60 /1500-2 turbine for power unit No. 1 of the Zaporozhye NPP.

The amount of the agreement signed with NNEGC Energoatom amounted to 525.8 million hryvnia. Equipment delivery time: April - May 2022.

Acting President of NNEGC Energoatom Petr Kotin noted: “This is a very important event for the Company. Energoatom has been confidently implementing the equipment modernization program for 15 power units of four Ukrainian NPPs since August 2019 and designed for five years. New capacitors are already in operation at three ZNPP units (No. 2, 3, 4). The production of a condenser for power unit No. 5 is nearing completion. Such works are planned for 2023 at power unit No. 6 of ZNPP.

General Director of JSC "Turboatom" Viktor Subbotin emphasized that this is an important contract for turbine builders, because it means an order in the amount of 0.5 billion hryvnia and the workload of the enterprise for more than a year. “I am very grateful to Energoatom for their trust,” added Victor Subbotin.

Director of OP Atomkomplekt Oleg Doroshenko noted: “It is difficult to overestimate the significance of this agreement. The work on replacing capacitors has both an economic effect in the form of additional electricity generation and a technical one - an increase in the reliability of operation of power units. ”

For the Zaporizhzhya NPP, which consists of 6 power units with a capacity of 1,000 MW, this will be the fifth new condenser out of six installed at the plant, which will replace Turboatom. Now the capacitors are successfully operating at power units 2, 3 and 4. For unit 5, Turboatom is completing the manufacture of a condenser and in May - June 2021 the equipment will be fully shipped to the station.

Recommended:
Mariupol Metallurgical Plant named after Ilyich increased production of rolled metal by 22.1%
Bosch opens new chip factory in Dresden six months ahead of schedule
Dneprovsky plant of Alexander Yaroslavsky modernizes the section of heating wells
On this topic
Energoatom accused VostGOK of short supply of uranium concentrate for 700 million hryvnia
Westinghouse and Energoatom signed a contract for the supply of nuclear fuel for the VVER-440
In the shops "Turboatom" work continues on equipment for the Ukrainian hydro power plants
Turboatom will take part in the modernization of the South Ukrainian nuclear power plant
At Turboatom presented the achievements of the economy of Ukraine in the last 100 days
In Kharkov, the metro station "Moskovsky Prospekt" was renamed into "Turboatom"
Add a comment
Сomments (0)
News Analytics
Metallurgical Plant "Zaporizhstal" performed overhaul of blast furnace No. 422-06-2021, 18:05
Since the beginning of the year, Ukrzaliznytsia has sold scrap of non-ferrous22-06-2021, 16:30
15 people detained due to an accident at an iron mine in China's Shanxi province22-06-2021, 15:38
World steel production soars to record 174 million tonnes in May22-06-2021, 13:28
The first train from Europe to China brought 82 Audi A8Ls22-06-2021, 13:58
European steel market is in confusion: price growth has slowed down, but no one21-06-2021, 17:40
Vaccinations fuel demand for platinum - World Platinum Investment Council08-06-2021, 12:55
Sharp price growth continues in the rolled metal market - Ukrpromvneshexpertiza08-06-2021, 11:04
Analysts note overheating of the global scrap metal market01-06-2021, 13:28
Hydrogen-fueled steelmaking could be competitive after 2050 - McKinsey19-05-2021, 14:22
Sign in with: