Not a single unauthorized person managed to enter the facility and commit a sabotage act, the press service of the company noted. 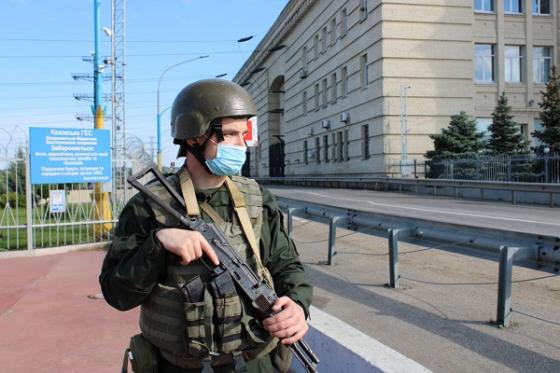 According to legend, sabotage and reconnaissance groups were preparing to commit a number of acts of sabotage at critical infrastructure facilities, including: the Kakhovsky shipping lock, the North Crimean canal and the Kakhovskaya hydroelectric power station.

Thanks to the well-coordinated and precise actions of the employees of the branch, the territory of the Kakhovka HPP was promptly surveyed. According to the search results, no foreign objects were found in the territory of the prohibited and controlled zone, including the water area of ​​the lower and upper reaches.

“Summing up the results of the exercises, we can confidently say that the work of the branch's security is organized properly. And it is precisely this that did not allow third parties to enter the facility and commit a sabotage act, - the director of the Department of Physical Protection, Regime and Security of Ukrhydroenergo Ihor Shevchuk comments on the results of the training. on the safety and protection of the population and territories from the negative consequences of emergencies ".

Финансовая аналитика, прогнозы цен на сталь, железную руду, уголь и другие сырьевые товары. More news and analytics on Metallurgprom telegram channel - subscribe to get up-to-date market information and price forecasts faster than others.
Сomments
Add a comment
Сomments (0)
On this topic
The General Director of Ukrhydroenergo inspected the work of the Kakhovka HPS
Ukrhydroenergo begins public hearings on the environmental assessment of the Kakhovka HPP-2
IRENA: hydropower will be critical to decarbonize the economy
The cargo terminal at the Kherson shipyard had the opportunity to serve vessels with a draft up to
In Ukraine, police were accused of involvement in the theft of coal from trains on an especially
IRENA calls for accelerating the transition to renewable energy sources
Recommended:
Brazilian steel industry expects modest growth in 2023: Aço Brasil
Analysts predict 5% annual growth in the iron casting market through 2030
Russian steel production fell by 6%
News Analytics
ArcelorMittal launches flagship carbon capture and recycling project in Belgium08-12-2022, 14:59
The South Korean government "ordered" the striking truckers to return08-12-2022, 11:04
India expands RoDTEP export incentive scheme to steel and iron08-12-2022, 10:28
Volkswagen Anhui's first pre-production NEV rolled off the assembly line08-12-2022, 10:17
Chinese steel exports up 28.2% - customs data07-12-2022, 23:43
Analysts predict 5% annual growth in the iron casting market through 203006-12-2022, 12:44
Commodity prices will fall, metals quotes will rise slightly - Focus Economics28-11-2022, 13:28
Platinum market to face shortage next year - WPIC22-11-2022, 18:25
Global steel demand falls and will fall by 2.3% in 2022: WorldSteel19-10-2022, 23:12
Iron ore prices fall to 11-month low15-10-2022, 10:36
Sign in with: